May Day and International Workers Day: An ancient celebration with Pagan and Communist roots

Info below is taken and combined from several sources

The 1st May is an ancient Northern Hemisphere festival, now known as ‘May Day’, which traditionally marked the return of spring. It is believed that the celebrations originated in agricultural rituals intended to ensure fertility for crops, held by the ancient Egyptians, Greeks, and Romans. Later developments included the Celtic festival of Beltane and the Germanic festival of Walpurgis Night. Today, many customs still mark this ancient festival, including the gathering of wildflowers and the setting up of a decorated May tree or Maypole, around which people dance.

The Festival of Flora
The Romans marked the occasion over two millennia ago with the Floralia, or Festival of Flora, a five-day ceremony to honour the Roman goddess of flowers. Flora was regarded as one of the most ancient goddesses of Roman religion, and was one of fifteen deities to have her own state-supported high priest, the flamen Florialis. A goddess of flowers, vegetation, and fertility, she received sacrifices in the sacred grove of the Arval Brothers, an archaic priesthood.

Floralia was marked by dancing, the gathering of flowers, and the setting aside of white togas in favour of more colourful garments. It was also a time for the Ludi Florales (six-day games), which was paid for by fines collected when public lands were encroached upon. Cicero mentions his role in organizing games for Flora when he was aedile in 69 BC.

The festival of Flora opened with theatrical performances, and concluded with competitive events and spectacles at the Circus and a sacrifice to Flora. In 30 AD, the entertainments at the Floralia presented under the emperor Galba featured a tightrope-walking elephant. The festival was eventually declared a Roman holiday by Julius Caesar and revellers are said to have worn garlands of fresh flowers while scattering seeds to promote agricultural bounty.

The Celtic Beltane
Beltane, which means “the return of the sun”, is the Gaelic May Day festival. Historically, it was widely observed throughout Ireland, Scotland and the Isle of Man. Celts believed the sun was held prisoner during winter months only to be released each spring to rule the summer sky, and they celebrated this mythic release with a fire ceremonies and a huge feast to mark the occasion. Rituals were performed to protect the cattle, crops and people, and to encourage growth.

Special bonfires were kindled, and their flames, smoke and ashes were deemed to have protective powers. People and their cattle would walk around the bonfire and sometimes leap over flames or embers. Beltane Fire Festival

As Europe became Christianized, pagan holidays lost their religious character and either changed into popular secular celebrations, as with May Day, or were merged with or replaced by new Christian holidays. The only significant Christianization of May day is localised to Germany where it is one of many historic days that were used to celebrate St. Walpurga (the saint credited with bringing Christianity to Germany).

The German Walpurgis – Walpurgis Night – Witches night out
In Germany, Walpurgis Night (Walpurgisnacht), the night from 30 April to 1 May, is when witches are reputed to hold a large celebration on the Brocken and await the arrival of spring. The night is so called because it is the eve of the feast day of Saint Walpurga, an 8th-century abbess in Germany. Local variants of Walpurgis Night are observed across Europe in the Netherlands, Germany, the Czech Republic, Sweden, Lithuania, Latvia, Finland and Estonia.

Saint Walpurga (more Catholic idiocy)
Saint Walpurga or Walburga (Old English: Wealdburg; c. 710 – 25 February 777 or 779), also spelled Valderburg or Guibor, was an English missionary to the Frankish Empire. She was canonized on 1 May ca. 870 by Pope Adrian II. Walpurgis Night (or “Walpurgisnacht”) is the name for the eve of her day, which coincides with May Day. See Wikipedia for more info 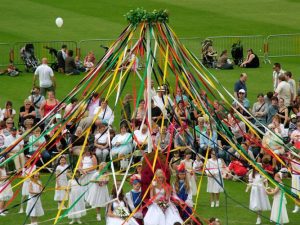 The May Pole
Maypole dancing continues to be one of the most popular May Day customs in Europe. Participants dance around a wooden Maypole, holding colorful ribbons that become decoratively intertwined. The dancers then change direction and repeat the steps in reverse, causing the ribbons to unwind. This is said to symbolize the lengthening of the days as summer begins.

Primarily found within the nations of Germanic Europe and the neighboring areas which they have influenced, its origins remain unknown. It has often been speculated that the maypole originally had some importance in the Germanic paganism of Iron Age and early Medieval cultures, and that the tradition survived Christianisation, albeit losing any original meaning that it had; however, more recent scholarship has found that the custom of the maypole arose in the context of medieval Christian Europe. It has been a recorded practice in many parts of Europe throughout the Medieval and Early Modern periods, although it became less popular in the 18th and 19th centuries. Today, the tradition is still observed in some parts of Europe and among European communities in the Americas. Source

What do Pagans and Witches think it is?
Beltane is the sensual Pagan festival of fire and fertility, and is also know as May Day–when we dance around an the omnipotent phallic symbol the maypole. The red and white ribbons woven around the maypole represent blood and semen; the sacred fusion of female and male energies that are the creative life force.(source)

So according to what Pagans believe, it is a sexual ritual. The may pole representing the male penis and the women are dancing around it to invoke a spell that is being cast for fertility, love or sexual desire.

And that sexual union? Brings us right back to the Maypole, essentially an enormous phallus, thrust deep into the earth, around which young men and women dance, weaving colored ribbons in encouragement of the earth’s (and their own) fertility. For many Pagans, dancing the Maypole is an enchanted experience, uniting the energy of the earth, and the energy of the sun to yield a bountiful harvest.(source)
Once again, ignorant people take part in this unaware of what it symbolizes. You are inviting demonic forces into your home and life when you take part!
If you go to the store to buy Meat, don't run to the Milk section or the Junk Food aisle looking for it!!