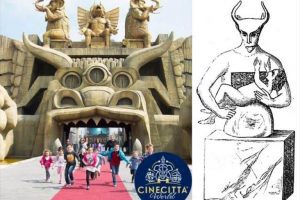 Leo Zagami – On your holiday in Rome, you could spend a day at ”Cinecittà World,” a few kilometers from the Italian capital, where you can find another disturbing adventure after visiting Moloch at the Colisseum, but please avoid bringing children. Yes, this is an amusement park set in the magical world of old Italian cinema, on the grounds of the old film studios of the legendary film producer Dino De Laurentis, but there is something strange going on here.

The entrance to this unusual theme park features the Temple of Moloch with a gigantic three-eyed head featured in the 1914 film ”Cabiria”; just like the Moloch statue placed at the Colosseum. This legendary Italian silent film was directed by Giovanni Pastrone with a screenplay written by the Italian Illuminati and poet, Gabriele d’Annunzio (33rd degree of the AASR), one of the inspirators of Fascism.

On top of the gigantic three-eyed head at the entrance we see the same statue of Moloch found at the Colosseum. The entrance of this theme park with a dark twist is from one of the most ominous scenes of the film “Cabiria,” where one hundred young children perish as offerings, but most Italians ignore this and bring their children inside Moloch anyway. 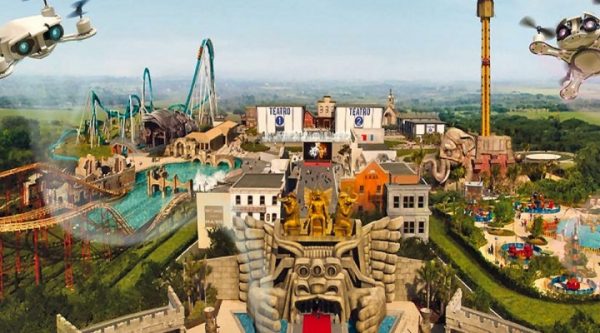 This is particularly symbolic for what is considered the entrance of a child’s theme park in Italy.  Also for some “strange” reason children under one meter  height go in for free. Does it please the pedophile elite? “Cinecittà World”  seems to be part of the Moloch Egregore built in Rome by the darkest cults to please the ancient god associated with child sacrifice.

The park re-opened on the 25th of June 2020 after the Covid-19 lockdown, ready for business, with clearly what is another copy of the Moloch statue on top of the entrance. So one starts to wonder how many of these monstrosities were built back in 1914 for this epic film?

Well if interested, Cinecittà World is located in Castel Romano, a few kilometers from Rome, that you can reach by car taking via Pontina (exit 26) or by a shuttle service from Termini station.

They are waiting for you… 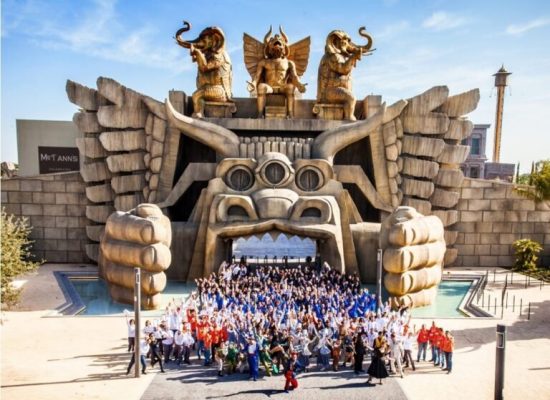