A blind woman switched personalities and regained her vision. 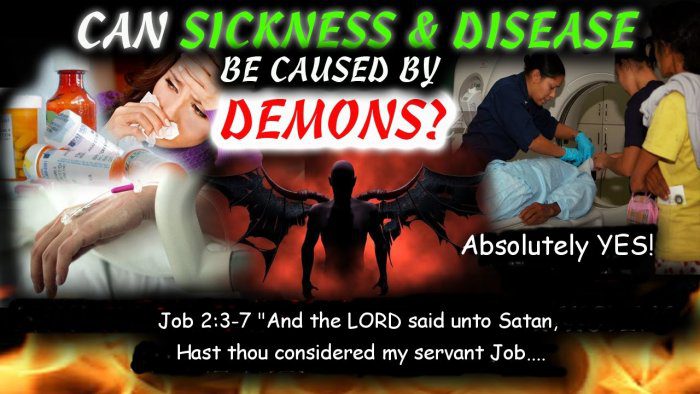 Job 2:3-7 “And the LORD said unto Satan, Hast thou considered my servant Job, that there is none like him in the earth, a perfect and an upright man, one that feareth God, and escheweth evil? and still he holdeth fast his integrity, although thou movedst me against him, to destroy him without cause. 4 And Satan answered the LORD, and said, Skin for skin, yea, all that a man hath will he give for his life. 5 But put forth thine hand now, and touch his bone and his flesh, and he will curse thee to thy face. 6 And the LORD said unto Satan, Behold, he is in thine hand; but save his life. 7 So went Satan forth from the presence of the LORD, and smote Job with sore boils from the sole of his foot unto his crown.”

News Flash: The enemy can cause disease, illness and mental ailments. In fact, the world would be amazed to learn how many ailments, setbacks, injuries and problems are caused by sin and/or demonic attack.

Quotes from the article at the Washington Post: (See the entire article there)

“After suffering a traumatic accident as a young woman, doctors diagnosed her with cortical blindness, caused by damage to the visual processing centers in her brain. Acquiescing to the diagnosis, she acquired a seeing-eye dog to be her guide and learned to adapt and accept the darkness.

The young lady (named B.T.) unfortunately, was also dealing many other more pressing health problems. Her most prominent issue was the fact that she had more than 10, wildly different personalities (Demons), competing for control of her body. It was during treatment for her dissociative identity disorder that the ability to see suddenly returned. B.T. (a 37 year old – German woman) was not the one who regained her vision. It was one of her alters, a teenage boy who sometimes took possession.

With therapy, over the course of months, all but two of B.T.’s identities regained their sight. And as B.T. oscillated between identities, her vision flicked on and off like a light switch in her mind. The world would appear, then go dark.

I tell you, anyone with the PROPER knowledge and anointing from God could cure this woman and set her free from her infirmities, in 5 minutes or less. How can I make such a bold statement? I have done it myself, by the authority and power of the name of Jesus Christ!

The fact that people have been set free from these things by the power of the name of Jesus Christ, should be proof that multiple personalities and other mental disorders are a result of Demon Possession. This should also serve as proof that disease and physical ailments are caused by demonic oppression and/or possession. People bring this on by their own actions, or God has allowed Satan to move on an individual.

Can demons or evil spirits or Satan himself cause physical disease or mental illness? The Bible says that Jesus and his Disciples cast demons out of people, so do demons still possess people today? Are diseases and illnesses like schizophrenia, epilepsy, bipolar disorder, Multiple Personality Disorder (MPD) a result of demon possession or severe demon oppression? Is sin and iniquity the cause of these infirmities?

We can glean from scripture that indeed Sin could be a cause. That can be one’s own sin, or sin that has been handed down from parents. If this was not the case, the disciples would not have raised that very question, in the following scripture.

John 9:1-3 “And as Jesus passed by, he saw a man which was blind from his birth.2 And his disciples asked him, saying, Master, who did sin, this man, or his parents, that he was born blind? 3 Jesus answered, Neither hath this man sinned, nor his parents: but that the works of God should be made manifest in him.

Is sickness caused by evil spirits?

Scripture indicates demonic activity and physical illness go hand in hand, in some cases, but not all. Some scripture clearly indicates sickness is caused by evil spirits. The Apostle Paul was also afflicted by Satan as well. Notice he attributes this to “a messenger of Satan” demon spirits!

2nd Corinthians 12:5-10 “Of such an one will I glory: yet of myself I will not glory, but in mine infirmities. 6 For though I would desire to glory, I shall not be a fool; for I will say the truth: but now I forbear, lest any man should think of me above that which he seeth me to be, or that he heareth of me. 7 And lest I should be exalted above measure through the abundance of the revelations, there was given to me a thorn in the flesh, the messenger of Satan to buffet me, lest I should be exalted above measure. 8 For this thing I besought the Lord thrice, that it might depart from me. 9 And he said unto me, My grace is sufficient for thee: for my strength is made perfect in weakness. Most gladly therefore will I rather glory in my infirmities, that the power of Christ may rest upon me.10 Therefore I take pleasure in infirmities, in reproaches, in necessities, in persecutions, in distresses for Christ’s sake: for when I am weak, then am I strong.”

Who else in Scripture was afflicted?

Luke 13:10-13 “And he was teaching in one of the synagogues on the sabbath.11 And, behold, there was a woman which had a spirit of infirmity eighteen years, and was bowed together, and could in no wise lift up herself.12 And when Jesus saw her, he called her to him, and said unto her, Woman, thou art loosed from thine infirmity.13 And he laid his hands on her: and immediately she was made straight, and glorified God.”

In their attempts to treat this woman, today’s Medical community would never even consider that the sickness could have a spiritual or demonic cause, because most of them have no sense or discernment. Luke tells us in his Gospel that Jesus healed all who he came in contact with that were oppressed by the devil.

Acts 10:38 “How God anointed Jesus of Nazareth with the Holy Ghost and with power: who went about doing good, and healing all that were oppressed of the devil; for God was with him.”

That is not to say that there are no doctors who are not anointed by God. In fact, some are gifted and dedicated. They are the ones who are often shunned and/or put out of business by the powers that be.

The woman in the article above is in the same condition as the woman in Luke 13, and those demons need to be cast out. The problem is she is under the oppression of humanistic psychology which frequently results in increased demonic involvement.

Most people, including the Church body, believe that those evil spirits, who caused illnesses in the first century, have taken a long vacation and are no longer around wreaking havoc. They don’t want to believe, because if they acknowledge their existence then they would be forced to deal with them. They know that they are not spiritually able to do so!

Luke 6:17-18 “And he came down with them, and stood in the plain, and the company of his disciples, and a great multitude of people out of all Judaea and Jerusalem, and from the sea coast of Tyre and Sidon, which came to hear him, and to be healed of their diseases; 18 And they that were vexed with unclean spirits: and they were healed.”

Matthew 10:1 “And when he had called unto him his twelve disciples, he gave them power against unclean spirits, to cast them out, and to heal all manner of sickness and all manner of disease.”

And then just a few verses later he tells them what to do.

Matthew 10:8 “And as ye go, preach, saying, The kingdom of heaven is at hand.8 Heal the sick, cleanse the lepers, raise the dead, cast out devils: freely ye have received, freely give.”

Here is a bible account that it reminiscent of something that I have experienced. The circumstances are not exactly the same, but very similar.

Mark 9:17-25 “And one of the multitude answered and said, Master, I have brought unto thee my son, which hath a dumb spirit;18 And wheresoever he taketh him, he teareth him: and he foameth, and gnasheth with his teeth, and pineth away: and I spake to thy disciples that they should cast him out; and they could not.19 He answereth him, and saith, O faithless generation, how long shall I be with you? how long shall I suffer you? bring him unto me.20 And they brought him unto him: and when he saw him, straightway the spirit tare him; and he fell on the ground, and wallowed foaming.21 And he asked his father, How long is it ago since this came unto him? And he said, Of a child.22 And ofttimes it hath cast him into the fire, and into the waters, to destroy him: but if thou canst do any thing, have compassion on us, and help us.23 Jesus said unto him, If thou canst believe, all things are possible to him that believeth.24 And straightway the father of the child cried out, and said with tears, Lord, I believe; help thou mine unbelief.25 When Jesus saw that the people came running together, he rebuked the foul spirit, saying unto him, Thou dumb and deaf spirit, I charge thee, come out of him, and enter no more into him.26 And the spirit cried, and rent him sore, and came out of him: and he was as one dead; insomuch that many said, He is dead.”

Jesus healed many who were sick and the Scriptures describe these healings very clearly. None of the following illnesses were attributed to demons: