Skip to content
Harry Potter  A new twist to Witchcraft 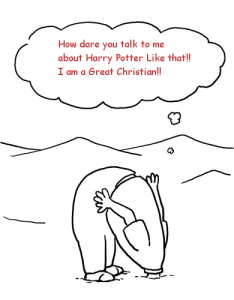 This page is for those who seek truth about the book series Harry Potter. Many think it is just harmless fantasy. True it is fantasy, but it is laced with witchcraft and demonology as are most books like it. Many say it gets children reading books who never would do so.

I give you this tid-bit to ponder on.

If your child did not like to take medicine and you had a chocolate drink with the medicine, plus arsenic in it, would you give it to them? You would if you did not know it was in there and what arsenic was. It is the same scenario with fantasy especially when it is laced with the poison of witchcraft

Matthew 13:9-16 “who hath ears to hear, let him hear. And the disciples came, and said unto him, Why speakest thou unto them in parables? He answered and said unto them, because it is given unto you to know the mysteries of the kingdom of heaven, but to them it is not given. For whosoever hath, to him shall be given, and he shall have more abundance: but whosoever hath not, from him shall be taken away even that he hath. Therefore speak I to them in parables: because they seeing see not; and hearing they hear not, neither do they understand. And in them is fulfilled the prophecy of Esaias, which saith, By hearing ye shall hear, and shall not understand; and seeing ye shall see, and shall not perceive: For this people’s heart is waxed gross, and their ears are dull of hearing, and their eyes they have closed; lest at any time they should see with their eyes and hear with their ears, and should understand with their heart, and should be converted, and I should heal them. But blessed are your eyes, for they see: and your ears, for they hear.”

1st Timothy 4:1-2 “Now the Spirit speaketh expressly, that in the latter times some shall depart from the faith, giving heed to seducing spirits, and doctrines of devils; Speaking lies in hypocrisy; having their conscience seared with a hot iron;

There are many books out about Witchcraft but none so cleverly packaged like the latest. Satan is up to his old tricks again and the main focus is the children of the world. The latest craze is a series of books by author J. K. Rowling, known as Harry Potter.
The scramble to get the books is not just for children. Just as many adults are amused and are absorbing the content of these books. And what is sickening, Christians, or so-called Christians, are part of the fan club. I knew nothing of Harry Potter until mail started coming in asking if it was OK for teachers in Christian schools to be reading children books about mythology and witchcraft!!!! Did you read that correctly? In Christian schools!!!!!
Are we now so far gone that the church can’t tell what Witchcraft is? Preachers are not doing what they are supposed to do. They are to expose this trash and inform the flock. But they join in the festivities and will not rock the boat. Halloween is accepted in the church and many of the so-called Christians fight hard when told they should not take part. Now just as Halloween is an abomination to God, so is writing books that glorify witchcraft or any kind of mythology.

The whole purpose of these books is to desensitize readers and introduce them to the occult. What a better way to introduce tolerance and acceptance of what God calls an abomination, then in children’s books? If you can get them when they are young, then you have them for life. It’s the oldest marketing scheme there is.

Who is Harry Potter?
Harry is a nobody, treated like dirt by the aunt and uncle who begrudgingly inherited him when his parents were killed. For the first 10 years of his life Harry sleeps in a cupboard under the stairs of his only living family who loathe him never realizing he’s special.

A mysterious letter, delivered by the friendly giant Hagrid, wrenches Harry from his dreary, Muggle hidden existence: “We are pleased to inform you that you have been accepted at Hogwarts School of Witchcraft and Wizardry Harry finds himself at Hogwarts surrounded by wizards, his snowy owl – Hedwig, a phoenix-feather wand, and jellybeans that come in every flavor, including strawberry, snot, grass, and sardine … and that’s where the real adventure–humorous, haunting, and suspenseful begins.

Note how the adults are depicted as hateful and perhaps strict. Then note how these wizards and other creatures are the good guys. These types of writings are nothing more then Satan’s way to undermine the family. Kids get these books and then live in a fantasy world and rebel against there parents. Here is a quote from the author:

“The idea that we could have a child who escapes from the confines of the adult world and goes somewhere where he has power, both literally and metaphorically, really appealed to me.”

Note what she says about the child having power? What she is saying is that the child needs to have power and control over parents and also to have the power of the occult. The author also uses occult terms in her thinking. Look at this new age phrase. “I have a very visual imagination. I see it, then I try to describe what is in my mind’s eye,” This minds eye concept is the heart of the new age movement.

It is the ability to escape ones confines of this world and to explore the other dimensions of existence. For more info on the new age movement, check out this site. New Age

Keep these books and their teachings from your child. It is supposed to be a 7 book series, which 3 have already been published. I will add more info about the author and the books as it comes to my attention. Some teachers are reading these books to their classes.

They are pagans using the school system to spread their agenda. Your tax dollars are being used to promote Witchcraft and no one is coming against it. Now read a bible or mention Jesus in school and your locked up. Pagans state that theirs is a bona-fide religion with the same rights as Christianity. So why are they allowed to teach it in the schools?

The demon possessed author of Harry Potter is afraid and “intimidated” because of prayer.

“I had no idea the phrase, ‘I’m praying for you,’ could sound so intimidating,” Rowling said.

Its not really her that is afraid, it’s those demons.

James 2:19 “Thou believest that there is one God; thou doest well: the devils also believe, and tremble.”

They are afraid of being cast out of a willing host!

“My critics are at liberty to claim that I am trying to convert children to Satanism. And I’m free to explain that I’m exploring human nature and morality — or to say you’re an idiot, depending on which side of the bed I got out of that day.”