For more detailed information on Witch Hillary, see the 11 part series Hillary Clinton’s Witchcraft that proves she is a practicing Witch. 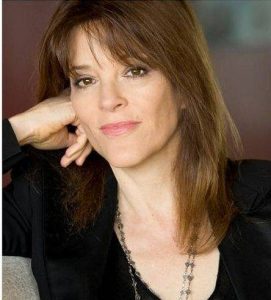 How did Marianne Williamson, the author of 21 Spiritual Lessons for Surrendering Your Weight Forever, and other stuff you might see on the bottom layer of a garage sale, end up on the 2020 debate stage?

The obvious answer is that she’s been there for a very long time.

Lefties love to claim that they’re the movement that believes in science. But the Third Law of Thermodynamics isn’t something you believe in. Fermat’s Principle doesn’t give your life meaning.

Marianne teaching you spiritual lessons about weight loss on an episode of Oprah does. 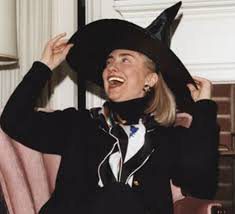 Hillary Clinton held a séance in the White House. The séance overseen by Jean Houston, the author of The Hero and the Goddess: The Odyssey as Pathway to Personal Transformation, encouraged Hillary to contact Eleanor Roosevelt. Hillary and Houston hit it off after the Clintons invited self-help book authors to Camp David to help them cope with their defeat. The authors included Marianne Williamson.

Marianne Williamson had reportedly participated in some of Hillary’s White House seances.

Esquire claimed that Hillary Clinton had met her at a fundraiser where the New Age guru made such an impression that she was invited to stay in the Lincoln Bedroom.

Where did Marianne Williamson come from? The White House and the Democrat Party.

Unlike Andrew Yang, Williamson isn’t a fringe character who somehow made it into the debate stage. When she ran for Congress, her backers included Dennis Kucinich, who told supporters, “You are the ones who are calling forward a reality by the name of Marianne Williamson”, and Jennifer Granholm, the former Governor of Michigan, who headed a key Hillary SuperPAC.

Williamson is a crackpot, but her crackpottery fills the broken china closets of the Democrats. She got this far because the upper echelons of the Dems don’t believe in God, but do believe in crazy.

When Hillary Clinton wasn’t trying to commune with Eleanor and Gandhi, she appeared to share the obsession of John Podesta, her campaign chair, with UFOs. There was bafflement when former Senator Majority Leader Harry Reid was caught earmarking $22 million to study UFOs. Earlier this year, Reid claimed that there was a UFO race between Russia’s KGB (which no longer exists), China and America.

$10 million went to a Dem donor interested in UFOs who had written Harry $10,000 worth of checks.

The UFO research quickly took a dive into the paranormal, which, according to a senior manager included studying, “bizarre creatures, poltergeist activity, invisible entities.” The reports were subcontracted to a research team led by a psychic espionage researcher.

Compare that to President Trump being briefed on UFOs and dismissing them.

Remind me again which party “believes” in science?

Democrats were twice as likely as Republicans to think that astrology is “very scientific”. And the Democrats split equally down on the middle on whether astrology was or wasn’t scientific.

Liberals were more likely to believe in astrology than conservatives. 43% of liberals believed that astrology was scientific, while only 26% of conservatives did. Only 48.6% of Democrats, compared to 62% of Republicans, were able to correctly answer that the earth revolves around the sun.

That’s why Marianne Williamson is up there on the debate stage. The only surprise is that it took this long for an unabashed representative of what the Democrats really believe to finally show up.

70% of Republicans believe in the God of the bible. Only 45% of Democrats do. 39% believe in some other power or spiritual force. 14% don’t believe in any kind of higher power.

47% of white Democrats say that religion isn’t really important in their lives. What do they believe in?

Spirituality. Auras. Energy forces. Karma. Battling dark psychic forces. Being attuned to the universe. They believe in, among other things, the founder of the Church of Today who lived in a commune, worked as a cabaret singer, ran a New Age bookstore, and became a fave of Oprah and Hillary Clinton.

“One sometimes gets the impression that the mere words ‘Socialism’ and ‘Communism’ draw towards them with magnetic force every fruit-juice drinker, nudist, sandal-wearer, sex-maniac, Quaker, ‘Nature Cure’ quack, pacifist, and feminist in England,” George Orwell wrote.

But do lefty politics draw in nuts and kooks for no apparent reason? Or is the insanity baked inside?

Are Marianne Williamson’s crazy rants about dark psychic forces and force fields unrelated to her politics, or is the socialist conviction that the world needs careful management by the enlightened to cure us of our human nature exactly the sort of political philosophy that attracts quacks and kooks?

Behind the façade of reason, the light side of the Left, with its plans for a totalitarian utopia of resource management, speech policing, constant reeducation, and disposition of the unworthy, is a dark side of festering demons, spirits, ghosts, sorcerous powers, and invisible visitors from other realms. The light side claims that its ideas are the product of science, experts and modern thought, but the dark side is throbbing with magical thinking, hysterical outbursts, senseless cruelty, and cults of personality.

People don’t believe in what speaks to their conscious, but their unconscious.

The Left likes to claim that its plans come out of the light side, but history shows they originate in the dark. That’s why all the scientific plans never work out the way that they are meant to. The revolutions devolve into blood rituals. The economic plans fall into corruption and chaos. And when it’s done, masses of brutalized people wander in the shadows and wonder how all this could have happened.

The answer is that leftist politics only pretend to come from the conscious mind, but actually originate in the resentments, fantasies and terrors of the unconscious mind. Leftism isn’t reasoned, it’s rationalized.

Its politics are the wishes and the vendettas of the subconscious filtered through pseudo-science.

Marianne Williamson is unremarkable. After Trump’s election, tens of thousands of women like her swarmed the streets wearing pink hats to shriek at the sky and repel the dark psychic forces. This caucus of crazy white women, who underlie the leftist activist base, are spiritual rather than religious. They believe that they have special insight and are much too smart for organized religion. They are convinced that women are more spiritually attuned than men, that progressives are more sensitive than everyone else, and that they project spiritual forces through their activism that will change the country.

They believe in everything, ghosts, auras, energy forces, UFOs, and even angels, but no God.

That would be blasphemous because what they believe in, above all else, is themselves.

Marianne Williamson, like Obama and Oprah, speak to their inner specialness, to their egos and their conviction that they were put on earth to change the world and feel good about themselves. They assure them that all their inner conflicts can be resolved by directing their energy into politics and that they will be assured of immortality if their political activism puts them on the right side of history.

They are their own goddesses, their religion is narcissism, and the church is leftist politics.

Hillary Clinton, despite being one of them, never actually managed to speak to them. That’s one of the reasons why she lost. Even aside from Marianne Williamson, the 2020 field is full of Democrats trying out the rising cadences and long pauses of fake spirituality and impassioned vagueness. They use the borrowed poetry of religion to convey faith, but the only thing they believe in is themselves.

Williamson will lose this race. Just as she lost the race to represent Beverly Hills in Congress. But eventually, the unofficial religion of the Democrat Party will get a guru as President of the United States.

Courtesy of The Washington Standard