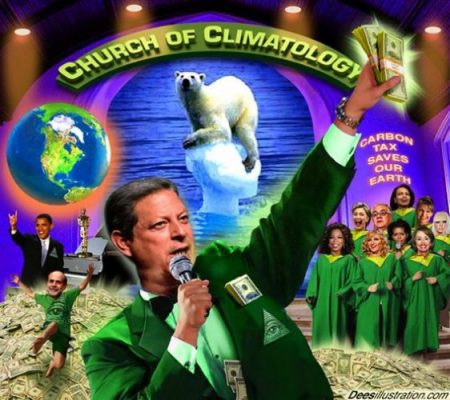 Johan Rockstrom, former director of the Potsdam Institute of Climate Change Impact Research, said: ‘To have any chance of feeding ten billion people in 2050 within planetary boundaries, we must adopt a healthy, plant-based diet, cut food waste, and invest in technologies that reduce environmental impacts.’  The ‘great food transformation’ proposed in the report is at odds with other schemes that aim to tackle greenhouse gas emissions.

The world must turn to vegetarianism with plant-based diets to stop climate change, a United Nations report has warned

Geoffrey Grider | NTEB – Climate Change and worship of the Earth as the ‘mother goddess‘ is quite popular in our day. The New Agers who practice this ancient pagan religion call it Gaia, but they are not the only ones. Earth worship is a favorite ‘sermon topic’ for Pope Francis in Rome, for all major universities and colleges here in America, and for the demonically-powered United Nations in New York City.

“Professing themselves to be wise, they became fools, And changed the glory of the uncorruptible God into an image made like to corruptible man, and to birds, and fourfooted beasts, and creeping things. Who changed the truth of God into a lie, and worshipped and served the creature more than the Creator, who is blessed for ever. Amen.” Romans 1:22,23,25 (KJV)

After the born again Church of Jesus Christ leaves in the Pretribulation Rapture, Gaia worship combined with Roman Catholicism will form the basis for the ungodly and ecumenical One World Religion of Antichrist. The United Nations is just giving us a ‘sneak preview’ of coming events. The first video at the bottom of this article declares the Bible to be a fraud in the first 5 minutes as it attacks both Testaments, Christianity and coming prophetical events. Our Enemy is quite crafty and cunning, no doubt, but he always reveals his hand if you are paying close enough attention to see it.

FROM THE DAILY MAIL UK: Our food system accounts for between 25 and 30 percent of greenhouse gases, and is choking the life from fresh and coastal waterways with excess nitrogen. In order to feed the predicted 9.8 billion people on Earth in 2050, the world will need to produce 56 per cent more food compared to 2010.

If the level of meat and dairy consumption rises in line with current food habits, six million square kilometres (2.3 million square miles) of forests would need to be converted to agriculture – an area twice the size of India.

Johan Rockstrom, former director of the Potsdam Institute of Climate Change Impact Research, said: ‘To have any chance of feeding ten billion people in 2050 within planetary boundaries, we must adopt a healthy, plant-based diet, cut food waste, and invest in technologies that reduce environmental impacts.’

The ‘great food transformation’ proposed in the report is at odds with other schemes that aim to tackle greenhouse gas emissions.

One report by the UN’s Intergovernmental Panel on Climate Change (IPCC) proposes to convert areas the size of India to biofuel crops or CO2-absorbing trees.

Nearly all Paris-compatible climate models slot in a major role for a two-step process that draws down carbon by growing biofuels, and then captures CO2 released when the plants are burned to generate energy.

The Real Climate Change Is Coming

YES, OUR GLOBAL CLIMATE IS CHANGING RAPIDLY, AND NO, THERE IS NOTHING YOU CAN DO ABOUT IT AND THERE IS NO POWER ON EARTH THAT CAN STOP IT

The amount of ‘bioenergy with carbon capture and storage’, or BECCS, required in coming decades will depend on how quickly we sideline fossil fuels and shrink our carbon footprints.

But these proposals ‘could compromise sustainable development with increased risks – and potentially irreversible consequences – for food security, desertification and land degradation,’ a draft summary of the 1,000-page IPCC report warns.

At this pace, humanity will exhaust its ‘carbon budget’ for a 1.5C world before US congresswoman Alexandria Ocasio-Cortez, co-sponsor of the Green New Deal, turns 45 in 16 years. READ MORE

GAIA · The Big Mother is a 48′ documentary about the origin, evolution and future of the Earth, focusing on the geological concepts and the role of life and humans. Facts and ideas are shown through illustrations and animations together with films made on places like museums and relevant landscapes. The threats to the sustainability of our planet are also exposed.
NOTE: This video takes aim at the Holy Bible and God’s prophetical revelation and gets rid of it within the first 4 minutes and 20 seconds.

Pope Francis Wants You To Love Your Mother Goddess

The Roman Catholic religion is based on, not Jesus Christ, but on the worship of the ‘Virgin Mary‘ who they say is the ‘conduit’ whereby all ‘grace and blessings‘ are imparted to the believer. Pagan nonsense, of course, but this is why the Roman pope is always preaching on Climate Change because the RCC and mother goddess worship are two peas in a pod.