Supposed Christian Michael Gungor Rejects Genesis as Literal and says Jesus Could Have Been Wrong About Adam, Noah.

Gungor Controversy Continues as Singer States Jesus Could Have Been Wrong About Adam, Noah 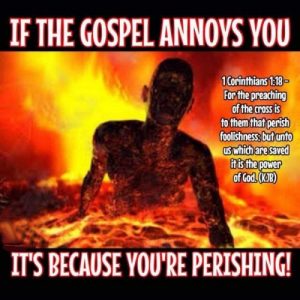 This is just another Heretic revealing what is really in his heart.

Matthew 12:33-37 “Either make the tree good, and his fruit good; or else make the tree corrupt, and his fruit corrupt: for the tree is known by his fruit. O generation of vipers, how can ye, being evil, speak good things? for out of the abundance of the heart the mouth speaketh. A good man out of the good treasure of the heart bringeth forth good things: and an evil man out of the evil treasure bringeth forth evil things. But I say unto you, That every idle word that men shall speak, they shall give account thereof in the day of judgment. For by thy words thou shalt be justified, and by thy words thou shalt be condemned.”

I have never heard of Michael Gungor because I do not follow or listen to music that is NOT inspired and anointed by the Holy Spirit. That, and the fact that the apostate mega fools are the ones who promote and support such.

I took time to go and listen to some of what they believe is inspirational music. Nope sorry, just more satanic inspired gibberish that does not lift up Jesus Christ and nothing pointing people to the Living God. If that upsets you then you need to rethink your walk with God and ask the Holy Spirit to show you what real anointed music is!!

Perhaps it is akin to secular music because in his belief, he is a Christian in name only, he is just like the hussy Katy Perry, Miley Cyrus, and others who have given heed to seducing spirits and doctrines of demons.

1st Timothy 4:1 Now the Spirit speaketh expressly, that in the latter times some shall depart from the faith, giving heed to seducing spirits, and doctrines of devils;

Some Quotes out of the articles

“I guess I’ll have to come out of the closet and admit… I don’t believe in a literal six-day creation,” he wrote. “Genesis is a poem if I’ve ever seen one.”

“I have no more ability to believe, for example, that the first people on earth were a couple named Adam and Eve that lived 6,000 years ago,” he wrote. “I have no ability to believe that there was a flood that covered all the highest mountains of the world only 4,000 years ago and that all of the animal species that exist today are here because they were carried on an ark and then somehow walked or flew all around the world from a mountain in the middle east after the water dried up.”

He is stating that he has been given over to a reprobate mind by saying “I have no more ability to believe” Now for those of you who will not go look it up or those who use a corrupt version of the Bible, here is the Scripture out of the KJV

Romans 1:21-32 “Because that, when they knew God, they glorified him not as God, neither were thankful; but became vain in their imaginations, and their foolish heart was darkened. Professing themselves to be wise, they became fools, And changed the glory of the uncorruptible God into an image made like to corruptible man, and to birds, and fourfooted beasts, and creeping things. Wherefore God also gave them up to uncleanness through the lusts of their own hearts, to dishonour their own bodies between themselves: Who changed the truth of God into a lie, and worshipped and served the creature more than the Creator, who is blessed for ever. Amen. For this cause God gave them up unto vile affections: for even their women did change the natural use into that which is against nature: And likewise also the men, leaving the natural use of the woman, burned in their lust one toward another; men with men working that which is unseemly, and receiving in themselves that recompense of their error which was meet. And even as they did not like to retain God in their knowledge, God gave them over to a reprobate mind, to do those things which are not convenient; Being filled with all unrighteousness, fornication, wickedness, covetousness, maliciousness; full of envy, murder, debate, deceit, malignity; whisperers, Backbiters, haters of God, despiteful, proud, boasters, inventors of evil things, disobedient to parents, Without understanding, covenantbreakers, without natural affection, implacable, unmerciful: Who knowing the judgment of God, that they which commit such things are worthy of death, not only do the same, but have pleasure in them that do them.”

Just like the foolish remarks made by Victoria Osteen, Michael Gungor has no idea who God is. I would assume he has been brought up under the teachings of false teachers such as the Osteen’s, Warren’s, Copeland’s, Meyer’s and other disciples of satan. One thing is for sure that millions listen to this fool and will be led straight to the pit of hell!!