Necrophilia is a pathological fascination with dead bodies, which often takes the form of a desire to engage with them in sexual activities, such as intercourse. Though prohibited by the laws of many countries, there have been many reported cases of necrophilia throughout history. Source 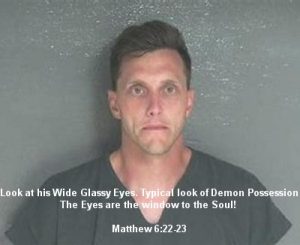 Investigators pointed to DNA evidence and the suspect’s online search history as evidence for the murder charge against Colby Martin. Martin, 29, of White Pigeon, was arraigned on open murder connected to the death of Melody Rohrer in Van Buren County District Court Wednesday. Prosecutors initially charged Martin with manslaughter with an automobile, failure to stop at the scene of a crash, and concealing a body in September 2021.

In September, authorities alleged he struck the 64-year-old woman when she was jogging through Hamilton Township and that he moved the body to St. Joseph County.
At the time, prosecutors described the alleged crimes as “egregious,” according to WWMT.

“The defendant’s conduct is that of a person who shows absolutely no remorse, it shows that he is a great danger, is very dangerous,” Van Buren County Assistant Prosecuting Attorney Jay Blair commented. “He presents a very high and great danger to the public.”

The suspect’s cellphone search history reportedly revealed he looked for pornography involving “dead or unconscious women” once the victim was reported to be missing.

“Detectives also said Martin and Rohrer’s DNA were linked to condoms recovered in Martin’s vehicle and a trashcan near his home,” the WWMT report stated.
Martin was charged this week with open murder and denied bond, according to Fox 17. See more here

Looking at the arrest picture of  Colby Martin, he has the classic look of a person who has a demon that is manifesting. As the above scripture says, you can tell the state of a person just by looking at their eyes.

That is why most will NOT look you directly in the eye. The devil knows he will be found out!

Take a look at the other killers who have that same look.

What’s Inside of YOU? The Eyes are the Window to the Soul