Revelation 1:7 “Behold, he cometh with clouds; and every eye shall see him, and they also which pierced him: and all kindreds of the earth shall wail because of him. Even so, Amen.” 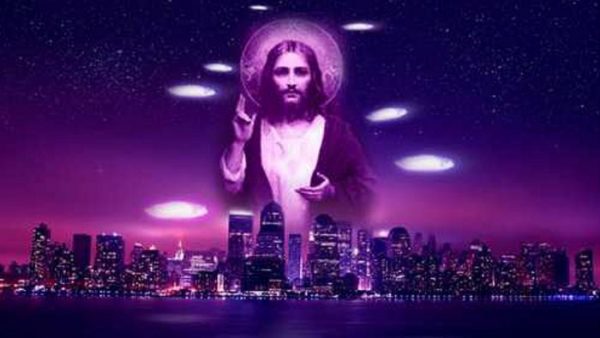 Ever wonder how the anti-Christ will fool the masses into believing that he is all powerful and is god? Well, the technology is here and it won’t be long before the deception begins!

Matthew 24:23-26 “Then if any man shall say unto you, Lo, here is Christ, or there; believe it not. 24 For there shall arise false Christs, and false prophets, and shall shew great signs and wonders; insomuch that, if it were possible, they shall deceive the very elect. 25 Behold, I have told you before. 26 Wherefore if they shall say unto you, Behold, he is in the desert; go not forth: behold, he is in the secret chambers; believe it not.”

Don’t be deceived people! “Fool me once, shame on you. Fool me twice, shame on me.” Only problem is, if you fall for it the FIRST TIME, there is NO “fool me Twice”!!!

If you are part of the “elect”, meaning that you are Born Again and the Holy Spirit leads and guides you, you will have discernment and will know what is FALSE! All others will be like lemmings and fall for the deception!

Pepsi says it’ll use an artificial constellation, hung in the night sky next to the stars, to promote an energy drink.

A Russian company called StartRocket says it’s going to launch a cluster of cubesats into space that will act as an “orbital billboard,” projecting enormous advertisements into the night sky like artificial constellations. And its first client, it says, will be PepsiCo — which will use the system to promote a “campaign against stereotypes and unjustified prejudices against gamers” on behalf of an energy drink called Adrenaline Rush.

Yeah, the project sounds like an elaborate prank. But Russian PepsiCo spokesperson Olga Mangova confirmed to Futurism that the collaboration is real.

“We believe in StartRocket potential,” she wrote in an email. “Orbital billboards are the revolution on the market of communications. That’s why on behalf of Adrenaline Rush — PepsiCo Russia energy non-alcoholic drink, which is brand innovator, and supports everything new, and non-standard — we agreed on this partnership.”

Futurism first reported on StartRocket back in January, when the company announced plans to project huge ads into the night sky using cubesats with Mylar sails that’ll reflect sunlight back down to Earth during the twilight of early morning or evening.

“We are ruled by brands and events,” project leader Vlad Sitnikov told Futurism at the time. “The Super Bowl, Coca Cola, Brexit, the Olympics, Mercedes, FIFA, Supreme and the Mexican wall. The economy is the blood system of society. Entertainment and advertising are at its heart.”

The idea prompted strong backlash among Futurism readers, who objected to the idea of invading the nighttime sky with ads.

“This startup made an AI read every dystopian fiction novel and is turning its cursed ramblings into business plans,” wrote one. Another said that “shooting down those ads should be legal.”

Researchers were also concerned by the idea.

Now, StartRocket claims to have tested the technology with a helium balloon that launched one of its reflectors into the stratosphere — where it was visible from the ground.

“An hour and a half after the launch we concluded that the test was successful,” Sitnikov said.

StartRocket plans to launch the system into orbit in 2021. It’s currently raising funds, it says — and a $20,000 investment will buy eight hours of advertising in the night sky.  Read more here

What is the Blue Beam Project?

It involves two things. A technologically simulated “second coming” and the reemergence of new “MONTAUK” type projects that have the ability to take up a whole bunch of people as in a “rapture” type of situation and whisk the whole bunch into never-never land.

Ironically, portions of the holographic projections have the potential for changing the planet into oneness with God. Unfortunately, this operates on the premise that Man shall somehow become God in human form and control other Men and dictate all actions and thoughts.

The calculated resistance to the new religion, the New World Order and the new “Messiah” will entail human loss on a massive scale in the ensuing “holy wars”. The “BLUE BEAM PROJECT” will pretend to be the universal fulfillment of the prophecies of old; as major an event as that which took place 2000 years ago. In principle, it will make use of the sky as a holographic projection screen for space-based laser-generating satellites (star wars). These projectors will project simultaneous images to the four corners of the planet, in every language by region.

It deals with the religious aspect of the NEW WORLD ORDER.

The “system” has already been tested. Holographic projections of the “CHRIST IMAGE” have already been seen in some remote desert areas. These have only been reported in tabloid papers, so they are instantly rendered moot. They can also project images of alien craft, aliens, monsters, angels – you name it. Computers will coordinate the satellites and software will run the show-and-tell.

Holography is based on very nearly identical signals combining to produce and image, or hologram, with depth perception. This is equally applicable to acoustic (ELF, VLF, LF) waves as it is to optical phenomena.

Specifically, the “show” will consist of laser projections of multiple holographic images to different parts of the planet, each receiving different images according to the predominating regional religious faith. Not a single area will be excluded. With computer animation and sound effects appearing to come from the depths of space, astonished followers of the various creeds will witness their own returned Messiah in spectacularly convincing lifelike realness.

The various images of Christ, Mohammed, Buddha, Krishna, etc., will merge into ONE after “correct explanation” of the mysteries, prophecies and revelations are disclosed. This “ONE GOD” will in fact function as the “Anti-Christ”, who will “explain” that the various scriptures “have been misunderstood”- that the religious of old are responsible for turning brother against brother, nation against nation – that the religions of the world must be abolished to make way for the GOLDEN AGE (NEW AGE) of the One World Religion, representing the One God they see before them.

Naturally, this superbly staged, full-scale production will result in social and religious disorder on a massive scale. Wonder what the television transmitters of religious networks will be doing on that day ?

But before all this, they have to go through four different steps in order to get to Project Blue Beam. 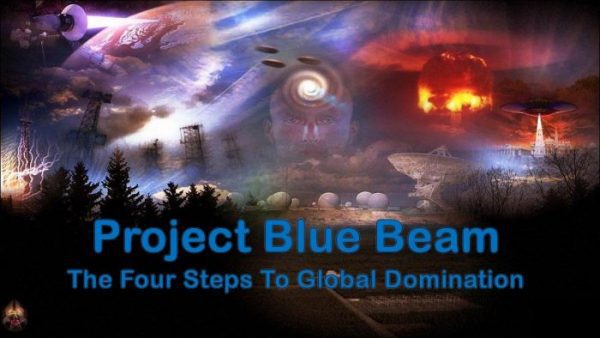 1: The first step concerns the breakdown of all archeological knowledge It deals with staging earthquakes at certain precise locations around the planet where supposed new “discoveries” will finally explain (for them) that the meanings of the basic doctrines of all the world’s major religions are “wrong.” This falsification will be used to make the population believe that all religious doctrine has been misunderstood and misinterpreted. The falsification started with the film 2001: A Space Odyssey, the TV-series STAR TREK, the STAR WARS films, E.T., all of which deal with space “invasion” and “protection”. JURASSIC PARK, was to push the theory of evolution.

2: The second step deals with the gigantic space show 3D optical holograms and sounds, laser projections of multiple holographic images in different parts of the world, each receiving a different image, according to its predetermined original national religious faith. This new “god” image will talk in all languages. As an example, the Soviets (actual Russians) have manufactured the advanced computers and have programmed them with the minute psychological particles based upon their studies of the anatomy and biology of the human body, as well as their studies on the anatomy, chemistry and electricity of the human brain. These computers have also been fed with the different languages of the world.

3: The third step deals with telepathic electronic two-way communication ELF (Extra Low Frequency), VLF (Very Low Frequency), and LF (Low Frequency) waves will reach the people of the earth through the insides of their brains, making each person believe that his own God is speaking to him from within his own soul. Such rays, from satellite, are fed from the memory of computers that store much data about the human being and his languages. These rays will then interlace and interweave with the natural thinking processes to form what we call the ARTIFICIAL TALK.

The first one is to make mankind believe that an alien invasion is about to occur upon every major city on the earth. This is to push each major nation into using its nuclear capability to strike back. In this manner, it would put each of these nations in a state of full disarmament before the United Nations after the false attack.

The second is to make the “christian” believe that a major rapture is occurring, with a simple “played” divine intervention of an alleged “good” alien force coming to save the good people from a brutal satanic attack. Its goal is to get rid of all significant opposition to the NEW WORLD ORDER.

The third orientation is a mixture of electronic and supernatural forces. The waves (frequencies) used at that time will allow supernatural forces to travel through fiber optics cable, coaxial cable, electric and telephone lines in order to penetrate all electronic equipment and appliances that will by then all have a special microchip installed.

The goal of this step deals with the materialization of satanic ghosts, specters, and poltergeists all across the globe in order to push all populations to the edge of a wave of suicide, killing and permanent psychological disorder.

After that night of the THOUSAND STARS, HUMANITY IS BELIEVED TO BE READY FOR THEM TO ENTER IN A “NEW MESSIAH” TO REESTABLISH PEACE EVERYWHERE AT ANY COST, EVEN AT THE COST OF FREEDOM.