The Deep State Is Free to Prey Upon Your Children. They are the very ones who are protesting and fighting so hard against the President. They know their time is VERY SHORT.

Revelation 12:12 “Therefore rejoice, ye heavens, and ye that dwell in them. Woe to the inhabiters of the earth and of the sea! for the devil is come down unto you, having great wrath, because he knoweth that he hath but a short time.”

From The New American:

“The United Nations “Human Rights Council,” which counts some of the world’s most ruthless dictatorships as members, sparked global outrage last week by voting to appoint a UN czar to oversee the normalization of homosexuality and transgenderism around the world.

…According to the UN’s propaganda service, the discredited UN “Human Rights Council” debated the measure for almost four hours on June 30 before adopting the scheme in a contentious vote. Just 23 member governments and regimes voted in favor of creating the new czar, while 18 voted against and six abstained. The measure was pushed forward by a tight-knit network of communist and socialist governments in Latin America with close ties to Marxist terrorist groups, Western globalists, Moscow, and Beijing. A number of European governments and other members of the “ LGBT Core Group,” which includes Obama and the EU, also played a key role in pushing the scheme from outside the UN “human rights” outfit.“For the first time, work on this issue [normalizing homosexuality and transgenderism] will be effectively institutionalized at the Human Rights Council,” the UN said….”

…”celebrated as a “great step forward for human rights in the United States.” “The measures he advocated here — including new laws to protect people from discrimination — are the same measures that, today, we advocate to governments everywhere.” Ironically, the praise for the child rapist came even as the UN’s “peace” armies were facing global outrage for systematically raping and sexually exploiting children around the world.

Years ago, I wrote about the fact that NAMBLA was advocating for the legalization of pedophilia.  Care to guess who their largest contributor is?  Look at the following:

The following is an example of how academics talk about pedophilia. Soon, the practice, much like transgenders terrorizing girls in female restrooms has become the norm.

“Paedophilic interest is natural and normal for human males,” said the presentation. “At least a sizeable minority of normal males would like to have sex with children … Normal males are aroused by children.”

Some yellowing tract from the Seventies or early Eighties, era of abusive celebrities and the infamous PIE, the Paedophile Information Exchange? No. Anonymous commenters on some underground website? No again.

The statement that paedophilia is “natural and normal” was made not three decades ago but last July. It was made not in private but as one of the central claims of an academic presentation delivered, at the invitation of the organisers, to many of the key experts in the field at a conference held by the University of Cambridge.

Other presentations included “Liberating the paedophile: a discursive analysis,” and “Danger and difference: the stakes of hebephilia.”

Hebephilia is the sexual preference for children in early puberty, typically 11 to 14-year-olds. 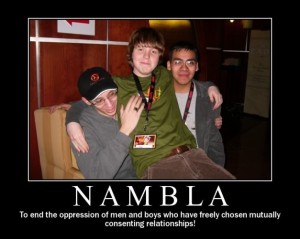 The most heinous organization in America is Nambla. Nambla is short for the North American Man-Boy Association and their identifying banner statement is “sex before 8 or it is too late”.

We are on our way in the country to allowing and even encouraging sex with children. The last taboo is being eliminated.

It is now tolerated that creatures with an XY chromosome structure can now enter little girls restrooms, under the guise of being a transgender and terrorize these girls George Soros style.  Your childre are about to become part of a world that they are not equipped to live in.

How long will it be until employees who have sex with children is protected as well when we look at the transgender issue in bathrooms. No, this is not hyperbole, it is a legitimate concern. The North American Man-Boy Love Association (NAMBLA) begins to figure prominently into this picture. In the past, one of their trademark phrases was “sex before eight, or it’s too late”. This is an obvious attempt to remove the last perverted prohibition from our legal code as well as our societal safeguards to protect our children. Words cannot describe how sick and perverted these people truly are. And before you think that this could never become a reality, please consider that globalist, George Soros, gives money to NAMBLA. If that is not concerning enough for you please realize that Kevin Jennings, an Obama Department of Education official, and a close friend of Hillary Clinton has involvement with this group as well.

“Could the last taboo be permanently removed? You mean I no longer have to hide the fact that I am a pedophile?

Bootstrapping gender neutral and homosexual protection issues to pedophilia is already happening. The New York Times is on record saying the pedophilia is not a crime. The ACLU is actively defending Nambla and pedophile advocates.

YOUR CHILDREN AT RISK- THE NORMALIZATION OF PEDOPHILIA

Posted with permission from Dave Hodges The Common Sense Show.