Sounds like this man hating craze that is currently happening does it not?

There are no such things as Ghosts. What she is having Sex with is MULTIPLE Demons. See this article that will explain what they REALLY ARE!

Ending Clip from the movie Ghost. It ain’t like this folks and it ain’t Casper the friendly ghost either! If you believe this crap, You are deceived!

New Zealand Herald – A woman who says she has sex with ghosts has declared she will “never go back to men” – because spirits leave her more satisfied.

Amethyst Realm, a Spiritual Guidance Counselor (she is a New Age WITCH) from Bristol, claims to have had sexual encounters with 20 different ghostly lovers, (Demons, and that technically makes her a Whore!) and that they give her orgasms.

“It was kind of like a weight, I felt a pressure on my thighs. At the same time physical breath, and stroking,” “I think it was in love with me too and it wanted me to end the relationship,”

She says she’s now turned her back on men altogether and hopes to find her one true ghoul to settle down with. Source

Here is the Interview

She isn’t the first and most assuredly will not be the last!

Realm isn’t the first person to claim to have gotten down with a ghost. Singers Bobby Brown and Kesha also say they’ve had supernatural sex sessions

“I should imagine you have got quite a name for yourself in the spirit world,” he said. “I would imagine they would be keen to visit you.”

Now Realm wants to get pregnant by one of the ghosts.

“I’ve done a bit of research into phantom pregnancies,” she said. ”There’s a possibility that it is a ghost in you, but people don’t know how to carry it to full term. Source: Huffington Post

That is because it has already been accomplished in the Black Magic Ritual Babalon working, resulting in the birth of Hillary Clinton! Also see SABOTEURS PART 10: High Strangeness, Hilarion, And The Babalon Working

Sex with Demons happens every day some where in the world. It is a direct result of rejection of the Word of God and HIS protection from Demonic forces. I can attest to the fact that it is very real. I my younger days when I was a heathen, not being Born Again, I was visited by the female demon Succubus. It is exactly as this and other people have experienced!

According to the news she is a Spiritual Guidance Counselor which is a politically correct term for someone in the New Age Movement and  Witchcraft, meaning she is a bonafide Witch.

So what is she in contact with and having sex with? Demons! A Male Incubus or a perhaps since she hates men, a Female Succubus!

An incubus is a Lilin-demon in male form who, according to mythological and legendary traditions, lies upon sleeping women in order to engage in sexual activity with them. Its female counterpart is a succubus. Salacious tales of incubi and succubi have been told for many centuries in traditional societies. Some traditions hold that repeated sexual activity with an incubus or succubus may result in the deterioration of health, mental state, or even death! Source: Wikipedia

You can also see many other demon names here.

She is being fooled like some many other in similar situations who are into the Occult and practice Witchcraft. People are going to these Psychics trying to contact and be able to see or hear dead loved ones. Some are supposedly having them come to, or speak to them in a dream. NOT! They are Masquerading demons that drag Biblically ignorant people in to the paranormal and straight to Hell.

Read this account of a worker and myself. What does the Bible say about ghosts and Hauntings?

More about these Sexual Demons. What is a succubus and incubus?

Got Questions – According to medieval folklore, a succubus is a demon that takes the form of a woman in order to have intercourse with a man in his dreams. The name comes from Old Latin, and means “to lie under.” In Islamic superstition, there is a similar demon called the qarinah or karina, and in ancient Middle Eastern cultures Lilith was the night demon’s name. Whichever name is used, the essential qualities are the same: a demon who tempts men sexually at night and who tries to kill infants at birth.

There are two biblical passages that may refer directly to this kind of demon. One of the Dead Sea Scrolls (4Q184) depicts a being called “the seductress” who has horns and wings and a multitude of sins in her wings. This being tempts men into sin and ultimately drags them into the Pit. The passage is quite similar to Proverbs 2:18-19, which describes the dangers of the seductress or “strange woman.” In describing the results of God’s judgment on Edom, Isaiah 34:14 (KJV) says, “the screech owl also shall rest there, and find for herself a place of rest.” The American Standard Version translates “lilith” as night demon or monster, and the Revised Standard Version uses the name “Lilith.” Some commentators have proposed that primitive cultures heard the cries of nocturnal animals and attributed them to demons because they had no knowledge of those animals.

Are succubi real? If we grant any credence to the widespread beliefs of ancient cultures, the answer would have to be yes. If we confine our search to biblical writing, the answer becomes more difficult. To be sure, the name has been associated with a demonic presence for several thousand years and fits in that context in the Bible. It is also certain that the Bible deals with demons as very real, very powerful beings which have dealings with mankind. Second Peter 2:4 speaks of angels who sinned and were cast down to hell in judgment. Jude 6 (KJV) likewise speaks of angels who “kept not their first estate,” and are awaiting the last judgment. Jesus cast demons out of people, as did His disciples. Whether or not we accept the idea of sexual tempters, there is no doubt that demons themselves are real.

The male counterpart of the succubus is the incubus, from the Latin incubo for “nightmare.” An incubus was supposedly a male demon who would lie with sleeping human women in order to have sexual intercourse with them. Incubi were thought to be able to father children, and the half-human offspring of an incubus was called a “cambion.” Merlin, the legendary wizard from the King Arthur legends, was supposedly sired by an incubus, from whom he received his supernatural powers and abilities. Both succubi and incubi were the products of medieval superstitions and were most likely efforts to explain the natural phenomena that occur during sleep—nightmares, sexual dreams, sleep paralysis and night terrors. They are also thought to have been efforts to explain away nighttime rapes and other assaults on women by friends, relatives and even the clergy. It would have been easier to attribute such attacks to the supernatural than to admit they came from some person in a position of trust.

As Christians, we are warned against worshiping demons (Leviticus 17:7), and even their names should be forgotten (Zechariah 13:2). Some people study demons thinking that will help them carry on spiritual warfare. All we really need to know about the enemy is this: “Every spirit that does not confess that Jesus Christ has come in the flesh is not of God” (1 John 4:3, NKJV). Our focus should be on learning more about the One who “has delivered us from the power of darkness and conveyed us into the kingdom of the Son of His love, in whom we have redemption through His blood, the forgiveness of sins” (Colossians 1:13-14, NKJV). When we hide God’s Word in our hearts, it keeps us from sinning against Him (Psalm 119:11) and gives us the weaponry to fight off any attack of Satan or his demons (Ephesians 6:17). 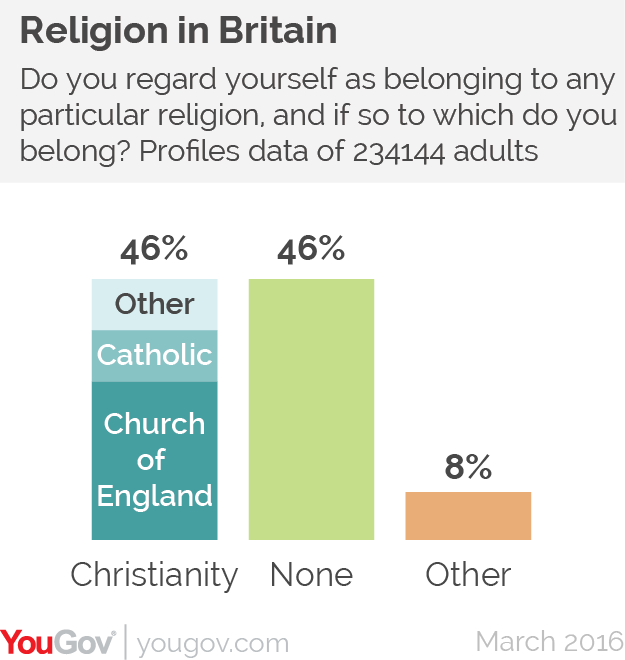 A new analysis from YouGov Profiles of nearly 12,000 people who affiliate with Christianity and a control set of 39,000 British people representative of the whole population reveals some startling juxtapositions in belief. Asked to say which of 14 spiritual or paranormal phenomena they definitely do or do not believe in, only 41% of Christians say they definitely believe in a Creator while 18% say they do not. 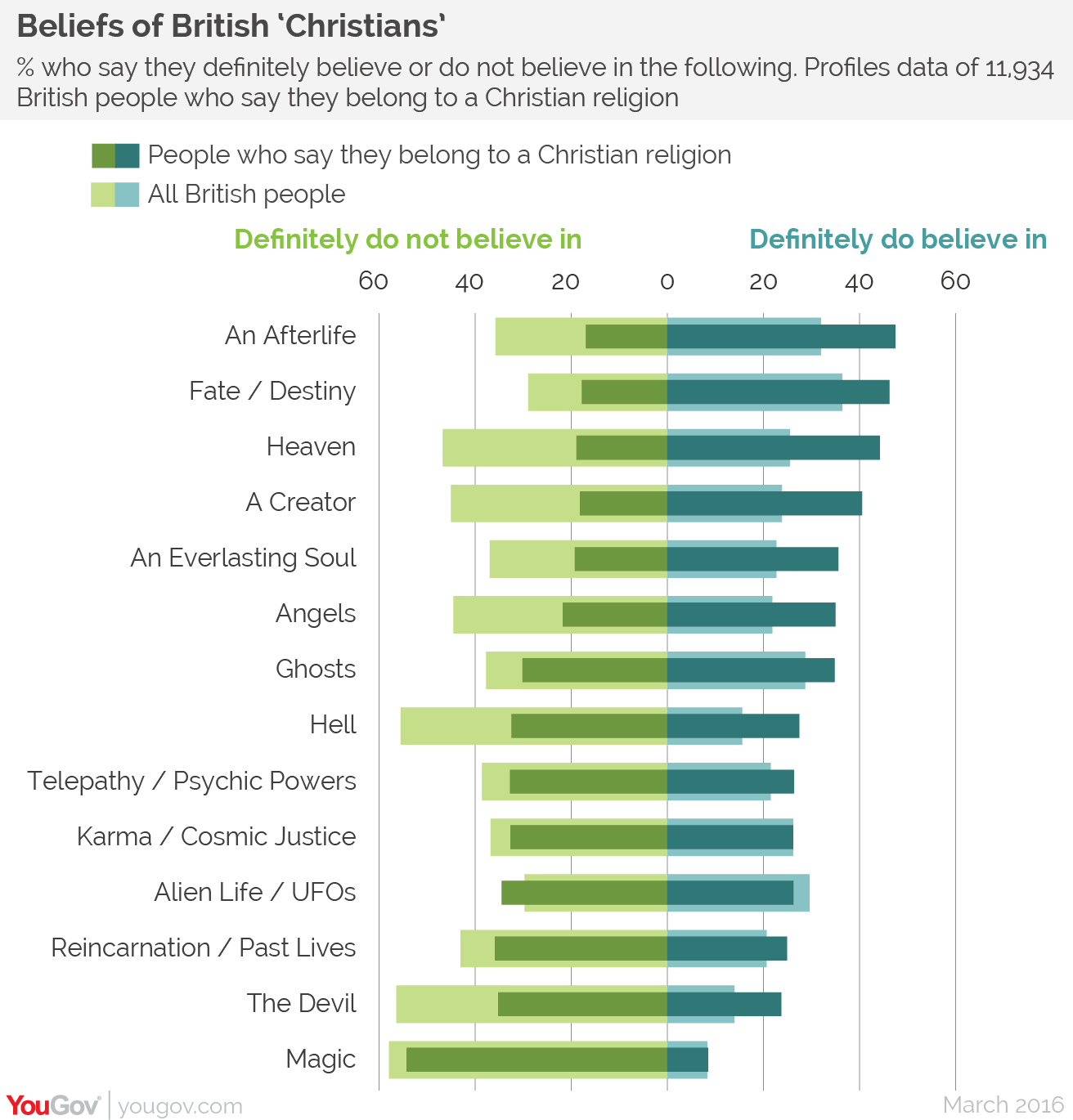