I can only imagine what John Wesley is thinking, and saying right now in heaven to God and our Lord Jesus Christ! 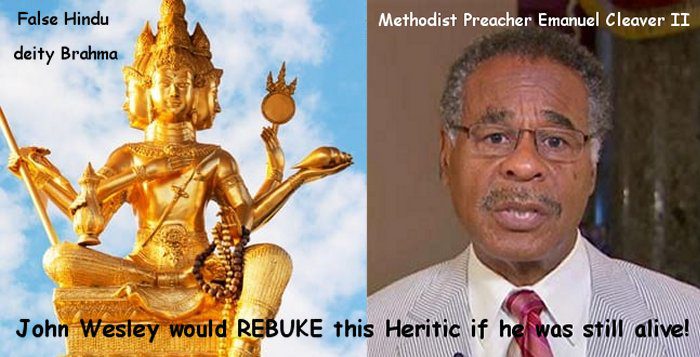 US Congress opens with ‘Blasphemous’ Prayer to Hindu Idol Brahma

Cleaver asked the Hindu deity Brahma for “peace across the land” and inside Congress as well.

“The god who created the world and everything in it: Bless us and keep us may the lord make his face to shine upon us and be gracious unto us. May the lord lift up the light of his countenance upon us and give us peace peace in our families, peace across this land and dare I ask o lord, peace even in this chamber. Now and evermore, we ask it in the name of the monotheistic god brahma and god known by many names by many different faiths”

But just in case worshipping a Hindu idol wasn’t controversial enough, Cleaver then concluded the ‘prayer’ with a politically correct play on the word ‘Amen.’

Just for your Biblical education,  “Amen” is a word of Hebrew word meaning “so be it” or “truly.”  It is not a gendered term and has nothing to do with “maleness” or “masculinity.”

“If Amen translates to ‘so be it’ or ‘truth,’ what does awoman mean?” one tweeted. “This can’t be real, right? Nobody is actually THAT STUPID?!” another wrote.

Here is a transcript of this Fool invoking demons:

Eternal God, noiselessly we bow before your throne of grace as we leave behind the politically and socially clamorous year of 2020. We gather now in this consequential chamber to inaugurate another chapter in our roller coaster representative government.

Wait, this Clown wants to ” leave behind the politically and socially clamorous year of 2020″, and then injects political and social clamor throughout his prayer to false gods!  What a Hypocrite!

The members of this august body acknowledge your sacred supremacy and therefore confess that without your favor and forbearance we enter this new year relying dangerously on our own fallible nature.

God, at a moment when many believe that the bright light of democracy is beginning to dim, empower us with an extra dose of commitment to its principles. May we of the 117th congress, refuel the lamp of liberty so brimful that generations unborn will witness its undying flame.

And may we model community healing, control our tribal tendencies and quicken our spirit that we may feel thy priestly presence even in moments of heightened disagreement.

May we so feel your presence that our service here many not be soiled by any utterances or acts unworthy of this high office, and insert in our spirits a light so bright, that we can see ourselves and our politics as we really are, soiled by selfishness, perverted by prejudice, and (unintelligible) by ideology.

Now may the God who created the world and everything in it bless us and keep us. May the Lord make his face to shine upon us and be gracious unto us. May the Lord lift up the light of his countenance upon us and give us peace. Peace in our families. peace across this land and dare I ask o lord even in this chamber. Now and every more.

We ask it in the name of the monotheistic god, Brahma, and god known by many names by many different faiths. Amen and Awomen. “

NO mention of the Lord Jesus Christ who USED to be the Lord of Methodism! And where did the “Awomen” come from?

We have officially reached the ninth level of hell in this country.

The proposed rules were announced by Democratic Massachusetts Rep. James McGovern, chairman of the Rules Committee, and Nancy Pelosi.

According to the Democrat rules for “gender inclusive language,” their plan “modernizes the use of pronouns, family relationship terminology, and other references to gender in order to be inclusive of all Members, Delegates, Resident Commissioners, employees of the House, and their families — including those who are nonbinary.”  Source

These Methodist Preachers have a history of Biblical Ignorance, Blasphemy and Heresy!

Bear in mind that the “God of many names” has historically been applied to BAAL, not to the Creator.  The Creator though he has many titles by which he is known, himself told us the NAME by which we are to refer to HIM.  That name is I AM.  THE I AM, because HE IS THE GOD.  There is no other.

It is appropriate that Pastor Cleaver addressed Brahma.  His prayer is a perfect demonstration of the level of mindlessness we have reached in our nation and the world.  ALL the Eastern influence through Yoga, SAMA, Martial Arts, and Meditation have created permanently empty minds in the masses.  They have emptied their heads and filled their spine (the control system of the body) with the lying Kundalini Serpent.

The elite have staged this prayer on the floor of our congress as a magic spell.  It serves to help the masses get accustomed to the practice and the idea of accepting all gods as ONE god.  It also helps to condition the masses to accept the changes being implemented.  For years we have been denied the right to pray in public and government buildings and/or at government and government sponsored events.  Now that people are willing to allow prayer in our government, they want to make sure it is NOT PRAYER to the one TRUE an LIVING GOD.   They don’t care what name you call him, as long as you are praying to SATAN.

Cynthia Pawl edited and added to this writing