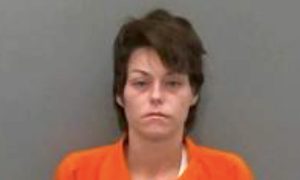 A Jefferson County woman was arrested on drug-related charges Sunday after she entered a church on Grider Field-Ladd Road and, according to a member of the congregation, “begin speaking demonically” and saying “someone was going to die.

Brittany Snow-McAfee, 28, allegedly told Pine Bluff police officer Vernita Burns that Burns and members of the church were “all devil’s children” and she (Snow-McAfee) was “there to take a soul.”

Vice and Narcotics Detective Jeremy Crosby said in a probable cause affidavit that when Burns arrived at the church at 600 Griderfield-Ladd Road, she saw Snow-McAfee standing beside a truck in the middle of the church driveway talking to a woman who was a member of the congregation.

When Burns asked Snow-McAfee for her name, she said “Jesus” and complied when Burns told her to put her hands behind her back; she was handcuffed without incident.

Snow-McAfee also confirmed that she was the one who had been driving the truck, and when Burns searched the purse during an inventory prior to releasing it to a wrecker, she found a glass smoking pipe that had burn marks and a substance that field-tested positive for MDMA (Ecstasy).