New fire in Crowley’s Boleskine exposes a plan by the O.T.O. and the British Intelligence to establish the ultimate Satanic Temple in Scotland 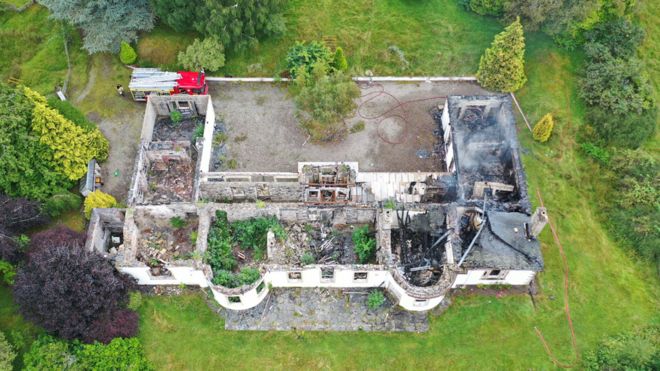 Leo Zagami – Another fire has destroyed  in Scotland that was damaged in a previous mysterious fire in 2015. The Scottish Fire and Rescue Service said the alarm was raised shortly before 4 pm on Wednesday and two firetrucks were sent to Boleskine House located on the south-eastern shore of Loch Ness, close to the village of Foyers, Inverness Shire.

However, this time the Scottish police said it believes the fire was started deliberately and has appealed for witnesses to come forward. Interestingly enough, this happened on July 31st, during the so-called “dog days of the summer” when Sirius the Dog Star often cited in Crowley’s writings, was shining its brightest.

As most already know, Aleister Crowley is known today for his involvement in the Illuminati network, and for his occult writings that have influenced the dark side of the New Age scene like no other. Crowley purchased this mysterious old mansion on the shores of Loch Ness to perform one of the most dangerous black magic rituals ever attempted so he could open the portals of hell.

The mansion was constructed in the late 18th century by Archibald Fraser. According to a local legend, there was once a church on the site which caught fire burning it’s whole congregation to death, and it was because of this terrible event that Crowley decided to purchase Boleskine House in 1899 as the self-styled, “Laird of Boleskine and Abertarff.” He evoked evil entities that would materialize and later were channeled through his wife in 1904 for his Liber AL bel Legis commonly known as The Book of the Law,the unholy book of his new Satanic religion. Crowley continued to visit until 1913, when he eventually sold the property. I have written about his occult working in Boleskine in my book, The Invisible Master: Secret Chiefs, Unknown Superiors, and the Puppet Masters Who Pull the Strings of Occult Power from the Alien World.

Aleister Crowley’s magick at Boleskine House is known as the “Abramelin Operation” taken from The Book of the Sacred Magic of Abramelin the Mage, a famous grimoire (book of magical knowledge), dating back to at least the middle of the 15th century. Crowley seems to have become aware of this ritual from the 1897 translation of the book by occultist and Illuminati kingpin Samuel Liddel Mathers, one of the founders of the Hermetic Order of the Golden Dawn, which Crowley had joined in 1898, before falling out with most of its members, including Mathers a few years later when they all understood Crowley was actually working for Satan’s Legion against them.

The purpose of performing this lengthy and intense Abramelin ritual is for the magician to communicate with his “Holy Guardian Angel” or Higher Self by dominating a bunch of demons. Unfortunately for Crowley and those around him the Abramelin rites seem to have succeeded mainly in summoning extradimensional demons or “the Abramelin devils” as Crowley used to call them, to aid him in kickstarting the End Times. People encounter evil entities every day, known as demons that are indeed supernatural creatures from an actual alternate dimension that exists parallel to our world, but to invite them permanently into our dimension you need to invite them, and that’s what Aleister Crowley was doing with his rituals. These creatures are said to possess the ability to warp what we understand as the laws of physics and they are even able to change their appearance.

That’s why some think that the unfinished Boleskine House ritual set in motion by Crowley might have accidentally summoned the legendary Loch Ness Monster that was brought to worldwide attention in 1933. One thing is for sure, during Crowley’s occupancy there were reports of a heavy, oppressive atmosphere at Boleskine, dark eerie shadows filled the house, fierce winds blew through the rooms despite calm weather outside, and strange figures were seen in the area.

There is also another dark legend that has obsessed the Ordo Templi Orientis, the secret society Crowley took over that we commonly refer to as O.T.O., and it’s the story of an underground passage linking the house with a nearby graveyard said to have been utilized by Crowley to obtain human bone powder used for Necromancy and spirit workings connected to the “Abramelin Operation.” Today, the practitioners of Thelema, Crowley’s sick religious philosophy are still instructed to “turn and face north to Boleskine” when conducting certain magical ceremonies and talk of this place as it is their version of Mecca.

“In the East, that is, in the direction of Boleskine, which is situated on the South-Eastern shore of Loch Ness in Scotland, two miles east of Foyers, is a shrine or High Altar.”– Liber XV

Crowley later sold Boleskine and it subsequently had a series of private owners including, in the 1970s, Led Zeppelin guitarist and Crowley fanatic, Jimmy Page. Boleskine House, that overlooks Loch Ness, was badly damaged by a blaze in 2015, and the ruin was sold earlier this year to The Boleskine House Foundation is connected to a Polish Satanist named Marcin Bartnicki, and various other influential Illuminati figures from the legal department of the infamous Ordo Templi Orientis, like old-time member of the British Intelligence community, Andrew Curley, who is usually given some very special missions like this one to create the ultimate demonic temple for the Illuminati in the British Isles.

The official reason given for the establishment of the Boleskine House Foundation is to raise money to help restore Boleskine House to its original historical condition, but in reality, they are trying to establish a “Spiritual retreat” for Satanists.

Boleskine House is a famous heritage B-listed estate with a rich history, but in 2015, Boleskine House suffered a devastating fire, rendering it in “ruinous condition” according to the Buildings at Risk Register for Scotland. As of 31 July, 2019, Boleskine House has been the victim of a malicious arson attempt and the remainder of the roof has burnt down, rendering the building into further ruin and pushing back the O.T.O.’s take-over of using the foundation as a cover-up. Upon complete restoration, The Boleskine House Foundation secretly coordinated by the O.T.O. wished to place the house in a charitable foundation and partly open the estate up to the public with the intention to further promote the estate’s history and evil legacy connected to their “Prophet” Aleister Crowley known also as “The Great Beast,” the infamous figure found in Chapter 13 of the Book of Revelation.

Since in his youth, once he departed from the ways of his fundamentalist Plymouth Brethren parents, Crowley was referred to by the title of “Beast.” Later on, in Cambridge, he not only accepted this nickname but expanded on it, calling himself, “The Great Beast” and signing his notes with the number “666.” Through different Hebrew transliterations, Crowley was even able to derive the value 666 from his name, “Aleister Crowley” and “Aleister E. Crowley” and the Greek phrase often used by him To Mega Therion (“The Great Beast”), that also has the value of 666, as does the Greek word Therion (“Beast”) when transliterated into Hebrew as ThRIVN.

I believe it’s safe to say that Crowley was not only evil, but he may have been chosen by the devil himself for his central role as “666” in the End Times because as the Book of Revelation teaches us: “Let him who has understanding calculate the number of the beast, for the number is that of a man; and his number is 666.”

So what has happened in Scotland could be a sign of God’s Will to stop the creation of this new Satanic Temple, and the work of Satanists connected to British Intelligence.