Galatians 6:3 “For if a man think himself to be something, when he is nothing, he deceiveth himself.” 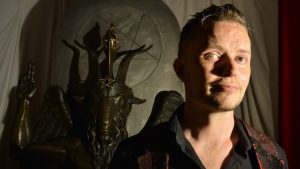 The organization, which focuses its efforts on the separation of church and state, wants applicants to send in creative applications — essays, poetry, works of art — by the end of August. It will then go through the submissions and give two $500 scholarships.

What’s all this then?

More from group about its take on education:

The Satanic Temple advocates the protection of bodily autonomy and the pursuit of knowledge. TST views intellectual exploration as a critical component of individual fulfillment. Often, however, people confuse learning with schooling. While learning involves a self-directed approach to better one’s understanding of things, schooling involves the imposition of an oppressive hierarchical structure that demands obedience to authority first and foremost and determines what knowledge should be disseminated and how it should be imparted. Compulsory schooling violates the fundamental civil rights of the children who are forced to attend. Schooling requires that students endure chronic stress along with a profound degree of tedium and boredom such that empathy is diminished, and depression and anxiety often ensue.

The group’s founder, Malcolm Jarry, told CNN that the idea for the scholarship stemmed from an email he received from a high school student asking him for a letter of recommendation for a religious scholarship being offered at her high school.

“I was disappointed that she did not receive the scholarship and saw that moment as an opportunity to offer our own scholarship that reflects our values,” Jarry told the outlet.

“In addition to promoting our values by honoring those who engage in pro-social rugged individualism, the scholarship allows students a rare opportunity to be critical of an institution that only rewards sycophantic adulation,” he said.

How do I get my student in on this action?

To apply for the scholarship, which opened Monday, students must answer one of two questions and be 2020 high school graduates.

Option No. 1: “What initiatives have you undertaken that are consistent with [The Satanic Temple’s] tenets and mission?”

Option No. 2: “Please discuss and describe in detail any one of the teachers who crushed your spirit, undermined your self-confidence, and made you hate every minute you were forced to be in school.”

According to the website, “Submissions can be in any reasonable form. Suggestions for submission formats include, but are not limited to, an essay, a poem, a work of art, a film project, or another creative expression.” The only requirement is that the work “must be original and the sole creation of the person submitting.”  Source: The Blaze