If you will bare with me I will show you the why Biblically!  It is because Hell is expanding!!

Now researchers have found more evidence for a whole new chapter deep within Earth’s past – Earth’s inner core appears to have another even more inner core within it.

Don’t know where Hell is? Take a few minutes to educate yourself here. Also CERN is trying to OPEN the Gates to Hell. There are many of places on Earth that are said to be portals, Gates to Hell!

Maybe you are one of those scoffers that don’t believe in a place called Hell, or even Heaven for that matter. If YOU are WRONG, and YOU are, Then you have a really big problem!! See What will Hell be like  And A Letter from Hell

Earth’s inner core may be filled with a weird substance that is neither solid nor liquid.

New computer simulations suggest that Earth’s hot and highly pressurized inner core could exist in a “superionic state” — a whirling mix of hydrogen, oxygen and carbon molecules, continuously sloshing through a grid-like lattice of iron.

Read the Bible people. That “weird substance” is the Souls of Billions that are in TORMENT!

Scientists detect signs of a hidden structure inside Earth’s core 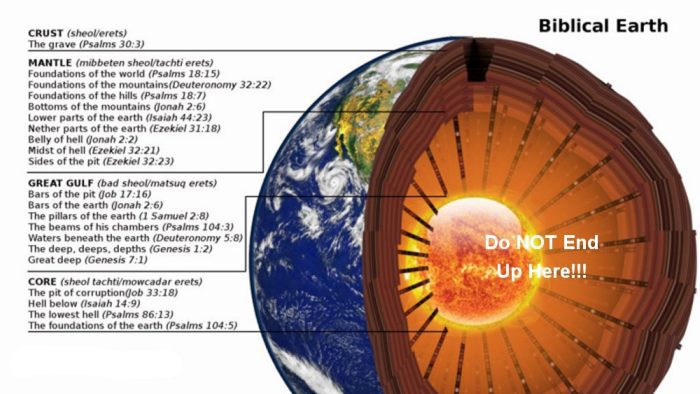 It may be time to rewrite the textbooks, as scientists have discovered the Earth has a ‘fifth layer’ in the form of an innermost inner core at the center of the planet.

While most of us take the ground beneath our feet for granted, written within its complex layers, like pages of a book, is Earth’s history. Our history.

Now researchers have found more evidence for a whole new chapter deep within Earth’s past – Earth’s inner core appears to have another even more inner core within it.

Our knowledge of what lies beneath Earth’s crust has been inferred mostly from what volcanoes have divulged and seismic waves have whispered. From these indirect observations scientists have calculated that the scorchingly hot inner core, with temperatures surpassing 5,000 degrees Celsius (9,000 Fahrenheit), makes up only one percent of Earth’s total volume.

“It’s very exciting – and might mean we have to re-write the textbooks!” she added.  Source

Can You Not See That The Crust Of Our Planet Is Becoming Increasingly Unstable?

Michael Snyder | March 2021 – How much shaking is it going to take for most people to wake up?  As I write this article, New Zealand continues to be slammed by large earthquake after large earthquake.  On the other side of the globe, Iceland has been hit by more than 18,000 earthquakes in the past week, and authorities are warning that two volcanoes in a “densely populated” region of the country could erupt at literally any moment.  On Wednesday, I wrote that “we are moving into a time when I believe that the changes that are happening to our planet will accelerate dramatically”.  That was before an area off the New Zealand coast was shaken by a magnitude 7.3 earthquake, a magnitude 7.4 earthquake and a magnitude 8.1 earthquake on Thursday.  Following the magnitude 8.1 earthquake, there have been 33 aftershocks of at least magnitude 5.0.  Of course by the time you read this article that number will inevitably be even higher.

As I have warned so many times, the infamous “Ring of Fire” is roaring to life, and the major quakes that just shook the New Zealand coast prompted authorities to warn of the potential for tsunamis…

The most powerful was an 8.1 quake that hit some 620 miles northeast of New Zealand on Friday morning, the U.S. Geological Survey said. Two earlier quakes registered magnitude 7.4 and magnitude 7.3.

Thankfully, no large tsunamis were generated this time.

But next time could be much different. Continue reading here

We have several possibilities as to why pressure is increasing inside the Earth.

That pressure is why Volcanos are billowing, the Mantel is Cracking, which is causing the Earth to shake.  BTW, the Powers that be, the Luciferian’s, do have Earthquake Machines!

We will not deal with Science as most of the Science is FLAWED! We will only deal with the Biblical, Spiritual part of why the earth is expanding, literally being pushed apart from within!

In order for something to expand, such as a balloon, something must be added like air, gas or water. Water actually combines all three of those elements when it becomes heated to the point boiling creating steam. Anyone who knows how a pressure cooker works what will happen if that pressure cooker or boiler is left unregulated. KABOOM!!

Molten rock,  Lava, comes up from Hell, hits the ground water and that is what causes some volcanoes to erupt violently.

So HOW does the Lava get pushed UP from the Core??? Well here is what I believe is happening.

If we could see into the spirit world, which is another dimension that is all around us, we would see Angels, Fallen Angels and Demons. They are “spirit beings”.  What we would NOT see are the souls/spirits of humans who have died! They are in one of two places when the physical body dies.

Here is what is important to this writing and what you must understand. All of the spirit beings and the souls/spirits of dead humans TAKE UP SPACE! In the case of Hell, the inner part of the earth, there is limited space!

If you keep packing stuff into a confined space, it will either EXPAND or Burst!

One is that more and more of Lucifer’s minions are being confined there, and pardon the pun, but they are raising Hell down there! Billions of Demon Spirits and Fallen Angels, perhaps Trillions of them, are being packed in there.

Isaiah 14:12-15 “How art thou fallen from heaven, O Lucifer, son of the morning! how art thou cut down to the ground, which didst weaken the nations! 13 For thou hast said in thine heart, I will ascend into heaven, I will exalt my throne above the stars of God: I will sit also upon the mount of the congregation, in the sides of the north: 14 I will ascend above the heights of the clouds; I will be like the most High. 15 Yet thou shalt be brought down to hell, to the sides of the pit. 16 They that see thee shall narrowly look upon thee, and consider thee, saying, Is this the man that made the earth to tremble, that did shake kingdoms; 17 That made the world as a wilderness, and destroyed the cities thereof; that opened not the house of his prisoners?”

Now Lucifer, Satan, is not yet confined in Hell. He will be cast there soon enough Revelation 20:3! The book of Job tells us that Satan is roaming to and fro on the Earth. Job 1:6-7 and Job 2:1-2

But many Demons and Fallen Angels are in Hell right now.  Revelation 13:11 Revelation 17:8  See The United Nations Erects an Idol That Resembles The Beast Described in the Bible for more info on what is coming OUT of Hell very soon!

With just two weeks to go until 2022, the Ring of Fire is suddenly ROARING BACK to life  Johnny Cash song?

Then there are the multitudes of Millions HUMAN Souls/Spirits that are going to Hell awaiting Final Judgement. They are not there because God rejected them, NO! They are there because THEY REJECTED Jesus Christ!

Of the Billions and Billions of people that have died, the majority have gone to Hell, and thereby expanding it! Jesus said in Matthew 7:13-14 “Enter ye in at the strait gate: for wide is the gate, and broad is the way, that leadeth to destruction, and many there be which go in thereat: Because strait is the gate, and narrow is the way, which leadeth unto life, and few there be that find it.”

Are you a Wide or Narrow Gate believer? If you are a Wide Gate believer, then, when YOU die, you will be helping to expand Hell and that is where your soul/spirit will be!