In my younger years, I got myself into a very bad situation. There were many factors involved and I don’t really need to go into detail, the thing that is important is that I made a decision to have an abortion. Between the situation I was in, the pressure from the father, and the lies told by the clinic, I was rushed into a decision that I did not want to make. But, I agreed and signed the paper. I had to wait the 24 hour waiting period that was the law at that time. I went in the following morning with a heavy heart and while I was waiting in the clinic… I had a change of heart. I knew it was wrong and determined not to go through with this horrendous act. When I spoke to the doctor/manager of the clinic he told me I could not change my mind. The contract had been signed and it was binding. It was too late. They dragged me into a room and gave me some kind of shot. When I woke up, it was all over. Shortly after the abortion, I became deathly ill. I went to see my regular doctor and he said “you have had an abortion”. I asked him how he knew. “He said, because who ever performed the abortion used dirty utensils, and you have a very bad infection. You are lucky it did not kill you.”

Through the years, I often wondered why it was so important that I not break that contract. Why were they so adamant about taking my baby? And why were they willing to risk exposure? I could easily have gone to the authorities.

Now, that I know what I know. Especially after seeing what has come out about Planned Parenthood and the selling of organs, tissues and cells, and the lack of moral fiber of scientists and medical professionals in their race to unlock the secrets of DNA, I can see why each fetus/baby is so coveted, they are highly financially viable. 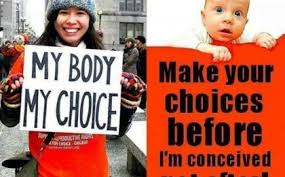 How often do you hear a liberal woman/selfish child trapped in a grown liberal woman’s body make the claim, “My body, my choice”. I see it literally every time we write about the importance of being pro-life. It’s right up there with the, “How is a MAN trying to tell me what to do with my body?”

The fact that it’s even a debate whether or not a woman is able to kill an unborn child because she was irresponsible and doesn’t want to be punished with a baby (as Obama likes to say) is mind-boggling. I guess they are consistent thought that don’t believe in personal responsibility under any circumstances.
If you don’t want to have a baby, how about you try having sex with condoms and birth control, or the most radical idea, don’t have sex until you’re ready. Source: http://www.youngcons.com/legendary-r…ody-my-choice/

Sadly, the abortion issue was the opening of the proverbial “Pandora’s box” so to speak. Yes, I am aware that the female genitalia is often referred to as a “box”. So, there is some real symbolism here. Understand, that by making the issue a woman’s “RIGHT TO DO WHAT SHE WANTS WITH HER BODY”, they took the focus off what was really going on and the true end goal. Everyone is naturally going to be sympathetic to the cause of a woman’s right to her body.

Once that was established, the first thing they had to do was dehumanize the child inside. To convince the world that the infant growing in her womb was not even a real being. Just a hunk of flesh, not entitled to any rights at all. What people failed to see is once they had accomplished that, the lines had already been blurred. Now, who decides when a life is viable, human, a person with rights? They also failed to understand that the scientific community who were behind and backing this movement, were really after the “fetuses” for their experimentation.

In the early stages of scientific genetic discovery, human tissue samples and subjects were harder to come by, due to societies ethical beliefs and laws. They have successfully changed all of that. They have managed to pervert our values, destroy our faith and reverse our laws. Now, they deal in numbers, because their goal is to pollute all DNA, to turn everyone into a Chimera. The evil force behind all of this is none other than Satan himself. He wants to destroy everything that GOD created. He also wants to create his own race of slaves to worship and follow him.

I can tell you one thing, if you ever want to meet demons face to face, join in on a protest at an abortion clinic. I have been to a few myself. I have witnessed abortion advocates displaying the most disgusting and frightening behavior I have ever seen in my life. Their faces become animated in the most inhuman deformities, as they spew out the most revolting vulgarities, flashing their breasts and butts. They will spit on you, punch and slap you, throw things at you, even urinate on you. Usually while the Christians quietly and calmly pray. I kid you not. And the police, will not protect you. In fact, at one protest I attended the police began to harass the Christians and threaten them with jail. As we all began to disperse, the Pastor who was with us knelt on the pavement and began to pray. Immediately, the police kicked him and hit him with their bully clubs, all the while he was doing nothing but praying. They ended up carrying him off to jail. Meanwhile, the abortion advocates continued to behave as above, with no response to them by the police at all. It was eye opening. The battle between good and evil is clearly raging.

The killing of infants has always been a major focus of Satanists. Satan loves sacrifice and when blood is spilled upon the ground in a violent way, he gains power. But, beyond that, these precious little bodies are providing the building blocks required for Satan and those who follow him to build a race of beings subject to their whims.

Abortion is not only a crime against the unborn child, it is at the very least an additional assault against the pregnant woman and possibly a crime against the rights of the father, as well. Often women do not even advise the father of the pregnancy. After all it is “her body”. The women who have abortions are often at a very vulnerable time in their life, facing very scary circumstances, with little or no emotional or financial support. They are fed a pack of lies that have been supported by our culture, and offered few, if any, other viable alternatives. No one warns them about the dangers involved, the physical ravages their body will suffer, or the emotional and spiritual aftermath that will continue through the rest of their lives. No one tells them of the excruciating pain and suffering the baby will experience not only during the abortion but many times ongoing, as they are often kept alive for some time afterward, for the purpose of medical/technical experimentation. No one tells the mom’s about the way this experience will affect their spiritual life, or that there will be consequences for their actions both here on earth and in the life to come. Whether you accept or believe this or not, it is true none the less.

ABORTION -THE SIN THAT NEVER ENDS (OR ABORTION THE SIN THAT KEEPS ON SINNING)
http://stemcells.nih.gov/info/basics/pages/basics1.aspx
STEM CELL BASICS

Continued in Part 11  The LGBTQ MOVEMENT and how it relates!