With the news of the SCOTUS about to overturn Roe v Wade that made Sacrifice to Lucifer, aka Satan legal, the Demonic Clowns in the Satanic Temple have declared that Abortion is their Religious Ritual. That proves it to be CHILD SACRIFICE to their fallen angel Satan. 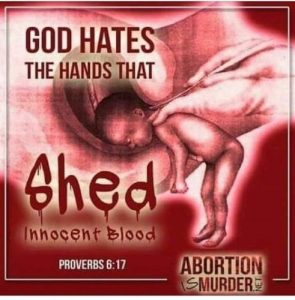 Psalms 106:37-43 “Yea, they sacrificed their sons and their daughters unto devils, 38 And shed innocent blood, even the blood of their sons and of their daughters, whom they sacrificed unto the idols of Canaan: and the land was polluted with blood.39 Thus were they defiled with their own works, and went a whoring with their own inventions. 40 Therefore was the wrath of the LORD kindled against his people, insomuch that he abhorred his own inheritance. 41 And he gave them into the hand of the heathen; and they that hated them ruled over them. 42 Their enemies also oppressed them, and they were brought into subjection under their hand. 43 Many times did he deliver them; but they provoked him with their counsel, and were brought low for their iniquity.”

This is something that I, and many others, have been saying for a long time. Satanists have denied it, saying they don’t believe in Satan. This is not the first time they have made this claim in courts of the USA.

They just can’t help themselves, and it is good to see them coming right out in the open with it. They are Arrogant, just like the Communists and Sexual Perverts, who are no longer hiding in the closet!

The world is beginning to see that those they call Conspiracy Theorists have been right all along.  Alex Jones was right???

They are also coming to realize that the “Satanic Panic” is another term created by the evil ones to deflect legitimate concern and avoid exposure. The devil has been very busy and pretty successful at recruiting Biblical Ignorant godless Fools.

The fact that they are saying that abortion is child sacrifice and therefore entitled to religious freedom, means it is not a healthcare issue, and should not be covered by medical insurance for which the public would be forced to pay. Just as they whine and cry that Christianity should not be forced on them, they have no right enforce their religious practices on us!

It should have been obvious long before now that Satan and his demons are behind abortion. Feminists, really just Jezebel of the Bible, (1st Kings 16:31 – 1st Kings 21:23 – 2nd Kings 9:37) clearly display obvious evidence of demonic possession. They behave in appalling and horrific ways when they are declaring their rights publicly.

Now, the Satanists are coming right out and telling you what is going on. OPEN YOUR EYES PEOPLE!!

Satanists seething over the Supreme Court’s potential overturn of Roe v. Wade will refer to abortion as a “Satanic” ritual in an upcoming court filing.

In an insane message from The Satanic Temple (TST) last Thursday, Lucifer-worshipping leftists say they will use religious freedom arguments in efforts to preserve their members’ rights to murder babies. 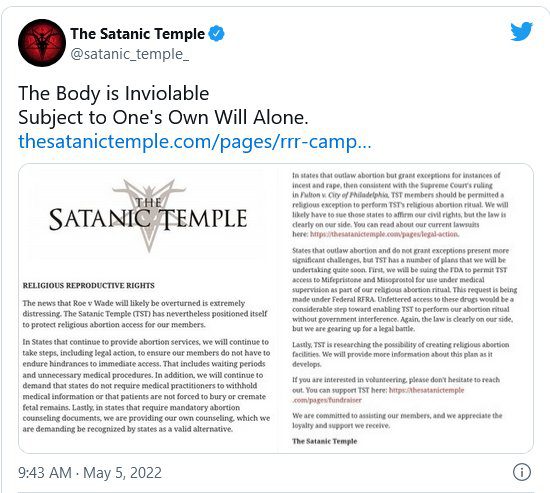 “In states that outlaw abortion but grant exceptions for instances of incest and rape, then consistent with the Supreme Court’s ruling in Fulton v. City of Philadelphia, TST members should be permitted a religious exception to perform TST’s religious abortion ritual,” the Temple wrote in a statement.

The Temple also claimed it would continue fighting for speedy abortion access in states where it’s legal, and that they would also demand patients not be required to bury their aborted fetus.

“In addition, we will continue to demand that states do not require medical practitioners to withhold medical information or that patients are not forced to bury or cremate fetal remains,” the Temple bizarrely wrote.

The statement added that The Temple “is researching the possibility of creating religious abortion facilities.”

If ever there was a question whether abortion is Satanic, evil, or demonic – here’s your answer