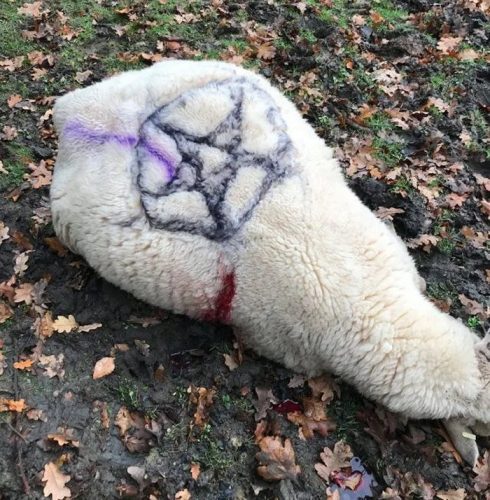 The Sun UK – MODERN-DAY Satanists are feared to be slaying animals in the New Forest in Hampshire after several sheep and cattle were stabbed to death there earlier this month.

Three cattle were found with stab wounds in the hamlet of Linwood and two sheep were fatally slashed and marked at Bramshaw village. Satanic symbols were also found daubed on Bramshaw Church.

One sheep was found dead with a cross and a pentagram, a symbol associated with magic, spray painted on to its body.

Judy Rudd, who has lived in the New Forest for 40 years, was out walking her two dogs in Bramshaw when she came across the dead sheep.

Mrs Rudd said: “It had purple and green aerosol symbols sprayed on it. It was a pentagram and a cross. It had been stabbed to death. The wounds were in the side of the body by the rib cage.

“It was very unpleasant… some people think it’s sinister.”

Her husband Julian added: “I don’t agree that it’s done to shock – you don’t go around knifing animals simply to shock people.

“It’s related to something other than simply a desire to injure animals – it’s either witchcraft or whatever. It’s rather worrying.”

Days later, Reverend David Bacon discovered an inverted cross and the number 666 had been painted on the door of St Peter’s Church in Bramshaw.

He said: “I’ve been told one of the symbols was a 666 which of course is a biblical sign of the devil, or Satan, so it could have [sinister overtones].

“I’ve been here 15 years and seen a lot of stuff, but nothing like this.

“It could just be kids, but I don’t think it is, given the context.

“There’s been witchcraft round here for hundreds of years – the New Forest is well known for witchcraft and black magic happening, and this has obviously gone up a level.”

The New Forest became associated with witchcraft after the author and occultist Gerald Gardner, who died aged 79 in 1964, claimed a group of witches held meetings there in the early 20th century.

Around 800 New Forest properties and their inhabitants have common rights dating back to the 13th Century which gives them rights to graze their animals in the open forest.

The disturbing incidents took place between November 16 and 20.

Tony Hockley, chair of the New Forest Commoners’ Defence Association, warned the attacks will have a profound impact on the community for years to come.

“Things like this will deter people from carrying on the tradition of grazing animals on the forest and that hurts everyone.”

Hampshire Police said it is investigating whether the “unusual” incidents are linked. Read more here