He is an adherent of ‘ Santeria’ Witchcraft

It’s happening more than you think, and some are practicing Voodoo! Only protection is being Born Again and covered by the Blood of Jesus! 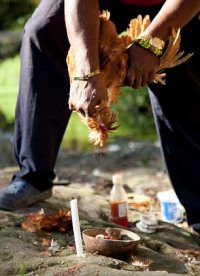 After a tip-off from a neighbor, investigators found at least 22 farm animals in Emilio Otero’s three-bedroom apartment in New Jersey including goats, chickens and a dead pigeon

A doctor has been accused of sacrificing livestock for Santeria witchcraft in his flat after investigators discovered 22 farm animals being kept in his New Jersey home on Thursday. (August 19, 2021)

When authorities arrived at Emilio Otero’s property on Van Horne Street they were met with “seven to nine” goats, several chickens and even a dead pigeon nailed above a door.

The investigators from the Division of Environmental Health for Jersey City visited the apartment after a tip off from Emilio’s neighbors.

Animal service agents were called to the flat and they removed at least 22 farm animals that had been kept in the three bedroom property.

The apartment’s owner, U.S. Navy Sailor Alyza Brevard-Rodriguez says that Otero hasn’t paid rent on the flat since May and that she believes he is sacrificing animals and causing damage to her property.

H. James Boor from the Division of Environmental Health for Jersey City stated there were “about four or five dead chicken carcasses, their throats slashed and they were left in a pile.”

Santeria faith is based on the building of relationships between humans and deities and animal sacrifice is central to the religion.

The animal is sacrificed to be used as food rather than for a particular spiritual purpose, though some believers do offer sacrifices to build their relationships with the faith’s deities.

Pictures taken by the investigators show goats in the backyard of the property near to the pile of chicken carcasses. Read more here

Santeria: A mix of African Voodoo and Catholicism

Santeria: A mix of African Voodoo and Catholicism Part 2