Revelation 18:2 “And he cried mightily with a strong voice, saying, Babylon the great is fallen, is fallen, and is become the habitation of devils, and the hold of every foul spirit, and a cage of every unclean and hateful bird.”

Only 2 places in America are named BABYLON. One in Illinois and in NEW YORK!

Just like AHAB, Governor Andrew Cuomo and Mayor Bill de Blasio have Reared up an Altar, a High Place and a Grove to Baal and Moloch! It has essentially made New York State a HOUSE OF BAAL!

When he signed and they celebrated, the wicked ones just PROVOKED the LORD and ensured the Wrath of God to fall on the entire state! You best Pray Christians!

1st Kings 16:32-33 “And he reared up an altar for Baal in the house of Baal, which he had built in Samaria. And Ahab made a grove; and Ahab did more to provoke the LORD God of Israel to anger than all the kings of Israel that were before him.”

And that is not all. It has also officially become just like Sodom and Gomorrah!

Christian News – Just days after enshrining in New York law the “right” for mothers to have their unborn children murdered, and in some cases, even up until birth, Gov. Andrew Cuomo has now signed two new bills into law: The Gender Expression Non-Discrimination Act (GENDA) adds “gender identity and expression” to existing prohibitions against discrimination in housing and employment, and likewise makes violent crimes or threats against a person on the basis of their “gender identity” a hate crime. A separate bill prohibits mental health professionals from working to turn youth from homosexuality and transgenderism, but does not apply when children are counseled in “acceptance [and] support” of such lifestyles.

Saying “God bless you” to various individuals who have been behind the cause, who were cheered and applauded by those in attendance at the signing on Friday, Cuomo told those gathered at the LGBT Community Center in Manhattan that the legislation he has signed in recent days puts forward a “different set of social values than what we see in Washington.” Read the rest here

As the song by Jim Croce “You Don’t Mess Around With Jim” says:

You don’t tug on Superman’s cape, You don’t spit into the wind
You don’t pull the mask off that old Lone Ranger… nor do you Mock, Shake your Fist at, and Provoke GOD!!!

How America Just Built an Altar for Satanic Worship 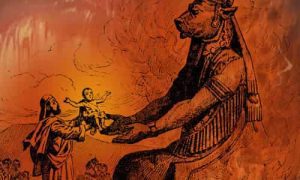 By David Hoffman – Things are shifting in America before our eyes. The state of New York recently passed a bill legalizing abortion right up the moment of birth. The name of the bill was the Reproductive Health Act. It had previously been blocked for years when Republicans controlled the State Senate in New York. Because the Democrats recently took both houses in the New York legislature, it was quickly passed. The Senate passed it 38-24. In the Assembly, it passed by a 92-47 margin. Gov. Cuomo quickly signed into law Tuesday night.

This is an ominous sign concerning the direction of abortion in our country. This bill could play a role in opening the floodgates in the future, as inevitably, other states begin to follow New York’s lead. We cannot take the passing of this bill lightly. Some people may argue that the pro-life movement is stronger than ever, however, just days ago an Iowa judge struck down a state law banning a woman from obtaining an abortion once a fetus’ heartbeat is detected, saying it violated the state’s constitution. There is still a very strong, vocal and bold resistance to the pro-life movement. We must remember that the legalization of gay marriage began with one state which then led to other states adopting similar laws. We have no future guarantee that the same trend will not occur regarding abortion laws in our nation.

When we look at abortion purely from a spiritual lens, abortion is satanic worship. There is truly no way around this reality, and in the following paragraphs, I will explain why this is so.

If we as believers are to be in the truth and in the light, we have to acknowledge abortion for what it really is: the shedding of innocent blood.

The shedding of innocent blood is a clear violation of the fourth commandment, which states in Exodus 20:13, “You shall not murder.” Proverbs 6:17b also says God hates “hands that shed innocent blood.” The right to life is the most valuable right that has been given to any human being by the Creator. This is why from the beginning of human history, the devil has sought to twist people’s hearts and to tempt them to murder. Murder is always inspired by Satan, whether it be in the womb or outside of it. The shedding of innocent blood is a form of satanic worship. It honors Satan. It never honors God.

Many pagan cultures throughout history had child sacrifice as part of worship to their gods. They would sacrifice children to idols in the hope that it would bring favor, blessing and a better life. The modern abortion industry, at its heart, is no different from the child-sacrifice rituals of the ancient world and pagan cultures. The only difference is that in ancient times they didn’t sacrifice children while they were still in their mother’s womb.

In 2004, the Guttmacher Institute anonymously surveyed 1,209 post-abortive women from nine different abortion clinics across the country. Of the women surveyed, 957 provided a main reason for having an abortion. 92.5 percent of those survey gave purely selfish reasons for why they decided to have an abortion. That means that 92.5 percent of these children were sacrificed in the hope that it would result in a better life for the mother.

We as believers cannot allow culture and the mainstream media to define abortion in our minds. Abortion truly is not an issue of reproductive rights or women’s health. An extremely small percentage of abortions are performed to save the life of the mother. Half of one percent of abortions are done because of rape or incest. The majority of abortions occur because it is the most convenient option for a woman who does not want deal with the consequences of having a child.

The Old Testament deals with this topic of child sacrifice. In biblical times, one of the gods mentioned throughout the Old Testament was Molech. This was a god of the Canaanites and Ammonites. One of the primary ways ancient cultures showed worship to this god was to sacrifice children to it. They would place the children in the idol’s metal hands, which had been heated up to the point that they were red and smoldering hot, or they would just throw the children into the fire pit below the idol.

God judged Israel harshly for participating in this satanic ritual. Jeremiah 32:35-36 says that Israel offered up its sons and daughters to Molech and that God would judge and lead the nation into captivity for doing so. There are other instances where God warns Israel about participating in this practice. It is not a one-time occurrence.

Psalm 106 says, “They worshiped their idols, which became a snare to them. They sacrificed their sons and their daughters to false gods. They shed innocent blood, the blood of their sons and daughters, whom they sacrificed to the idols of Canaan, and the land was desecrated by their blood. They defiled themselves by what they did.”

This struggle against the abortion industry will be a long-haul in our nation. This struggle does not look as though it will end soon. We as believers must stand up against abortion and stand for the lives of the unborn. We must always speak unashamedly concerning the issue while conducting ourselves lovingly with those on the other side.

Ultimately, abortion also hurts the mother who aborts her child. Jesus Christ offers grace and forgiveness to whoever comes to Him in humility and repentance, no matter how big the mistake.

So, as we stand boldly, uncompromisingly, and with the full conviction of truth and righteousness on our side, let us also stand in grace and love as we minister to those who are considering abortion or have already had one.

May we not give up. May we not be discouraged. May we not water down the truth about abortion. And may we one day see an end to abortion in the United States, by the grace of God.

Posted with permission from David Hoffman

David Hoffman is an evangelist and the director of Kingdom Enterprises, an outreach and evangelism ministry in Tucson, Arizona. His passions are to reach the lost with the gospel of Jesus Christ, ignite a passion for evangelism within the lives of believers and help equip them to live Spirit-filled and Spirit-empowered lives. For more information or to contact him, please go to HisKingdomEnterprises. com or WinTucson.com.