An Atheist started it as a joke, but receives multiple calls sincerely asking for prayer, not to God, but the god of this world system Satan! 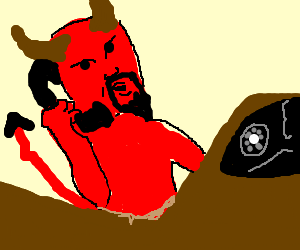 Christian Post – A “Satanic prayer” hotline that was set up in Washington state as somewhat of a joke is reportedly being inundated with lots of calls.

Local intercessors, however, insist it’s better to stay focused on what God is doing, not what the devil is doing.

In a Saturday episode of NPR’s “This American Life” radio program, host Ira Glass recounted the activity of The Satanic Missionary Society, where, like Christian prayer hotlines, callers can phone in and leave voicemail messages requesting prayer.

The satanic prayer hotline, hosted on a blog, was launched by a man in Olympia, Washington, named Chris Allert, who doesn’t believe in God or Satan. Annoyed by Christians who wouldn’t stop evangelizing, he began the prayer line out of curiosity to see who would call. He soon found out people were taking prayers to Satan really seriously and was not sure what to do with that, Glass explained.

Those who call this hotline reportedly have the option to have their messages posted on the internet so others can pray to Satan on their behalf. With almost no publicity, voicemail messages soon started arriving, most of which ended with “Hail Satan.”

“Hello, satanists everywhere. I’m calling to put a hex on the 1230 Club in Olympia, Washington,” one message read, “[b]ecause they start blasting the music really early every night.”

“Please make the 1230 Club go out of business, but make sure everybody that works there goes deaf, like, from playing their music so loud first. Hail Satan,” the prayer request continued.

Another caller asking for satanic prayer requested help to acquire his first-ever job. Yet another called in to complain that he had been robbed and wanted whoever stole his belongings to suffer for it.

A teenage girl, called in with a “sticky situation’; she believed she might be pregnant.

“And I need you guys to pray against the pregnancy. And if there is a baby inside of me, for Satan to kill it. Because I can’t have a baby right now. So I’m turning to Satan, and he is the only answer I have right now. So I’m just overwhelmed. So call me when you get the chance. So thank you so much. Hail Satan, right? OK, thank you. Goodbye,” she said in her message.

Other callers reportedly call in as a joke, or when they are intoxicated.

Note: I would disregard  this pastors comments. His Mentality is WHY Satanism and Witchcraft are on the rise. I would bet he is one of those love everybody Clowns in his seeker sensitive Synagogue of Satan.

If you do not know who the enemy is and how to come against that enemy in Warfare Prayer, you are useless and defeated.

This fool is afraid of Lucifer and his minions and has probably made a pact with him! I will leave you alone if you leave me alone!!!

Patrick Walton, lead pastor at the International House of Prayer NW, headquartered in Federal Way, Washington, is not moved by the satanic prayer hotline, and says the best thing is to stay tuned into God, not getting bogged down in fighting the devil.

“Our simple answer would be, we pray prayers from the Bible, what we call (and many others) apostolic prayers, or prayers that the apostles prayed. We also pray prayers from the Old Testament as well,” he said in an email to The Christian Post on Thursday, when asked how they intercede in light of the overt presence of demonic activity in the region.

Nope, Wrong! DO NOT PRAY PRAYERS from the Bible as this Clown states. That is Catholic Crap! The Lord warns about “Vain Repetitions” and is the same as calling that satanic prayer line!!

Matthew 6:5-8 “And when thou prayest, thou shalt not be as the hypocrites are: for they love to pray standing in the synagogues and in the corners of the streets, that they may be seen of men. Verily I say unto you, They have their reward. 6 But thou, when thou prayest, enter into thy closet, and when thou hast shut thy door, pray to thy Father which is in secret; and thy Father which seeth in secret shall reward thee openly. 7 But when ye pray, use not vain repetitions, as the heathen do: for they think that they shall be heard for their much speaking. 8 Be not ye therefore like unto them: for your Father knoweth what things ye have need of, before ye ask him.”

After these verses he give you the “Model Prayer” that you should use. You do NOT pray that over and over either!

“We see these prayers are Godward in nature, mainly, if not all positive, and not asking for devils to be overthrown, but that God would change people, by way of changing the atmosphere,” he added,

Walton stressed that his comments not be taken as an official statement on behalf of the ministry but is generally “in a nutshell” how they see their prayers and intercession working in their environment.

“We don’t get involved in speaking directly to Satan. We keep our conversation going toward God, and we see this as a biblical pattern.” Read more at the Christian Post

Yep, that is surely a Defeated Church! Neither God nor the Holy Spirit can be found there!