And all of us who support him!

Deuteronomy 18:9-12 “When thou art come into the land which the LORD thy God giveth thee, thou shalt not learn to do after the abominations of those nations. 10 There shall not be found among you anyone that maketh his son or his daughter to pass through the fire, or that useth divination, or an observer of times, or an enchanter, or a witch, 11 Or a charmer, or a consulter with familiar spirits, or a wizard, or a necromancer. 12 For all that do these things are an abomination unto the LORD: and because of these abominations the LORD thy God doth drive them out from before thee.”

Like all their other castings (monthly since he was elected) this one will fail too! See Prophets of Baal WILL fail once again, Trump still President!

Pray this Christian, to combat the Evil Ones in your Daily Prayers.

Father, in the name of Jesus, the Name above ALL names, the Name that every knee will Bow to and every tongue will confess, that Jesus is Lord, and by HIS shed Blood on the Cross. I ask that you nullify, cancel out, make nil and void, every curse, every spell, every incantation, anything that these Hounds of Hell, these disciples of Satan, these worshipers of false gods would try and put on President Trump, his Family and all of those who “abet” him!

In the name of Jesus, we come against the Principalities, Powers, Rulers of Darkness and Spiritual Wickedness in High places that are the driving force behind the disciples of Satan!

Father I ask that you continue the hedge you have around President Trump and those who “abet” him. I ask the same for all True Christians who stand in the gap against these devils, the same hedge you had around your servant Job. Father I do ask that when Satan comes before you and asks to have his way with us, you deny him and send him scurrying!

Father I ask in the name of Jesus, I ask that you send those curses, spells and all other devilish deeds they conjure up BACK to them 100 fold to show them who is in control and who is the Real God. Father, let them fall to their knees in repentance and ask for forgiveness for the Iniquity they are into. In the mighty name of Jesus Christ, AMEN and AMEN!!

As Halloween Approaches, Thousands Of Witches Will Cast A “Binding Spell” On Donald Trump On October 25th 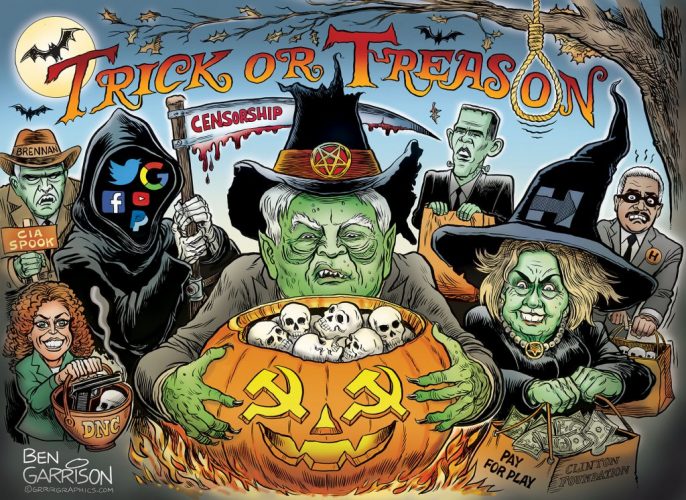 Michael Snyder – I know that the headline will sound very strange to a lot of my readers, but this is actually happening. On October 25th at 11:59 PM, thousands of witches will simultaneously conduct a ritual which is meant to “bind” Donald Trump. Unlike a “curse” or a “hex”, a “binding spell” is not meant to cause harm. Rather, the witches hope to prevent President Trump from doing harm to the United States by his actions, and so they actually believe that they are doing something very positive for the country. But a closer examination of this “binding ritual” reveals some very disturbing details. For example, those participating in the ritual are instructed to call on “demons of the infernal realms” for help in binding Trump…

The ritual calls for the use of an unflattering photo of Trump, a tarot card, a stub of an orange candle, a pin, and a feather. Participants then call on the “heavenly hosts, demons of the infernal realms, and spirits of the ancestors” to bind Trump “so that his malignant works may fail utterly.”

So essentially there are going to be thousands of witches all over the globe seeking to interact directly with demon entities as this ritual is conducted on October 25th.

This kind of stuff is not something that you want to be messing around with.

“Binding spells” have been around since ancient times, and this is what the ritual’s developer has to say about this type of spell…

Binding spells, or defixiones, are some of the oldest in the historical record, and are nearly universal in the world’s magical systems. In this document, binding, which seeks to restrain someone from doing harm, is differentiated from cursing or hexing, which is meant to inflict harm on the target(s). It is understood, in this context, that binding does not generate the potential negative blowback from cursing/hexing/crossing, nor does it harm the caster’s karma.

Witches began casting this type of spell on Donald Trump shortly after he was inaugurated, but now that Halloween is coming up and an impeachment inquiry has been initiated this practice is getting renewed media attention.

According to Vox, at this point there are up to 13,000 witchcraft practitioners that are involved in this movement…

Doucette — which is her married name, not her legal name — is one of the “resistance witches,” an at least 13,000-strong umbrella group of internet neo-pagans, Wiccans, solo practitioners who self-identify as “hedge witches,” longtime magical practitioners in various traditions, and committed activists. They’ve come together each month since Trump’s inauguration with one goal: to perform a spell — equal parts quasi-religious ritual and activist performance — to “bind” the president, forming a collective known as the #MagicResistance.

The spell, a variant on a traditional “binding” spell found in many contemporary neo-pagan and other occult practices, involves channeling energy to limit Trump’s power, “so that he may fail utterly/that he may do no harm.” (Practitioners have the option to add, “You’re fired.”)

Once upon a time, it was very rare to actually come across a real witch in America.

But over the past several decades, interest in witchcraft has absolutely exploded in the United States…

As I explained in my recent article about the dangers of Halloween, one of the primary reasons why witchcraft is growing so fast is because so much has been done to normalize it in this country.

Almost every Halloween, dressing up as a witch is the number one costume for adults in the U.S., and of course it is very popular among kids as well.

In addition, hardcore witchcraft is now commonly found in some of our most popular movies, television shows and video games.

Meanwhile, there is a concerted effort to keep any references to Jesus Christ and Christianity out of the public square as much as possible.

The ancient Druidic festival of the dead known as “Samhain” eventually evolved into the holiday that we now refer to as “ Halloween”, but many witches still use the old name. And if you look on their “wheel of the year”, you will see that Samhain is one of the most important days of the entire year for those involved in witchcraft.

In addition to casting spells on Donald Trump, witches all over the world will be conducting other dark rituals this time of the year. It is a season when they are convinced that the veil between the living and the dead is the thinnest, and so they believe that it is an ideal time to communicate with the spirit realm.

And as I detailed above, on October 25th thousands upon thousands of witches will be enlisting “demons of the infernal realms” to help them in their war against Donald Trump.

We live in a very strange world, and it is definitely getting stranger with each passing day.