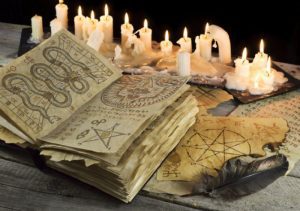 Jennifer Aniston practices a mystical witch doctor–like ritual with a “talking stick” to bring her blessings!

The former Friends actress has gathered for decades with a coven of six of her old pals whenever an important life event takes place — and they form a “goddess circle” by sitting cross-legged on the floor and passing around a beechwood stick that is “decorated with feathers and charms.

The 50-year-old actress held this sacred ritual with her pals before her weddings to Brad Pitt and Justin Theroux, and also in July when her beloved dog, Dolly, died.

Her most recent gathering circle was said to be a celebration of how far she and her friends have come and to bless the next chapter in their lives!

Since becoming single again when she and Justin split in 2018 after less than three years of marriage, Jennifer has also turned her attention to her four-legged friends.

“I’m like a weird dog person, it turns out,” she said. “Like a dog lady!”  Source: National Enquirer

Today we learned that Jennifer Aniston is a beautiful, spiritual being who definitely has some sort of magical powers. The actress just revealed she takes part in “goddess circles” with her A-list friends before major life events, which sounds like magic to us.

In a new interview with The New York Times, the actress admitted she’s been doing this ritual for more than three decades and it involves the women sitting cross-legged on cushions as they pass around a stick decorated with feathers and charms to set their intentions. Interesting, right? Yes, especially because it sounds like a scene we’ve definitely seen on an episode of Friends.

In her profile, Aniston explained that the tradition is a celebration of how far she and her gal pals have come.

She said she performed the ritual before her weddings to Brad Pitt and Justin Theroux, as well as when her friends’ babies were born and when she and Theroux were forced to put down their beloved dog, Dolly, this summer.

However, the “goddess circle” for her 50th birthday was about embracing her age.

Though it’s unclear who partakes in this ritual, it’s safe to assume Aniston’s besties and co-stars, Courteney Cox and Lisa Kudrow, are involved.

After all, the “goddess circle” tradition sounds a lot like that Friends episode, “The One Where Eddie Won’t Go,” in which Monica and Phoebe introduce Rachel to a book called Be Your Own Windkeeper. In one scene, the women discuss how enlightened and powerful they felt after reading it.

See other High Profile Witches in these articles

Official Lutheran Church is really a Coven of Witches