Leviticus 19:31 “Regard not them that have familiar spirits, neither seek after wizards, to be defiled by them: I am the LORD your God.”

Ellie Gardey  | Contributor at Daily Caller –  A church holding membership in the Evangelical Lutheran Church in America, the largest Lutheran denomination in the country, worships God almost exclusively as a woman. The church, Ebenezer Lutheran in San Francisco, also participates in rituals to honor ancient goddesses.

Calling their Sunday service “The Liturgy of the Divine Feminine,” the church uses crystals, animal masks, Reiki healing, Kundali Yoga, and goddess idol-making in their liturgies and events. The church uses names like “Womb,” “Kundalini,” “Sophia,” and “Midwife” to worship God, according to their website.

The Evangelical Lutheran Church in America (ELCA) confirmed to the Daily Caller that Ebenezer Lutheran is an official member of their Church.

“The ELCA has no authority to discipline congregations; that process starts at the synod level,” a spokesperson said.

Ebenezer Lutheran is led by Pastor Stacy Boorn, who has been an ordained Lutheran pastor for 29 years. She is sometimes known as the “priestess of ritual” to the congregation. 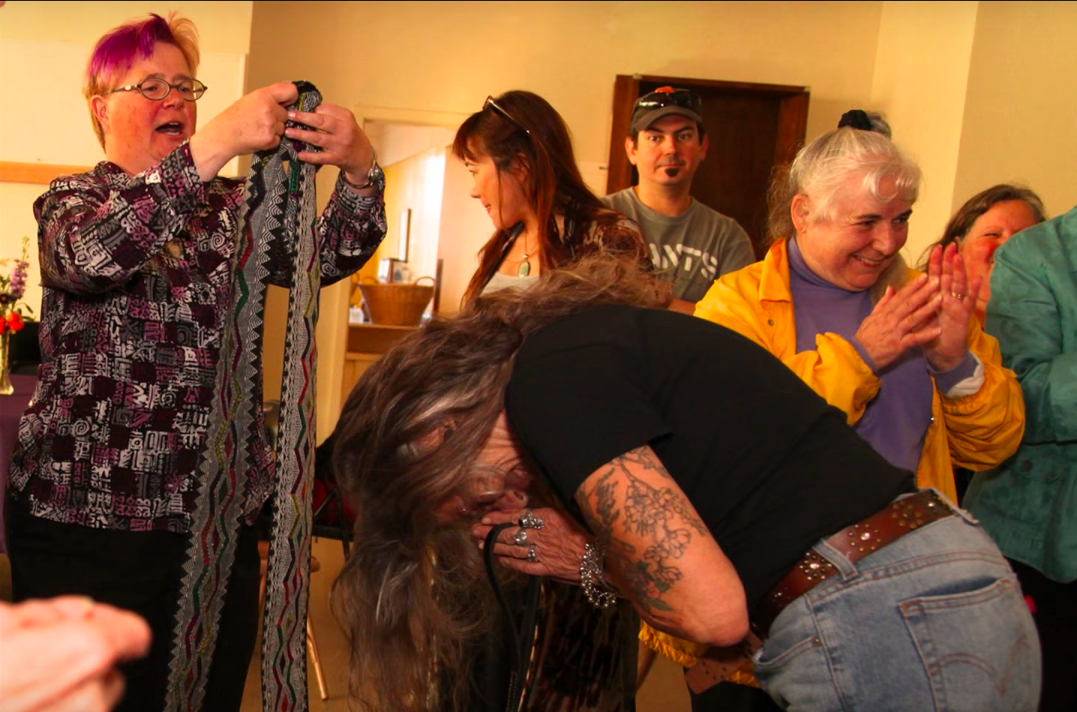 Pastor Stacy Boorn bestows an honor upon the artist of a mural at Ebenezer Lutheran which features: “The Earth Mother, the Black Madonna, the Christ-Sophia, and an androgynous Kali-Kundalini figure.” (YouTube)

Pastor Boorn says her congregation worships God as a woman because there will “never be full equality or justice” for women “as long as the religions of the world continue to personify the Holy Other (God) exclusively or evenly as male.”

Worshiping God “exclusively or evenly as male,” according to Pastor Boorn, can “sustain the various forms of domination that are pursuant of that image.”

Pastor Tom Brock, who led his congregation out of the ELCA after it adopted more liberal stances on abortion and gay clergy, told the Daily Caller Ebenezer’s worship of God as a woman is “arrogant.”

“Jesus taught us ‘Our Father who art in heaven.’ For us to change the Lord’s prayer is arrogant,” Pastor Brock said, adding, “It is arrogant that they think they know better than God.” (RELATED: Newly Consecrated Gay Bishop Declares God Is A Woman)

In February, Ebenezer Lutheran Church held a Sunday liturgy that seemed to worship Inanna, also known as Ishtar, a Mesopotamian goddess. “We honor and celebrate Sister Wisdom who comes to guide us and Inanna,” the church said to advertise the liturgy. The service was described on their website as having an “original Hymn to Inanna” accompanied by a “Sacred Dance,” reports Exposing the ELCA. 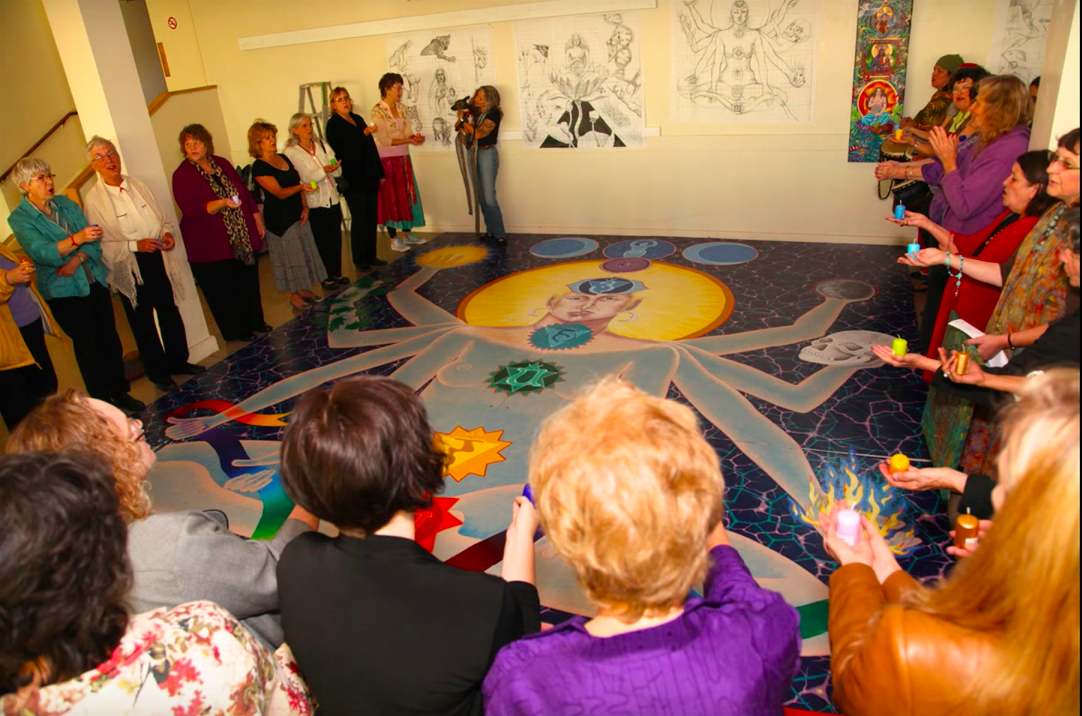 Members of Ebenezer Lutheran gather around a mural depicting “an androgynous Kali-Kundalini figure whose chakras merge with the phases of the moon and the universe.”

The congregation has developed a “Goddess Rosary,” with which they pray on prayer beads every Wednesday night. During the Goddess Rosary, “Tibetan bowls, bells, incense, water, [and] she-icons,” are provided.

Pastor Boorn once led a group of her congregation in making clay figures of the Canaanite goddess Asherah, and provided a picture of Asherah for guidance, reports Ichabod the Glory Has Departed. 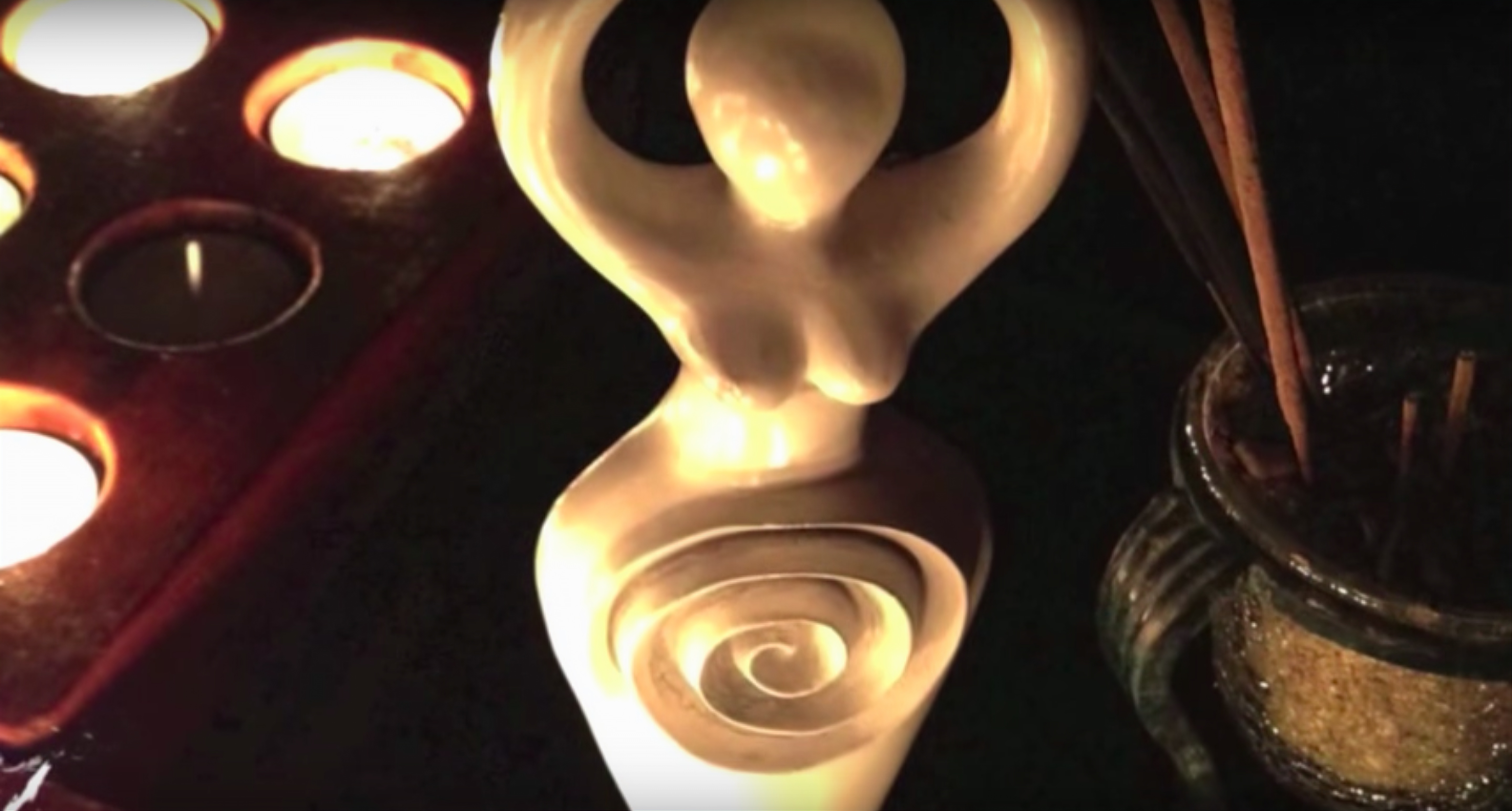 A member of Ebenezer Lutheran who participated in the figure-making said Asherah was selected as one of the “discounted feminine images of God in the Old Testament.”

Pastor Tom Brock told the Daily Caller this “idol-making” goes against scripture: “The Israelites did evil in the eyes of the Lord; they forgot the Lord their God and served the Baals and the Asherahs,” says Judges 3:7.

The website of Ebenezer Church says they derive their traditions from both scripture and “ancient and modern Goddess traditions.”

“The voice of the Divine Feminine is not only being mined in the pages of scriptures and the stories trapped between the lines but also from ancient and modern Goddess traditions,” the Lutheran church says. 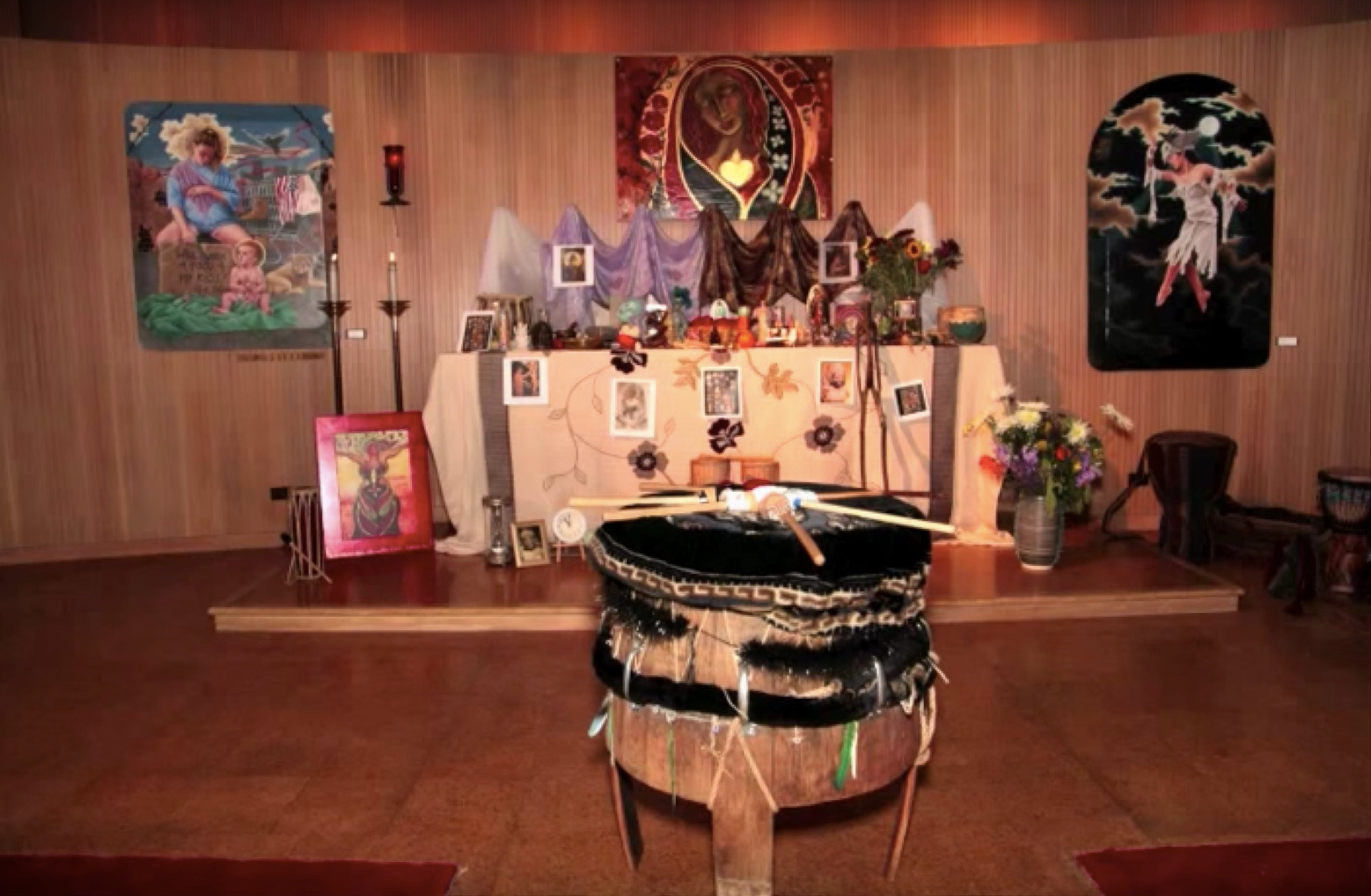 In 2010, the bishop of Iowa, Bishop Michael Burk, looked into concerns that Ebenezer Lutheran was not in line with ELCA teaching, reports Ichabod. After speaking to the bishop overseeing Ebenezer Lutheran, Bishop Burk concluded the preaching at Ebenezer is “decidedly within Lutheran orthodoxy and worship that is familiar and done with integrity.”

Bishop Burk also said there was an acknowledgement by the bishop overseeing Ebenezer Lutheran, Bishop Mark W. Holmerud, that the congregation “pushes around the edges.” 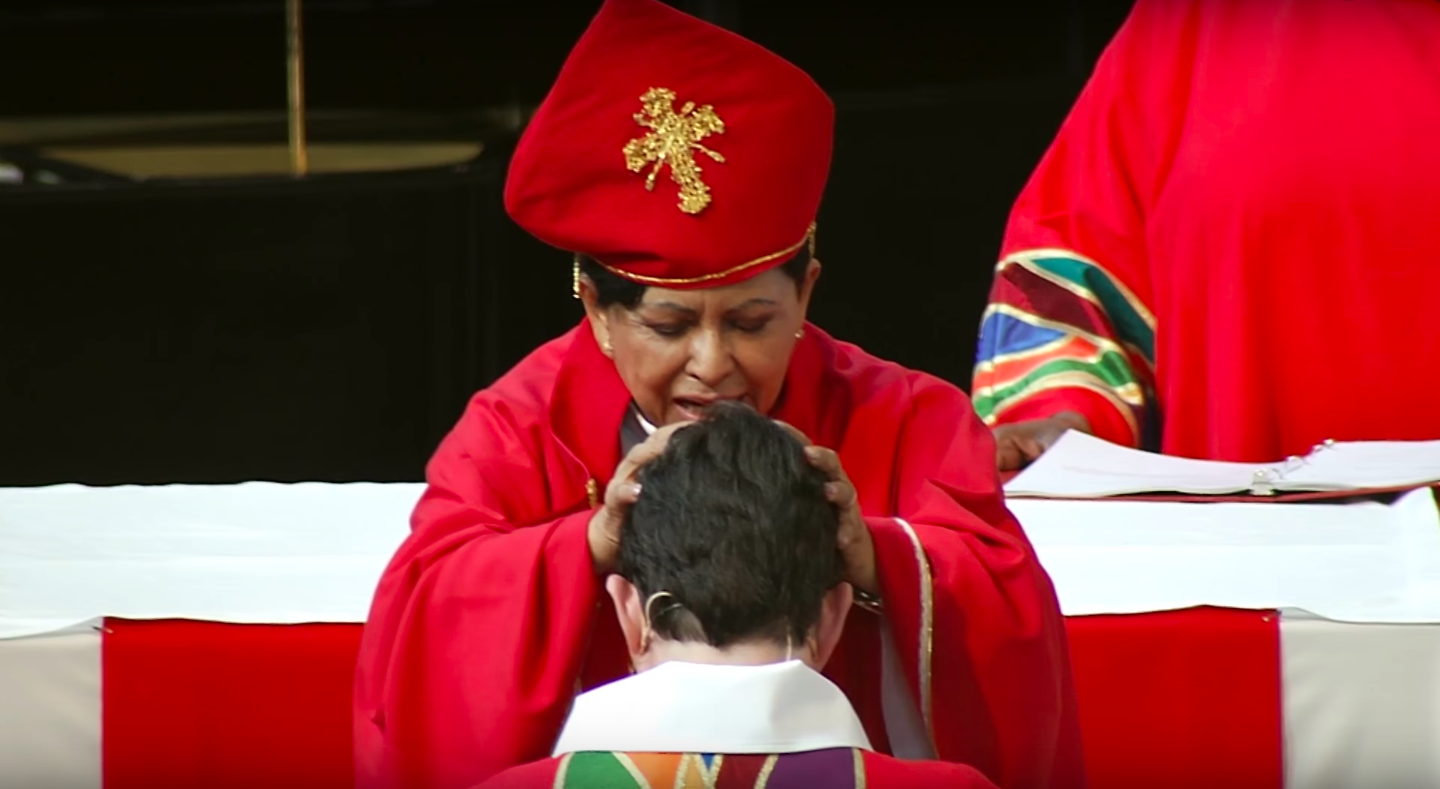 The installation of the Evangelical Church in America Presiding Bishop Elizabeth Eaton in 2013. (YouTube)

Pastor Brock lamented the national ELCA’s policy to not discipline churches, saying “there used to be a culture of discipline in the ELCA.” He said, “The problem is the ELCA has gone so far off the cliff they can’t discipline anyone.”

The Sierra Pacific Synod, which is headed by Bishop Holmerud, confirmed to the Daily Caller Ebenezer Lutheran Church is part of their synod, but declined further comment.

Other rituals and liturgies at Ebenezer Lutheran, which is also known as “Herchurch,” include “Make your own Goddess Totem,” a weekly drumming circle with a “drumming priestess,” and a “Spring Equinox Women’s Ritual” to connect with “animal spirit guides.”