Communist Democrats Beware! A coven of Russian Witches gathered in Moscow recently and summoned Demons to carry YOU

back to Hell where you belong! “The coven called for anyone who wished to hate upon Russia to ‘return to the abyss’ “! 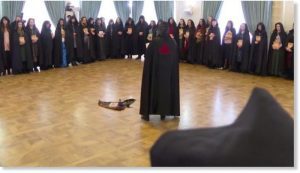 There certainly has been a lot of Hate directed at Russia and Trump coming from the gaggle of fools ever since 2016!

Russia and Vladimir Putin are NOT America’s Enemies. It is the Communist/Socialist Democrats who are the Enemy Within!

“Dozens of witches and seers gathered in the Russian capital Moscow on Tuesday, chanting spells and incantations to protect President Vladimir Putin. The coven called for anyone who wished to hate upon Russia to ‘return to the abyss’ and for Russia to ‘step away from grief and poverty… and open the gates of happiness’. The idea is to improve the quality of life in Russia and in turn make the world better.”

Daily Mail video of the ritual

It is not the “gates of happiness” they are trying to open folks. They are deceived into believing they are casting spells for good, when all along there are opening the gates to the pit where fallen angels and demons reside!!

Daily Mail – A coven of Russian witches and seers formed a ‘circle of power’ on Tuesday to mobilize their supernatural energy in support of President Vladimir Putin.

Dozens of self-proclaimed sorceresses stood side by side to perform the ritual, which they say is one of the coven’s most powerful.

Dressed entirely in hooded black robes, the group read aloud spells and chanted incantations in an effort to support the 66-year-old Russian leader and help him defeat his enemies. Read more here

CNS News – A coven of Russian witches gathered in Moscow on Feb. 5 to perform a “circle of power” ritual to generate supernatural power to aid President Vladimir Putin, reported the Daily Mail.

Based on the video of the ceremony, it looks as if about 70 witches participated in the occult event held in a large room in Moscow. Alyona Polyn, the head of the coven, led the ceremony by reading from a book of spells. As she read, the other witches, dressed in black robes with hoods, listened and then later repeated some what she said.

“We are gathered here to make the world better off through Russia,” said Polyn, after ringing a bell. “We respect our president, and a person of power cannot not respect the existing authority.”

“Russia’s Academy of Sciences estimates that 67 percent of all Russian women have at some time sought help from a ‘psychic or sorcerer,'” reported Bennetts. “The figure for Russian men is one in four.” Read the whole article here

Lunatics like Mad Maxine Waters,  who is the biggest mouthpiece for impeachment amongst the Swamp Creatures in DC, and the Communist/Socialist Democrat party, had best stop her rhetoric about Russian collusion and focus on getting Saved, thereby receiving the protection of the Blood of Jesus Christ against these curses and spells!

Got Questions – The Bible tells us that “like a fluttering sparrow or a darting swallow, an undeserved curse does not come to rest” (Proverbs 26:2b). This means that foolish curses have no effect. God does not allow His children to be cursed. God is sovereign. No one has the power to curse one whom God has decided to bless. God is the only One able to pronounce judgment.

A pause is in order to clarify the above statement. God DOES allow one of his children to endure chastisement.

Hebrews 12:6-9 “For whom the Lord loveth he chasteneth, and scourgeth every son whom he receiveth. 7 If ye endure chastening, God dealeth with you as with sons; for what son is he whom the father chasteneth not? 8 But if ye be without chastisement, whereof all are partakers, then are ye bastards, and not sons. 9 Furthermore, we have had fathers of our flesh which corrected us, and we gave them reverence: shall we not much rather be in subjection unto the Father of spirits, and live?”

God will even ALLOW the enemy Satan to have his way for a season as we see in the Book of Job. No space to get into that here, so I encourage you to read an 11 part series I wrote, Generational, Ancestral and Family Curses. It will explain curses and spells and how to avoid them.

“Spells” in the Bible are always described negatively. Deuteronomy 18:10-11 numbers those who cast spells with those who commit other acts “detestable to the LORD” such as child sacrifice, witchcraft, sorcery, divination, or necromancy (consulting with the dead). Micah 5:12 says that God will destroy witchcraft and those who cast spells. Revelation 18 describes spells as part of the deception that will be used by the antichrist and his “great city of Babylon” (v. 21-24). Though the end-times deception will be so great that even the elect would be deceived if God did not protect us (Matthew 24:24), God will utterly destroy Satan, the antichrist, and all who follow them (Revelation chapters 19-20).

The Christian has been born again as a new person in Jesus Christ (2 Corinthians 5:17), and we are in the constant presence of the Holy Spirit who lives within us and under whose protection we exist (Romans 8:11). We do not need to worry about anyone casting any sort of pagan spell on us. Voodoo, witchcraft, hexes, and curses have no power over us because they come from Satan, and we know that “the one who is in you [Christ] is greater than the one [ Satan] who is in the world” (1 John 4:4). God has overcome him, and we have been freed to worship God without fear (John 8:36). “The Lord is my light and my salvation—whom shall I fear? The Lord is the stronghold of my life—of whom shall I be afraid? ” (Psalm 27:1). Source: Got Questions

I would also guess the Russian Witches are part of the Waning Moon Cursing of President Trump that takes place each month here in America and around the world!  Witches and Pagans gone Loco! Casting Spells and Magick at President and Supporters during Waning Moon!

I say that is backfiring on them as we have seen the manifestation of demons come out of these Democrats. I mean some of the most ludicrous statements and babblings have been spewed since the cursing has begun! Prophets of Baal WILL fail once again, Trump still President!

With the UN-Saved, those NOT Born Again, those who are involved in and practice false religion, these spells and curses do have power.  Curses can have power in the life of a believer if you are practicing sin, which opens the door.

A very good example, of the power of witchcraft, is the recent revelation from Patriots quarterback and 6-time super-bowl champion Tom Brady. He and his Jezebel build altars, chant mantras, rub crystals and wear amulets, in other words, they practice Witchcraft and it works!!  Tom Brady into Witchcraft? Is His Wife Gisele Bundchen a Practicing Witch?

The world is going to hell in a handbasket.  Lawlessness, murder, strife, infidelity, abuses of every kind are out of control.  Why?  Because mankind has turned their back on GOD.  In the midst of this chaos, they are grasping for anything that offers them some semblance of control.  Sadly, they do not realize that the enemy will give them what they want for a season, but it comes at an awful price.