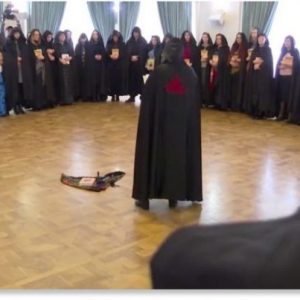 Communist Democrats Beware! A coven of Russian Witches gathered in Moscow recently and summoned Demons to carry YOU  back to Hell where you belong! “The coven called for anyone who wished to hate upon Russia to ‘return to the abyss’ “!  There certainly has been a lot of Hate directed at Russia and Trump coming from … Click Here to Read more

A “ PSYCHIC cat” has been bought by a clairvoyant for an astonishing £66,750 in Russia after spooking its owner, say reports.

Dmitry R claimed his marriage was in jeopardy from the tabby which he inherited from his aunt when she died.

He claimed a clairvoyant – or Siberian “ witch” as she was called by the local media – arrived on his doorstep from her home in Novosibirsk 2,800 miles away, and after examining the cat, decided it had “supernatural” powers, and paid him five million roubles for the animal.