1st Thessalonians 5:22 “Abstain from all appearance of evil.” 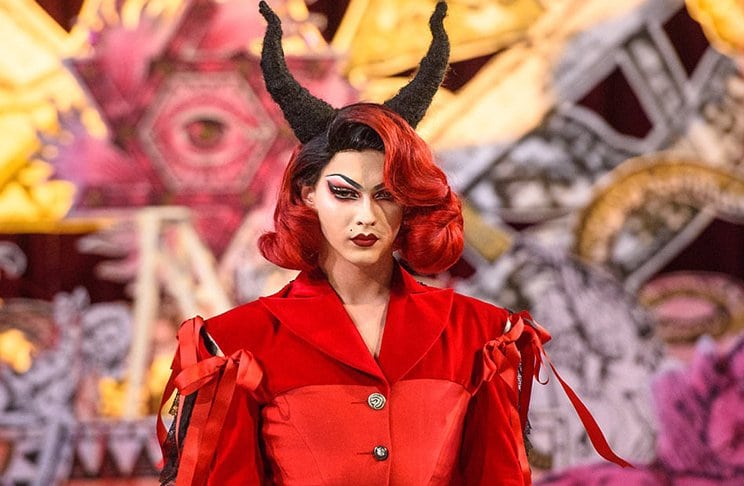 Vigilant Citizen – Turkish designer Dilara Findikoglu’s presented her Spring/Summer 2018 collection at London Fashion Week and it was nothing less than a satanic Black Mass. Indeed, the event took place at the altar of St Andrew Church in London and incorporated heavy occult and satanic symbolism. In short, the event summed up everything the fashion world is truly about.

While Dilara Findikoglu is said to an “up-and-coming rebel of the fashion world”, she’s perfectly in line with the industry’s philosophy. She’s not rebelling at all, she’s doing what exactly the type of stuff “they” want her to do.

For this reason, celebrities such as Rihanna, FKA Twigs, and Grimes wear seen wearing Findikoglu’s creations.

The backdrop is basically a mish-mash of Masonic-inspired imagery. On each side are the Masonic twin pillars. Between the pillars is the letter G inside an inverted pentagram. Underneath it is the all-seeing eye inside a hexagram. There is also the Masonic square and compass in there. To top it off, the runway was a checkerboard pattern. Here’s a classic Masonic painting for comparison.

In this heavily occult context, the models were dressed and arranged with a plethora of symbols. Of course, this had to be combined with the current agenda of androgyny and blurring of the genders.

A sigil is an inscribed or painted symbol considered to have magical power. The term has usually referred the pictorial signature of a demon or other entity and is used in ceremonial magic. The particular sigil on the model’s forehead is strongly reminiscent to the Sigil of Lucifer.

In short, the model is basically a “bride of Satan”.

Historically, a Black Mass is a ritual characterized by the inversion of the Traditional Latin Mass celebrated by the Roman Catholic Church and the desecration of Christian objects for Satanic purposes. The fact that models walk around a Church wearing devil horns recalls the concept of Black Mass.

On the left, is the symbol of the Skull & Bones – the elite secret society.

This fashion show is a perfect representation of the mindset of fashion industry today. It is not simply about “clothing” or “fashion”, it is about ritualistic events, an artistic celebration of the satanic mindset of the occult elite.

As they walk around with magical sigils, occult symbols and other ritualistic props all over their bodies, the models are turned into magically charged objects, turning this “fashion show” – which took place inside a Church – into a satanic ritual with high magical potency.

Posted with Permission from Vigilant Citizen