Leviticus 19:28 “Ye shall not make any cuttings in your flesh for the dead, nor print any marks upon you: I am the LORD.” 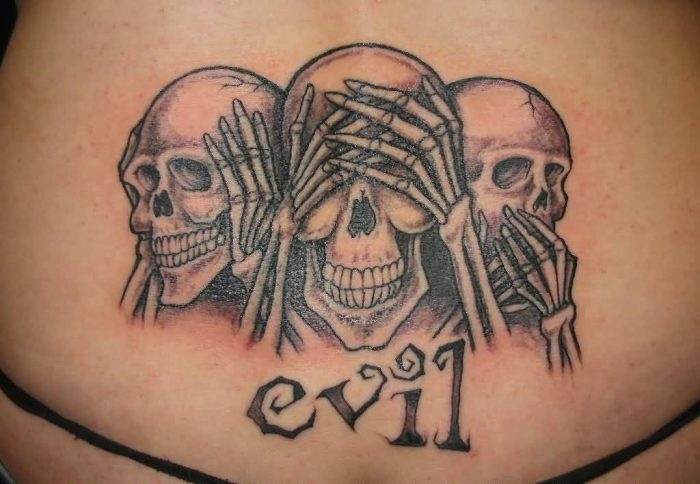 By David J. Stewart – I was recently reading a ridiculous article from the Christian Tattoo Association (Oh Brother!).  The author of the article is a professional tattoo artist, and he strongly attempts to defend his demonic craft with the Word of God.  Despite all his ranting and raving, tattoos are sinful.  The Bible states in Leviticus 19:28, “Ye shall not make any cuttings in your flesh for the dead, nor print any marks upon you: I am the LORD.”  The anonymous author of the article claims that God only condemns tattoos which are placed upon the body to invoke the attention of pagan Gods.  However, tattoos are without question, marks of Satan.  There are several proofs of this fact.

First, what types of people are operating tattoo businesses?  Do you know of any Christ-honoring, Bible-believing churches who are willing to tattoo you?  No.  Tattoo shops are operated by some of the creepiest, weird looking, worldly people on the planet.  Go into any tattoo shop and you’ll likely meet some bald-headed guy with tattoos all over his body, and earrings in both ears.  You’ll likely see nudity in some of the images.  Only a fool would say that God approves of befriending the world, “Ye adulterers and adulteresses, know ye not that the friendship of the world is enmity with God? whosoever therefore will be a friend of the world is the enemy of God” (James 4:4).  Most professed Christians today have the exact OPPOSITE attitude, saying that we need to become more like the world if we are to attract them to Christ.  The Word of God condemns such apostate thinking.  God commands us to SEPARATE from the sinful world (2nd Corinthians 6:14-17), and not to help them by befriending their wickedness.  Tattoos are worldly as can be, and the businesses that sell them are demonic.  The simple fact that tattoos are always obtained from heathen worldly sources proves that they are of the Devil.  There is nothing “Christian” about tattoos!

When you get a tattoo, you are IDENTIFYING yourself with the lost world, because that’s where tattoos originated!!!  Tattoos didn’t originate from the Bible; but from the heathen unsaved world. 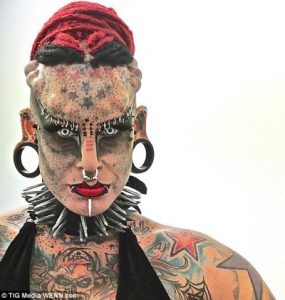 Third, not one Christian in the entire Bible ever received a tattoo.  Not one!  Jesus never wore a tattoo!  None of the Apostles wore tattoos.  How ridiculous and absurd to claim that God approves of tattoos, when Leviticus 19:18 clearly prohibits such demonic practices, “Ye shall not make any cuttings in your flesh for the dead, nor print any marks upon you: I am the LORD.”  Having lived in Chicago for most of my life, and having evangelized to the inner-city for over 20 years, I can assure you that tattoos are marks of Satan.  Tattoos are common amongst criminals, street gangs, and prostitutes.  As I’ve mentioned, I’ve never known a God-fearing Christian to go get a tattoo.  The origin of the tattoo is paganism.

Fourth, tattoos are popular today because of the rock-n-roll idols who wear them.  As seen in the photo above from one of Ozzy Osbourne’s band members, rock-n-roll music and tattoos are synonymous.  You won’t seen any popular heathens carrying God’s Word; but most of them have tattoos!

To allow a tattoo to be imprinted on your body is to defile your flesh with a mark of Satan.  Please consider this important thought … If God wanted us to have marks on our body, He would have put them there.  If God wanted people to smoke cigarettes, then He would have put a chimney on top of our head.  Marks on the body have always been associated with sin and slavery.  It’s crazy!  Satan would love to murder children; but people abort their own children voluntarily.  Satan would love to destroy our health; but people smoke themselves into a wheelchair voluntarily.  Satan would love to place his mark upon us; but people do it voluntarily.  Satan inspires people to destroy themselves, and people are stupid enough to do it.  Frankly, getting a tattoo is stupid.  A lot of people don’t like themselves, and getting a tattoo identifies them with the lowlifes of this world.  In a strange way, it makes them feel accepted.  Many people get tattoos to identify, relate, and find acceptance with the worldly crowd. 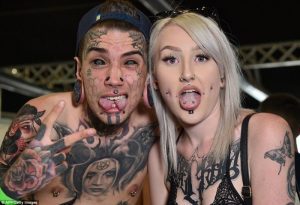 Fifth, what types of images are tattooed on people.  Many of the images are snakes, dragons, grim reapers, naked women, curse words, skulls, and other vile images.  I realize that some people legitimately want a tattoo to remember the death of a loved one, and many of the images are not vulgar; however, the FACT remains that tattoos originated with the wicked.  Our bodies belong to God, and we should not desecrate the sacredness of the body.  The believer’s body is holy, sanctified unto the Lord.  We read in 2nd Corinthians 6:20, “For ye are bought with a price: therefore glorify God in your body, and in your spirit, which are God’s.”  If God approved of marks on the body, then He would have said so in the Bible.  Since the Bible clearly states that it was a heathen practice in Leviticus 19:28 to get a tattoo, we would be sinful and foolish to think otherwise.  The bottom line is that tattoos are far more POPULAR amongst SATAN’S CROWD!

Sixth, where are people getting tattoos?  Many tattoos are nowadays being placed in the genital and private places on the body.  There is a definite sexual connection with the tattoo industry.  In addition, it is wickedness for a male tattoo artist (which most of them are) to look upon a female’s naked body in order to paint a tattoo upon her.  We are living in a sex-perverted generation, where fornication is so commonplace that many men and women have lost respect for their bodies.  This is especially true of women.  Such women are far more likely to commit further whoredom, get tattoos, and live in sexual sin.  The fact that many people are getting tattoos in their private places speaks volumes concerning the nature of tattoos.

Seventh, tattoos are an unwise decision for health reasons.  Here’s some FACTS that the local tattoo shop WON’T dare tell you…

Infection. Even with the use of a new needle, tattooing equipment is still difficult to sterilize. When equipment is not sterile  is used, there is an increased the risk of transmitting bloodborne disease such as hepatitis or HIV. Because of these infection risks, the American Association of Blood Banks requires a one-year wait between getting a tattoo and donating blood.

MRI complications. There have been reports of people with tattoos or permanent makeup who experienced swelling or burning in the affected areas when they underwent magnetic resonance imaging (MRI).

Removal problems. The most common problem with tattoos is costumer dissatisfaction. Despite advances in laser technology, removing a tattoo is a painstaking process, usually involving several treatments and considerable expense. –SOURCE

I just underwent an MRI for herniated disks in my neck.  I sure am glad I don’t have any tattoos.

We are living in apostate times, when Satan is conditioning the masses to receive the coming antichrist.  To no surprise–homosexuals are trying to justify their abominations with the Bible, witches are quoting the teachings of Jesus in an attempt to silence Christians, professed “Christians” are trying to justify Satan’s rock music with the Bible, feminists are promoting godless “ feminist theology,” professed Christians are trying to use the Bible to justify tattoos, etc.  It is disgraceful.  Let us be diligent to expose the evils of tattoos.  No Christian should ever receive a tattoo mark on the body, because tattoos are marks of Satan.  Romans 8:5 states, “For they that are after the flesh do mind the things of the flesh; but they that are after the Spirit the things of the Spirit.”  Tattoos are of the flesh, and of the Devil.  The only people saying otherwise are the Devil’s gang, the worldly crowd.  As the church goes further into apostasy, so will the world continue to redefine God.  It is NO coincidence that fornication, abortion, idolatry, covetousness, feminism, rock-n-roll, witchcraft, lesbianism, and tattoos have become popular in recent decades–this is because of the apostate condition of America’s Christians.  Most of America’s preachers have stopped preaching hard against sin, and have gone the greedy way of Balaam.  Rise up oh Christian!