When you go hunting rabbits, you are usually led down several trails, or at least the rabbit dog is. If it is a really good trained hound, it will stick to just that one rabbit it is chasing.

Then you have some old dogs, like me, that get a smell of something else and get distracted. You may even get off of the original trail and it will lead you on a wild goose chase. That is the case here while trying to figure out the demonic mind of the Highland Park Killer on July 4th 2022.

As more has, and will come to light, remember that Satan and his minions work in darkness…, Acts 26:18 “To open their eyes, and to turn them from darkness to light, and from the power of Satan unto God, that they may receive forgiveness of sins, and inheritance among them which are sanctified by faith that is in me.”

So what is this symbol that the Lunatic killer had on his social media and videos? Why is it relevant?

Well as you will discover, he is a Nazi, he is Antifa, he is a Socialist, and he IS a Satanist!! 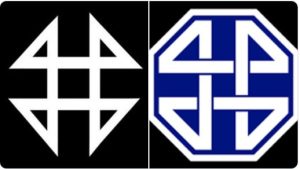 Suomen Sisu has been recently associated with the Highland Park Shooter Robert Crimo and here is why.

Since being detained, Crimo’s many social media accounts—he was active on a number of platforms—have either been deleted or has had their contents removed.

Some Twitter users pointed out how similar the image was to the Suomen Sisu emblem, which the Finnish far-right organization has adopted as its own.

Suomen Sisu is a far-right organization in Finland with the declared mission to “defend Finnish culture, traditions, and nature, as well as to promote the welfare of the Finnish people and the preservation of the Finnish language,” according to their website.

Suomen Sisu creates a community in which Finns can live happily and with pride. They claim that the term should not be translated, but if it is, it literally translates to “Finnish spunk,” “grit,” or “resilience.” Sisu, a major idea in Finnish culture, emphasizes the importance of inner strength.

Short for “supporting nationalist ideals,” Sisu is opposed to “present multiculturalist and cosmopolitan inclinations.” “Fanning the embers of nationalism in everyone,” according to the group.

The Bowen knot, also known as St. John’s arms, has been used in Northern Europe as a lucky charm since before the advent of Christianity, according to the website for Suomen Sisu. A square with looped and rounded corners is the hallmark of the Bowen or looped knot.

Internet sleuths discovered Robert Crimo III, alias Awake the Rapper, had used a similar sign in his social media posts and music videos after Crimo was identified as a person of interest in the Highland Park shooting on Monday.

Until the website underwent a redesign in 2013, according to Varis Verkosto, these reading lists were still available. Suomen Sisu has denied claims that the organization is “Nazi-spirited.” Source

When you go down rabbit holes, sometimes, well most always, you find snakes and other vial critters!

In the Wikipedia entry for  you find this interesting tid-bit: Suomen Sisu was found(ed) by the members of a group called “Thule Society”

So what is the Thule Society and why is it important you may ask?

Let us begin with a quick overview of the Thule Society, beginning with a study of its practices and relevant history.

They were Satanists who practiced Black Magic — this means that they were “solely concerned with raising their consciousness by means of rituals to awareness of evil and nonhuman intelligence’s in the universe; and with achieving means of communication with these intelligences.” (Ravenscroft, p. 161).

Concentrate on that seemingly innocent word, rituals. Christians equate a ritual to a church service, thereby not understanding its occultic meaning. The New Age Dictionary defines ritual as a “ceremony to restore balance with nature…and bring back lost harmony and sacredness.”

Remember we are dealing with the Satanic world, where good is called evil and evil good. (Isaiah 5:20-21) The sacred-ness mentioned here is a Satanic sacredness. Rituals literally are proscribed activities designed to allow demonic power to flow through the participants. These activities are proscribed chants, formula wordings, and carefully planned actions. As we noted last week, the effect is devastatingly powerful, as demonic force pours through the participants, delivering a counterfeit spiritual experience which literally transforms their lives. Never skip over the word ritual, as it is a word of Satanic power.

Thule members practiced a form of Sexual Magic derived from a lodge of which Aleister Crowley was a member. Crowley was recognized as the foremost worshiper of Satan in the 19th Century. “The origin of this…medieval magic…can be traced to a Freemason, Robert Little, who founded the Societas Rosicruciana in 1865… (Ravenscroft, Spear of Destiny, p. 164-5).

Note that Aleister Crowley is perhaps one of the best know Satanists along with Anton Levey, founder of the Church of Satan. He, Crowley,  was dubbed “the Beast” because of his Evil nature!

While the actual sexual perversions which were practiced are too offensive to share, the results are not. Author Revenscroft stated that “indulgence in the most sadistic rituals awakened penetrating vision into the workings of Evil Intelligences and bestowed phenomenal magical powers.” (Ibid. p. 167). This is the Thule Society.

Ravenscroft records its effect upon Hitler, “…sexual perversion took a central place in [Hitler’s] life… a monstrous sexual perversion was the very core of his whole existence, the source of his mediumistic and clairvoyant powers, and the motivation behind every act through which he reaped a sadistic vengeance on humanity.” (Ibid., p. 171).

Eckart‘s final act was to initiate Hitler into, “a monstrous sadistic magic ritual… after which he was sexually impotent. Hitler’s impotency had a deep psychological foundation. He knew sexual fulfillment through the extremes of sadism and masochism…”(Ravenscroft, p. 155, 173).

This impotency delivered a final devastating blow to Hitler’s psychological foundation, finally making him into the sadistic murderer that history knows.

Thule society believed in “communication with a hierarchy of Supermen — The Secret Chiefs of the Third Order”. (Ibid) The quality which make these beings supermen was occultic spirituality. Further, they believed in Madame Blavatsky’s Secret Doctrine, which teaches that certain superman had survived the destruction of Atlantis with their higher levels of consciousness intact. These supermen were Aryans.

These two beliefs combined into one through the Thule Society and Hitler, culminating into the Nazi Death Camps. (Ibid, p. 166). When one group of people incorporate into their spiritual belief structure that they are inherently superior to another group of people, it is inevitable that genocide will be attempted as soon as possible.

The Thule Society regularly held occultic séances, during which time they communicated with demons who were either masquerading as a dead person or who were just appearing as their guiding spirits. Dietrich Eckart, Alfred Rosenberg, and Adolph Hitler invoked the Anti-Christ into manifestation at the mediumistic séances of the Thule Group in Munich. (Ravenscroft, Spear of Destiny, p. 168)

Eckert believed he had been told by his guiding spirit he would have the privilege of training the coming Great One, the Anti-Christ. From the beginning of their association, Eckert believed Hitler was Anti-Christ. Therefore, Eckert spared no occultic knowledge, ritual, or perversion in his attempt to fully equip Hitler for the role. Once the training was completed, Hitler believed he was, “born anew with that super-personal strength and resolution he would need to fulfill the mandate … ordained for him.” (p. Ravenscroft, p. 93-4)

Hitler literally equated this with the Christian claim to be born again.

Source See more about the Skull and Bones connection as well as other demonic stuff there.