At least Mozambique is trying to do something!

1st Peter 5:8 “Be sober, be vigilant; because your adversary the devil, as a roaring lion, walketh about, seeking whom he may devour:” 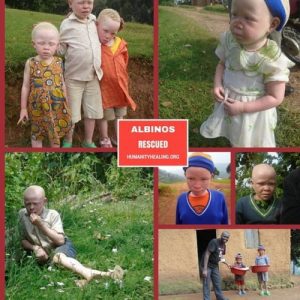 But if these people think that by passing a law to protect the Albino’s will cause the disciples of Satan to stop killing them, they are sadly mistaken! It is no different than laws being passed protecting Elephants, Rino’s, or any other animal that poaches try and get their hands on to make money.

It is a spiritual problem—one of greed and superstition that drives the morally depraved to do such things. The bottom line is—there is a devil loose—and until peoples demonic religious practices are destroyed by the True Gospel of Jesus Christ—and Satan along with his followers are cast into Hell, this will continue.

1st John 3:8 “He that committeth sin is of the devil; for the devil sinneth from the beginning. For this purpose the Son of God was manifested, that he might destroy the works of the devil.”

Also read this: Along with the Rise of Witchcraft, Black Magic and Satanism, an increase of Child Abuse and Child Sacrifice naturally follows!

Frances Martel | Breitbart News – The government of Mozambique launched a new conference and training session initiative in partnership with an albino rights NGO Wednesday urging citizens to cease killing, raping, and using the body parts of people with albinism in witchcraft ceremonies.

In many parts of southeastern Africa, “traditional herbalists” who practice witchcraft spread the belief that people with albinism possess magical powers. Albinism is a condition in which a person’s body does not produce pigmentation, often leaving them more sensitive to sun exposure and other risks. Many in the region hold the common belief that potions featuring the body parts of an albino person can bring good luck, help in business, win political elections, and cure diseases. Relatedly, some believe that sex with an albino woman can cure HIV/AIDS, resulting in frequent instances of rape of albino girls and women.

Witch doctor demands for albino body parts make harvesting them by killing or dismembering an albino person a lucrative business.

Deputy Minister of Gender, Child, and Social Action Lucas Mangrasse attended a conference on albinism Wednesday alongside the organization Amor a Vida (love of life), which advocates for albino rights, speaking on behalf of the executive government in condemning violent acts against albino people. The organization demanded “urgent measures” to punish attacks on albinos and prevent further violence, in the hope of achieving a 2020 with no attacks on albinos on record.

Joining Mangrasse in solidarity with the albino community was Supreme Court President Adelino Muchanga, who demanded the legislature pass tougher laws against trafficking albino body parts in remarks on Monday. Muchanga made the remarks during a visit to the city of Quelimane, which recently suffered yet another atack. The victim in this case was a nine-year-old albino boy.

Since when have Criminals followed laws? They are of their father the devil!

The boy, whose identity remains unknown, was kidnapped and later found dead, missing his heart, genitals, eyes, arms, and feet. Authorities said the body showed signs of refrigeration, indicating that the murderers were preserving the body to sell to a willing buyer.

“The case of the murder of a boy in Quelimane is lamentable,” Muchanga said on Monday. “Unfortunately, it’s not an isolated case, since cases of the kind are reported from across the country. Our commitment, as courts, is to apply measures that discourage this sort of practice.”

Albino boy murdered and brain harvested for Witchcraft in Mozambique

It is not just Albino’s that are targeted, and not just in the countries of Africa. Other, shall I say “anomalies”, that are evident in people or animals, are highly sought after by these hounds of Hell!

Here is a first hand testimony that I personally know to be fact about these Voodoo and Witch doctor practitioners.

In my wife’s ex-in-laws family they had a child who was born with one green eye and one blue eye. They had went on vacation to New Orleans Louisiana when he was about six years old. While there they were walking the streets taking in the sights and minding their own business

BTW, New Orleans is a haven of African and Caribbean Witchcraft and Voodoo. As they were walking past one of the many voodoo shops that are there, a Big Fat Black Witch was standing outside trying to coax people to come in and get a fortune told or some other crap they peddle out.

When she saw the boy she heaped praise on him and the parents and tried desperately to get them to come in. She went as  far as to block the sidewalk and hindered them from proceeding on their way.

Here is the shocking part. She told them that there was special magic that could be performed with him and that they could make a lot of money using him in that way. Being some what religious, they declined her suggestion.  She then asked the parents if the would SELL the boy to her!

Folks, this was not in a third world country nor a backwards remote island. It was right here in the civilized United States of America!!