There is editing, links and additions from the original by Amanda Harding | Daily Wire

Cabbage Patch Dolls, Furbies, Tickle Me Elmo … each year has its hot holiday toy list, which inevitably features one item that’s impossible to get even without supply chain issues. There are a couple of hot ticket items for Christmas 2021, but one magical-themed toy stands out from the rest.

The Magic Mixies Magical Misting Cauldron is essentially a stuffed animal with a gimmick attached. Promotional copy encourages kids to “mix your potion and make your pet!” This interactive toy comes with a plastic cauldron, “magical” ingredients, and a book of spells that help children “create” their stuffed animal from scratch.

1st Thessalonians 5:22 “Abstain from all appearance of evil.” 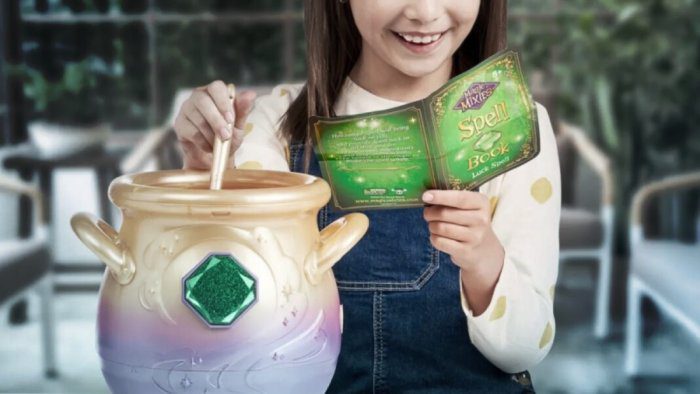 The Amazon instructions for the Magic Mixies say, “Follow the spell by adding the magical ingredients to your Cauldron one step at a time, waiting for the green light and tapping 3 times…when the potion is finished watch as REAL MIST begins to rise from the Cauldron.” A new stuffed animal emerges from the mist in the pot.

Once that spell-casting is complete, kids can “make real Magic happen again and again” by reloading Magic Mixies back into the cauldron to show their friends, or they can make up their own spells using the “Spell Mode” of play. The item is selling out nationwide, with re-sellers offering Magic Mixies for exorbitant prices days before the Christmas holiday.

Pretend magic is nothing new. But this toy comes when there’s been an increased push to advertise occult entertainment to children in particular. The Disney cartoon “The Owl House” depicts a young girl serving as a witch’s apprentice and learning to become one herself. The series, which received accolades for LGBTQ+ representation, was just canceled in late 2021.

Occult-themed entertainment for their children is so common it’s almost easy to miss. Movies like “Harry Potter” glamorize wizardry and witchcraft, so it’s not too shocking to find toy cauldrons that “magically” create cute stuffed animal toys.

And witchcraft as a whole is growing in popularity among all age brackets, especially in the past five years. Daily Wire reported that the number of people who identify as witches outnumber those who are Presbyterians, according to a 2018 poll. These numbers grew throughout Trump’s presidency and represent the quest for young adults to find deeper meaning in their lives outside of organized religion.

“As Christianity declines across the country, paganism has swung to the mainstream, with witchcraft paraphernalia for sale on every high street and practices normalized across popular culture,” the Telegraph reported. This has led to a booming $2 billion dollar industry that’s full of everything from tarot cards to crystals.

“Whether it be spell-casting, tarot, astrology, meditation and trance, or herbalism, these traditions offer tangible ways for people to enact change in their lives,” a Brooklyn-based metaphysical boutique owner said. “For a generation that grew up in a world of big industry, environmental destruction, large and oppressive governments, and toxic social structures, all of which seem too big to change, this can be incredibly attractive.”