A HINDU priest has beheaded a man in a human sacrifice at an Indian temple in an apparent bid to end the coronavirus pandemicSansari Ojha, 72, was said to be both drunk and high from smoking marijuana when he decapitated a man with an axe to appease a goddess. 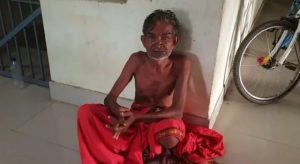 Ojha cut off 52-year-old Saroj Kumar Pradhan’s head in the shrine of the Brahmani Devi Temple under Narasinghpur police station in Cuttack.The brutal attack was reported to have taken place around 1am in the morning after an intoxicated argument between the pair.
Detective Ashish Kumar Singh said the priest was heavily drunk at the time and surrendered to police that day after appearing “mentally unstable”.

He said Ojha claimed he was ordered by a goddess who came to him in a dream to sacrifice a human in order to bring an end to the coronavirus pandemic currently sweeping the globe. Source: The Sun. Read more here