As America Burns We Are Witnessing An Increase of Satanic Activity – From COVID-19 To The Politics Of Destruction, We See Evil Snowballing Across The Nation 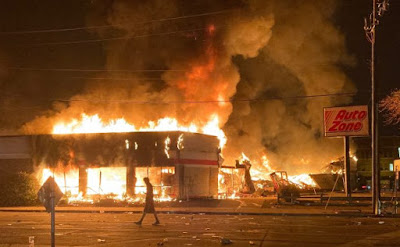 We are noting a number of events happening simultaneously, from the COVID-19 lockdowns and the violation of constitutional rights still continuing, to the aftermath of the death by police of  George Floyd, which has caused rioters to burn the city of Minneapolis in protest, we are seeing a variety of different things occurring all at the same time, which to some, indicate an “increase of satanic activity,” as was expressed to me recently via email from a reader.

We won’t post the entire email because they are confidential unless specifically given permission to share, but that one sentence stated “A number of Christian leaders ( not necessarily preachers) have commented on the increased of satanic activity.”

That is not the first time over the past few months that we have heard that sentiment expressed. Lately we are hearing it much more often.

As politicians in Democrat run states continue to trample on the constitutional rights of Americans in the name of “safety” over the spread of COVID-19, we see blue-checked, verified, liberal social media users pushing for more violations of rights, as they are also actively encouraging and inciting more rioting and destruction in Minneapolis by groups such as Black Lives Matter and the Democrat Socialists of America. 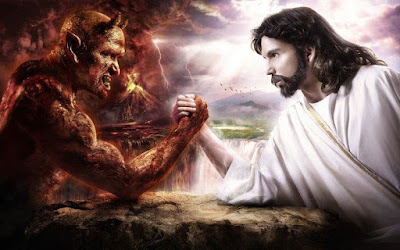 As joblessness rises to unprecedented numbers caused by politicians that deemed themselves the arbiters of what type of businesses are “essential” and what is “non-essential,” during a pandemic, forcing tens of millions of people to become jobless, without money to pay their rent, utilities, and in many cases not even food for their tables, we note the slowness of some state leaders to attempt to “reopen” their states so that the economic destruction already witnessed doesn’t get even worse.

Not only are some Democrat politicians delaying a full opening, but some, such as “that woman” from Michigan aka Governor Gretchen Whitmer (dubbed wHitler), has actually extended her lockdown order, which some judges in a variety of states have already indicated is unconstitutional, until June 12, 2020.

On social media the satan worshippers, otherwise known as liberal celebrities, are busy preaching to Americans about how it is the responsible thing to do for the state leaders to keep their states on lockdown.

Of course those blue-checked, verified celebrities are doing this from their million dollar homes, stocked with any food they want, while millions of Americans are being forced to go to food banks, wait in long lines, just to get food for their childrens’ table.

But ever since her paychecks stopped, Hayes and her mom have started eating less and rationing food to make what they get from the local food bank go further.

“Oh, my God, I’m so afraid,” she said. “For my income just to stop, and having to depend on people, it’s very scary.”

Just two months into the COVID-19 pandemic, 44% of Americans are afraid they won’t be able to afford food, the latest Marketplace-Edison Research Poll found. The numbers are even higher for those making less than $50,000, for gig workers and for those who are temporarily unemployed.

“That high of a percentage of people being afraid that they can’t afford groceries does not surprise me at all,” said Lisa Scales, president and CEO of the Greater Pittsburgh Community Food Bank.

For those who missed the “Thanks Celebrities” video below, from people that truly understand just how narcissistic these obnoxious celebrities have been during this crisis, watch below:

(PLEASE HELP SUPPORT ANP: With Independent Media being censored on almost every internet platform, reader donations are what keeps websites like ANP up and running. Your donations are greatly appreciated. Thank you, Stefan & Susan.)

One seriously has to wonder if these tone-deaf celebrities and liberals are as evil as they are acting….which brings us to the riots in Minneapolis and how those social media liberals are actually inciting the rioters to “burn it down,” which as we will show below, they are already doing. 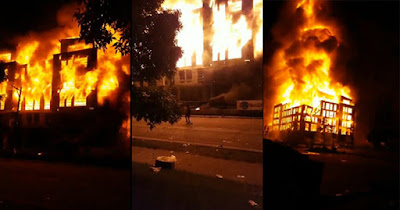 As the images above as well as the video at the end of the articles shows, much of Minneapolis is on fire and rioters have started burning businesses in their own town, threatening to take their riots to the suburbs, after the death of George Floyd, an African America, by law enforcement.

Over on social media, blue checked, verified liberals are busy encouraging the mass destruction as well as violence against all law enforcement.

Of course there is no way now to see if she has deleted the tweet after so many have taken note, because after it was noticed by a number of others, she conveniently locked her account, making sure that only her followers could see her content. 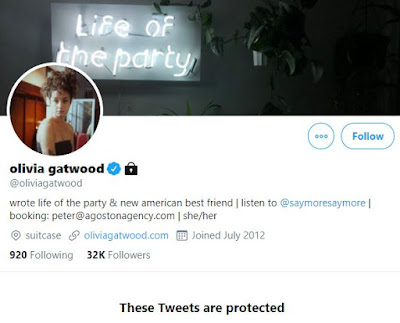 Then we have the daughter of the America hating Democrat Congress woman  Ilhan Omar’s retweeting a message from The Twin Cities DSA (Democrat[ic] Socialists of America) asking for supplies for the “comrades protesting at the 3rd precinct” in Minneapolis. 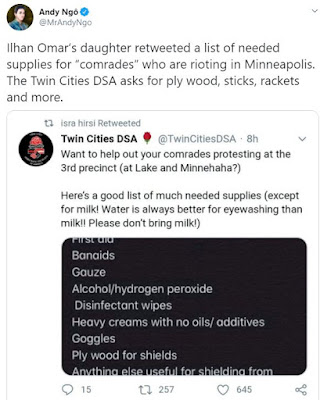 When I saw that I thought that something about that location sounded familiar…. well it was.

I had just read about how the police at the 3rd Precinct were forced to abandon the precinct by protesters. The exact moment they abandoned the precinct was caught on camera, and shared by Townhall’s Julio Rosas, seen at the link above.

Below is a news segment about it.

These evil people, in the media, celebrities and simply social media liberals, have politicized this so badly that now riots and protests and destruction to public property has spread to other states.

There is no doubt they, willingly or witlessly, are trying to bring a race war to a head, which would automatically lead to a civil war.

Related: CARNAGE ACROSS AMERICA Driver ‘ploughs into George Floyd protesters’ and police station set ABLAZE on third night of fury across US 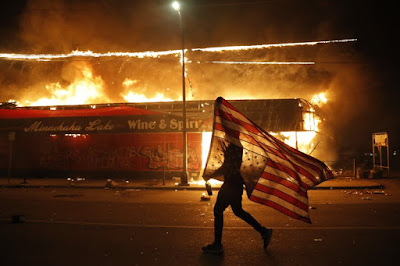 In the meantime, in blatant attempt to interfere in the 2020 elections, social media platform Twitter has decided to politicize the riots by labeling President Trumps tweet explaining that he will send the Military in to bring the rioters under control if the the elected state leaders (Democrats) don’t stop the violence, chaos and destruction, as a violation of Twitter’s guidelines.

The President’s two tweets stated “I can’t stand back & watch this happen to a great American City, Minneapolis. A total lack of leadership. Either the very weak Radical Left Mayor, Jacob Frey, get his act together and bring the City under control, or I will send in the National Guard & get the job done right………These THUGS are dishonoring the memory of George Floyd, and I won’t let that happen. Just spoke to Governor Tim Walz and told him that the Military is with him all the way. Any difficulty and we will assume control but, when the looting starts, the shooting starts. Thank you!

Twitter then claimed that Trump’s warning was “glorifying violence.”

As an aside, President Trump recently signed an Executive Order which deals with the liberal bias and censorship of conservatives on social media.

These people do not care if their actions cause more tensions, blood and violence……because they are evil and evil is snowballing all across the nation.

What I have touched on above is just the tip of the iceberg.

Just browse through the news, on Liberty Daily, WhatFinger, Memeorandum, Drudge or any other aggregator of your choice, and look at the sheer number of stories that are indicative of a world gone mad, evil increasing exponentially.

The chatter we have seen shows that many are seeing exactly what our ANP emailer said, “increased of satanic activity.”

God Bless and stay free everyone.