Yes. you read that right. Ole Doc Kellogg came up with the idea and tested it out on sick and mental patients in a Sanitarium he worked in. But there is more to the sordid antics of the Klueless Kellogg Klan! Oh and did you know the ole Tony the Tiger has gone Queer? See a list of Manufactures, Retailers and Super Hero’s who have come out of the closet!

Excerpts are from Breitbart News who Kellogg’s withdrawn advertising from! 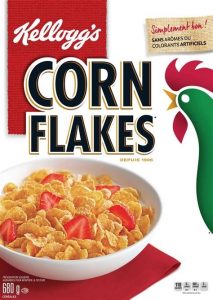 A Michigan physician named John Harvey Kellogg came up with Corn Flakes while searching for a cure for auto-eroticism, (I had to look it up too) believing that flavorful or seasoned foods increased sexual desire, while bland, tasteless food could curb it. (Is this why food in hospitals, schools and prisons is crap? To keep people from becoming sexually aroused?) “While working as chief physician at Michigan’s Battle Creek Sanitarium, (Battle Creek is where the headquarters of Kellogg’s is located) Kellogg developed a few different eating ideas for the patients, which he denoted as “healthy, ready-to-eat anti-masturbatory morning meals.” (Note the preceding link is from mentalfloss.com which apparently deals with mental health. Is a picture starting to come visible in your mind?)

“Described as a “fanatically religious” Seventh Day Adventist, Kellogg believed that all sex was evil and never even consummated his own marriage, sleeping in a separate bedroom from his wife and adopting all their children. “If illicit commerce of the sexes is a heinous sin,” Kellogg wrote, “self-pollution is a crime doubly abominable.”

Now here is where Religion goes off the straight and narrow Gospel tracks. The Bible does not say Sex is Evil as he believed. It is an abomination when engaged in outside of marriage and was to only be in the marriage bed. Hebrews 13:4 “Marriage is honourable in all, and the bed undefiled: but whoremongers and adulterers God will judge.” All other Sex is called Fornication,  See many more Scriptures on the marriage bed and Fornication here.

Where did he get the wacky idea Sex was evil? Perhaps 1st Corinthians 7:1 “Now concerning the things whereof ye wrote unto me: It is good for a man not to touch a woman.” Maybe he was a closeted Homosexual and just got married to hide his perversion. That also may be why he was looking for a cure for masturbation. That is what I have come to believe because I am sure he read the very next verse that Paul wrote: V2 “Nevertheless, to avoid fornication, let every man have his own wife, and let every woman have her own husband.” This left his wife to suffer with desire……., unless she was a Lesbian! Back in 1894 the year Kellogg created Corn Flakes, if you were a Queer and were found out, things did not go to well for you like they do today! There are some marriage arrangements that have taken place then, and  even in this Liberal, Progressive and Trendy times we live in!

“Seeing the success of Corn Flakes at the sanitarium, Kellogg partnered with his brother Will, the institution’s bookkeeper, to produce the cereal for sale to the general public. Will believed that the product would sell better if sugar were added to the flakes to make them more palatable, but John rejected the idea. Will eventually started selling his brother’s cereals through his own business, which became the Kellogg Company.”

Well, they added sugar that reeks havoc with the immune system, makes kids hyper active bouncing off walls and the cause of Diabetes! (A Doctor should have known that). Hence Tony the Tiger was born, and we now have the slogan “They’re Great”! Ole Tony has gone Queer which has “reflected the family values” the Kellogg’s believes in. We can discern more of what these devils believe from the people they associate with.

Working in a sanitarium seems to have prepared Doc Kellogg for the kind of people he and his family would be involved with in the future. A sanitarium is not only a place for the sick, but a place for wacko’s, nut cases…. demon possessed people who have gone off their rocker. the INSANE! The same can be said for the Democratic party, It is full of wacko nut jobs. We have seen much evidence of this during the past election cycle and the nut jobs keep getting worse, not better, in the Democrat Insane Asylum.

“In June of 1930, Will Kellogg also founded the non-profit W.K. Kellogg Foundation, which has grown into the seventh-largest philanthropic foundation in the United States.In recent years, the foundation has embraced some of the most extreme elements of left-wing partisan politics, with close ties to radical anti-American billionaire George Soros. In its push for a far-left political agenda, the foundation has given major donations to Soros’ Open Society Institute, as well as his Tides Center.

“Last November, Kellogg announced that it would no longer advertise on the Breitbart News site, kowtowing to what the New York Post called “a concerted effort on social media that calls on companies to cease advertising on the site.” To justify its attack against Breitbart, Kellogg’s spokesman Kris Charles said Breitbart News and its tens of millions of readers “aren’t aligned with” the cereal maker’s “values as a company.”

Just what are the values of Kellogg’s? Even though he has no Biological children of his own to hand down HIS Sin Nature, ole Doc Kellogg has instilled his perverted views of Sex, which has driven his family into the perverted hands of the Satanic Controlled Democratic Party. As the old saying goes, “Birds of a Feather Flock together”!