That is because of all the Witchcraft, Satanism, Voodoo, Santeria, Animal and Human Sacrifice, Organized Crime, Drugs, Prostitution and Catholicism that is rampant.

Look for Hellywood and San Francisco in the Sodomy State to be next! 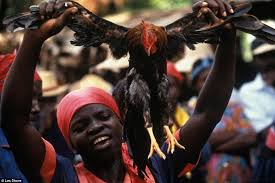 New York is just as evil, but the Voodoo is not as prevalent there. And like New York, they have a Communist Democrat Governor and Mayor!

That stupid Woman, the Mayor, let Mardi-Gras go ahead KNOWING that the virus was in the states. She then blamed the President, saying he should have warned them! New Orleans Mayor Blames Trump, Federal Government For Her Decision To Hold Mardi-Gras

Also read why Italy is a hot spot! Chinese Wuhan Coronavirus Rampant in Italy – Why?

As Louisiana becomes a growing hot spot, governor says an unhealthy population is more vulnerable; statistics may change as more are tested

WSJ – The coronavirus is killing residents in southeast Louisiana at higher rates than in other parts of the U.S., a new analysis shows, adding urgency to efforts to slow its spread through an already unhealthy population.

Two Louisiana parishes, the state’s equivalent of counties, have the most virus-related deaths per capita nationwide, according to Gary Wagner, an economics professor at the University of Louisiana at Lafayette who is tracking the epidemic for the state. St. John the Baptist Parish has the highest rate, followed by nearby Orleans Parish, which encompasses New Orleans.

Statewide, Louisiana is second only to New York state in per-capita deaths. Mr. Wagner’s analysis is based on data compiled by Johns Hopkins University and is limited to counties with at least five deaths.

Gov. John Bel Edwards said a key challenge for Louisiana is its residents are generally sicker than Americans overall, with high levels of obesity, diabetes, hypertension, heart disease and kidney disease. The state ranked No. 49 in the United Health Foundation’s 2019 state-by-state health assessment.

“We have more than our fair share of people who have the comorbidities that make them especially vulnerable,” said Mr. Edwards, a Democrat. Read more at the Wall Street Journal