What was the Luciferian Spirit Cooker John Podesta doing in New Zealand?

As this article points out, why did Podesta say that New Zealand is a “big juicy target.” ? 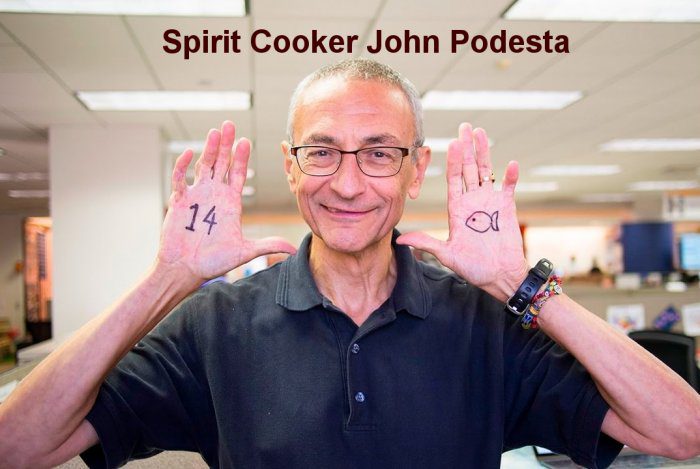 Note the 14 and the Fish symbol on his hands.

On this theme, the drawing of this code on his palms speak to me of the phoenix palm. It’s a symbol of victory over death, as in how Isis raised dead Osiris into her son Horus, after magically fashioning a phallus to replace the one that had been eaten by the fish. In a parallel legend, Apollo (akin to Horus) was born to Leto as she clung to the phoenix palm on the magickal isle of Delos.

With his hands in that position, John is signaling a squared circle, framing his round face as inside a square. The grid of ceiling tiles completes the square. This form is linked to Freemasonry (squaring the circle as an adept with a square and compass) but this is really a sign of the act of sodomy, a ritual act through which he was very likely illumined and initiated into the ancient sun cult. Source: Open Scroll

Also note his hands are all scared up from blood letting in his Satanic Rituals!

Consider these two quotes now that we have established Podesta’s connection to the Occult and Lucifer.

A number of patriot writers have noticed over the years that the New World Order (NWO) elites often tell us exactly what they are up to, and the suspicion is that they do this for magical, ritualistic reasons. The idea is that they (and their ultimate master) are very legalistic and feel that they can get away with anything if they tell us what they are about to do to us, and we, by not protesting in mass and even resisting, are, in effect, agreeing to it.

Or, alternatively, they are taunting the minority of us who are awake and aware, secure in their knowledge that the great mass of people, dumbed down by the indoc centers (formerly known as “schools”) will pay no attention. Of course, what they say openly is only published in a very few outlets; for the most part the slimestream media will ignore it. David Rockefeller, who now resides down under (I don’t mean Australia), openly boasted of the elite’s intention to create a global dictatorship. Read it all here

And then there is this quote by the Criminal Rahm Emanuel

“You never let a serious crisis go to waste. And what I mean by that it’s an opportunity to do things you think you could not do before.” – Rahm Emanuel

I have that quote in many articles I have written, but none is more apropos than the one in relation to the False Flag Las Vegas Massacre.

What happens when you Whack a Hornets with a Stick?

I spent 1/3 of my early years on a dairy farm where I had ample opportunities to learn a thing or two about bee hives. I ran into many a hornets nest while mending fences. I learned really fast just what happens when you take up a stick and give a hive a whack!

A small part of an ENORMOUS hornet’s nest was uncovered when President Trump, then Candidate Trump announced he was running on the GOP ticket. Candidate Trump spent the primaries whacking a stick at one side (supposedly the friendly side), of that HUGE nest. His efforts exposed some rather large hornets and as a result he got stung a bit. When he was declared the winner of the nomination, that nest got really stirred up and even more hornets came out. Fired up and buzzing like crazy!

Trump’s whacking away at the nest during his campaign really stirred up the evil insects inside. Winning the election, was the equivalent to failing to run away to avoid getting stung. Now the whole nest of nasty’s smell the Pheromones that were released by the Clinton/Bush/Obama/Soros Cabal! The WHOLE SWARM is now out to get him, and those of us who support him!

The Vegas Massacre is a result of stirring up that Globalist Cabal bees nest!  Please bare with me and consider this.

The Nuts do not Fall far from the Tree

MK Ultra, CIA and other shadow government devils know who the NUTS are. They harvest (recruit) them, condition them, and then release them when needed!

More is coming to light about the Mass Murder as the hours and days go by. This massacre has the smell of a false flag by the aforementioned devils! Read the rest here

BTW, why are we not hearing the talking heads reference this along with New Zealand? Could it be it is because it has been found that Vegas WAS a Muslim attack… which they are keeping hush hush?

Did they dispatch Podesta and his Luciferian Spirit Cooking entourage to Christchurch to oversee and conjure up the Principalities, Powers, Rulers of Darkness and Spiritual Wickedness in High places? All of their false flags here in America do not work to their advantage in gun confiscation, so try it from another country and name people to get a race war going!

So now they are whacking at the Muslim nest trying to stir them up. You mark my words,  there will be an attack here in America in retaliation for what happened in Christchurch!

What was John Podesta doing in New Zealand until the day before the Mosque Shootings?

Leo Zagami – I would like to outline oddities that I have noticed in connection to the recent New Zealand terror attack and the presence of John Podesta until 24 hours before the tragic event. Only seven days earlier, Hillary Clinton’s former presidential campaign manager was in New Zealand where he appeared in a T.V. interview conducted by Newshub, as the victim of “The world’s most notorious political hack.” At the end of the interview John Podesta was said to remain in New Zealand to preside over what was described as “A Global Progressives Event.”

The event was called “The Path to Progress” :

However, in the same interview John Podesta also said that New Zealand is a “big juicy target.” Can this only be a coincidence or is there a macabre synchronicity connected with this tragic event? Only days after Podesta called New Zealand a “big juicy target” we have the Christchurch shooting.  During the same interview he also said that hacked information could be weaponized as fake news, and stated that, “Vladimir Putin must be sitting in the Kremlin saying this is the best return on investment I ever got – I’ve got a pliant President of the United States.”  See more at Leo Zagami

By Stefan Stanford | All News Pipeline – While I woke up this morning expecting to write a story about just how incredibly deeply corrupt America has become as Michael Snyder reports in this new story over at the Economic Collapse Blog following the college admissions scandal that has rocked parts of Hollywood and some of the global elite who were buying their children’s way into some of the top universities across America, I was immediately sidetracked by some of the absolutely bizarre coincidences and signs following the mosque shooting in New Zealand that the globalists and mainstream media want EVERYBODY to know about because it perfectly fits their agenda.

Despite the fact that scumbag cannibal John Podesta was just in New Zealand days ago to warn that the 2020 New Zealand elections are a ‘juicy target’ for a major hack (why is POS Podesta still relevant, by the way?), and that the entire scenario in New Zealand provides the perfect opportunity for the globalists to further censor the internet, this ‘attack’ completely demonizes the ‘alt right’, President Trump and his supporters at a time when the globalists are attempting to take down his presidency.

As Mike Adams reports in this new story over at Natural News talking of the photo directly below, “here’s a screen grab of the video the shooter live-streamed on Facebook. Note the bizarre scrawling in white marker on this shotgun which was used at the beginning of the shooting. The fact that this event was carefully scripted, video recorded and published on social media proves that this real violence was staged as a global media event to achieve a specific political purpose.”

What might that ‘political purpose’ be? At a time when even President Trump is hinting at a potential civil war in America as was reported within this Daily Mail story, and ‘nationalism’ and ‘populism’ spreading rapidly around the world at a time when the globalists had hoped to ‘have the planet in the bag’, it’s quite clear that nothing is off limits to them in their goal to take down President Trump and demonize his supporters while completing their ‘end game’ for America. Read much more at All News Pipeline

Get ready Folks. Keep your eyes and ears open and cameras at the ready! But more important are you ready for Eternity in case you are a victim?