Skip to content
It should come as no surprise as Hellywood gives the masses what they want! American has become a modern day Sodom and Gomorrah! The Hellywood Hypocrites with big mouths and black hearts speak with their daddy’s forked tongue! 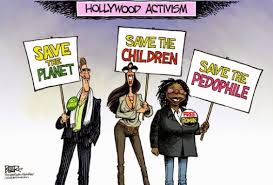 News Wars – Despite a wave of sexual assault allegations that have rocked Hollywood, film executives at Sony have decided to show a film depicting a relationship between a teenage boy and an adult male – a decision slammed by former child actor Corey Feldman.

The Sony Pictures Classics film “Call Me By Your Name,” which depicts a relationship between a 17-year-old boy and a 24-year-old man, has been generating rave reviews and drawn speculation about an Oscar nomination after picking up three Golden Globe nominations and an award for best picture by the Los Angeles Film Critics Association.

Released in select theaters on November 28, the movie has earned a 98 percent rating from critics on Rotten Tomatoes and 90 percent from audiences.

Despite the film’s creepy premise, made more so in light of the wave of sexual assault allegations that have rocked Hollywood, defenders of the film assert that the love affair is consensual and would not be illegal given that it takes place in Italy, where the age of consent is 16.

Actor Corey Feldman, who announced plans to name Hollywood pedophiles who abused him as a child actor following a incident during which two trucks drove towards him at high speed, questioned the premise of the film after another Twitter user claimed it did not depict “child grooming.”

“We think it’s at least questionable, and at worst glorifying pedophilia,” declared Gabe Hoffman, co-producer of “An Open Secret,” a documentary about child sexual abuse in Hollywood released in 2014.

David Sims of The Atlantic described the film as a “sumptuous new romance, which follows a deep connection that springs out of those restless days of late adolescence.”

Others who reviewed the film wisely questioned the timing of the film’s release.

“Perhaps we can, at least, agree that maybe promoting a movie about a 25-year-old man seducing a 17-year-old boy is not exactly wise in light of the revelations about Harvey Weinstein, Kevin Spacey and a dozen other Hollywood A-listers?” asked Paul Bois in The Daily Wire. “Apparently not.”