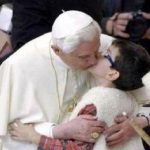 A pedophile priest with HIV, who admitted to raping 30 young girls between the ages of 5 and 10 years old, has been absolved by the Roman Catholic Church and will not face criminal charges.

The priest Jose Ataulfo Garcia was acquitted of any crime by the Archdiocese Primada de México after confessing to have sexually abused dozens of girls in the indigenous community of Oaxaca, reports the platform ‘Anonymous’ of Mexico. The crime of abuse and rape of 30 girls between the ages of 5 and 10, admitted by the cleric himself, adds to the fact that Garcia is a carrier of HIV.

Neither the State of Mexico nor any organization defending the rights of children has spoken about this acquittal, probably due to the respect that the Catholic Church inspires in indigenous areas. In addition, this religious institution has a great influence in Mexican institutions: of the large number of victims, only 2 dared to officially denounce.

See the rest at Freedom Outpost.