Psalm 14:1-4 The fool hath said in his heart, There is no God. They are corrupt, they have done abominable works, there is none that doeth good. The LORD looked down from heaven upon the children of men, to see if there were any that did understand, and seek God. They are all gone aside, they are all together become filthy: there is none that doeth good, no, not one. Have all the workers of iniquity no knowledge? who eat up my people as they eat bread, and call not upon the LORD.

This particular Satanic Temple was started about two years ago in New York. Doug Mesner is the founder of the New York Temple. He goes by the alias Lucien Greaves. He states that he grew up “in the shadow of the Satanic Panic,” when a wave of media reports alleging Satanic connections to crimes created fear and resentment.

Mesner asserts that he studied the background of Satanic organizations as he got older and was attracted to a number of the elements, including the bizarre, the forbidden and the anomalous, and an independence from cultural symbols.

The seven fundamental tenets of the Satanic Temple are a mixture of multiple beliefs…. In my opinion.

This is based on Witchcraft which is the worship of nature. (Hardly coincides with their philosophy that your right comes first and you are free to pursue your desires regardless of anyone else’s opinions, concerns or considerations.)

Anarchy is basically. This is the basic creed of satanism “do what thou wilt which is the whole of the law”. (Just free license to behave in any foul and dispicable manner they please, in the name of what they call justice. Based on what?)

This is Atheism in a nut shell.

A bit of Christian morals in the mix? (Not really, because they are the ones who determine what is right and what is wrong, just what type of mistake they reference here is unclear and left to interpretation.) 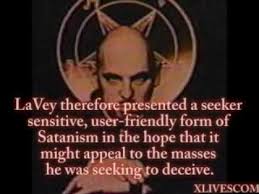 I submit that Mr. Mesner/Greaves did not research his topic very thoroughly. If he believes the Satanic Church is promoting noble, honorable and altruistic values, he has been totally duped! If these misguided followers truly believe that Satan is not an entity and they do not WORSHIP any GOD, then they should cast aside all the appearances of worship. True Satanism teaches the embracing of ones humanistic and base desires in all forms, without internal restraints or constraints from any outside force or entity. Its what is called the Sin Nature. Whatever you desire is fair game. Therefore, based on their behavior as presented publicly, the Satanic Temple is more akin to Witchcraft. Witchcraft is about the Worship of the creation, including entities/Gods/Goddesses. Satanists call upon the name of Satan, hail his name, wave his hand signals, erect graven images dedicated to him, and perform rituals and acts that appear to be worship, in his name. Yet, they claim they do not worship any entity…of course, they claim they do not perform sacrificial rituals either. Do they really think they are fooling anyone? Well, apparently, they are fooling many people everyday.

Jex Blackmore a leader of the recent chapter in Detroit Michigan says, “It’s peaceful,” “The idea of sacrifice specifically is to appease some demon or some god, and that’s a supernatural belief that we don’t subscribe to.”

Now here is another difference between Satanism and the Temple. Satanists for the most part will cuss you out, trample on you to get ahead, and seek to destroy you if you cross them in anyway. This is not peaceful but again, is what witchcraft teaches. On a side note here, the Muslims claim to be a peaceful religion too and look how peaceful they are!!

Miss Blackmore was raised Lutheran, a offshoot of Catholicism, says her new religion embraces individuality and equality. Wearing all black with an upside-down cross necklace, she described the movement as a coming together of atheists and outsiders.

“We believe in a metaphorical, literary construct of Satan,” she said. “He’s a symbol for rebellion, a symbol of human nature, the thirst for knowledge.”

This is the very thing that Satan told Eve in the garden. You will gain the knowledge of God if you eat the forbidden fruit. Satan was saying to Eve, God does not want you to have knowledge and he is still convincing people of the same thing today!!