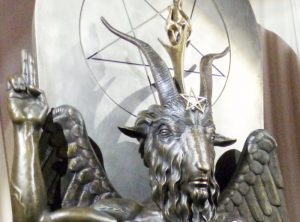 SOLDOTNA, Alaska (AP) — A Satanic Temple member who won the right to open a regional Alaska government meeting declared “Hail Satan” during her first invocation, prompting about a dozen officials and attendees to walk out.

Tuesday’s invocation that started the meeting of the Kenai Peninsula Borough also spurred a protest outside the southern Alaska borough’s administration building that drew 40 people, The Peninsula Clarion newspaper reported .

Protesters held signs saying “reject Satan and his works” and “know Jesus and his love.”

During her invocation, Satanic Temple member Iris Fontana said, “That which will not bend, must break, and that which can be destroyed by truth should never be spared as demise. It is done, hail Satan,” Kenai radio station KSRM reported .

She was among the plaintiffs in the lawsuit litigated by the ACLU of Alaska against the borough after it approved a 2016 policy saying that people who wanted to give the invocations at the government body’s meetings had to belong to official organizations with an established presence on the Kenai Peninsula, which lies 75 miles (121 kilometers) south of Anchorage. Other plaintiffs who had been denied permission to give the invocations included an atheist and a Jewish woman.

The Alaska Supreme Court last October ruled that the borough policy was unconstitutional and the borough government changed it in November to allow anyone to offer invocations regardless of religion.

Assembly members Norm Blakeley and Paul Fischer and borough Mayor Charlie Pierce were among those who left the assembly chambers along with some audience members.

Assembly members are not required to attend the invocation to participate in meetings.

The protesters included William Siebenmorgen, who flew to Alaska from Pennsylvania for the event.

“God will be pleased with our public prayers of reparation. We want God’s blessings on America, not Satan’s curses. Lucifer is the eternal loser. Let’s keep him out,” he told KSRM. Source: Microsoft News

How is Satan the god of this world

2nd Corinthians 4:3-4 “But if our gospel be hid, it is hid to them that are lost: 4 In whom the god of this world hath blinded the minds of them which believe not, lest the light of the glorious gospel of Christ, who is the image of God, should shine unto them.”

Got Questions – The phrase “god of this world” (or “god of this age”) indicates that Satan is the major influence on the ideals, opinions, goals, hopes and views of the majority of people. His influence also encompasses the world’s philosophies, education, and commerce. The thoughts, ideas, speculations and false religions of the world are under his control and have sprung from his lies and deceptions.

This is not to say that he rules the world completely; God is still sovereign. But it does mean that God, in His infinite wisdom, has allowed Satan to operate in this world within the boundaries God has set for him. When the Bible says Satan has power over the world, we must remember that God has given him domain over unbelievers only. Believers are no longer under the rule of Satan (Colossians 1:13). Unbelievers, on the other hand, are caught “in the snare of the devil” (2 Timothy 2:26), lie in the “power of the evil one” (1 John 5:19), and are in bondage to Satan (Ephesians 2:2).

So, when the Bible says that Satan is the “god of this world,” it is not saying that he has ultimate authority. It is conveying the idea that Satan rules over the unbelieving world in a specific way. In 2 Corinthians 4:4, the unbeliever follows Satan’s agenda: “The god of this world has blinded the minds of unbelievers, so that they cannot see the light of the gospel of the glory of Christ.” Satan’s scheme includes promoting false philosophies in the world—philosophies that blind the unbeliever to the truth of the Gospel. Satan’s philosophies are the fortresses in which people are imprisoned, and they must be set free by Christ.

An example of one such false philosophy is the belief that man can earn God’s favor by a certain act or acts. In almost every false religion, meriting God’s favor or earning eternal life is a predominant theme. Earning salvation by works, however, is contrary to biblical revelation. Man cannot work to earn God’s favor; eternal life is a free gift (see Ephesians 2:8-9). And that free gift is available through Jesus Christ and Him alone (John 3:16; 14:6). You may ask why mankind does not simply receive the free gift of salvation (John 1:12). The answer is that Satan—the god of this world—has tempted mankind to follow his pride instead. Satan sets the agenda, the unbelieving world follows, and mankind continues to be deceived. It is no wonder that Scripture calls Satan a liar (John 8:44). Source: Got Questions