Adan Salazar | News Wars – A bizarre video shows a prominent Black Lives Matter leader taking part in an occult ritual in which she dresses as a winged demon and prays for her incarcerated brother. 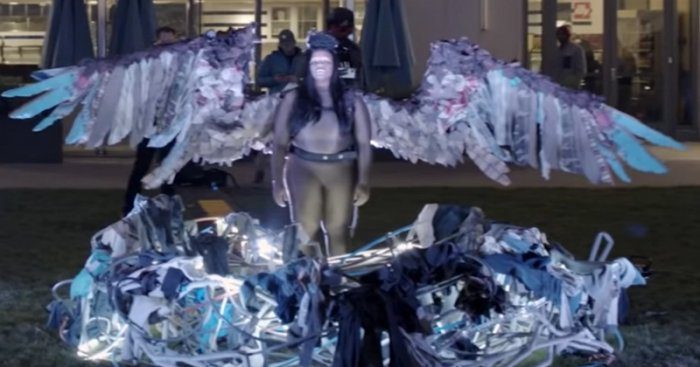 In the unsettling video from this past June, Patrisse Cullors, founder of the BLM Los Angeles chapter, is decked out in a tight gold outfit with large wings as she grabs her brother’s clothes from a nearby tree and throws them over a giant nest of pipes.

Analysis on this story from Alex Jones:

Falling directly in line with her spiritual “art,” Cullors has admitted in 2015 to being a “trained Marxist,” a political ideology founded by socialist Karl Marx, who infamously rejected God and religion.

Proof there are Very Dark Forces behind Black Lives Matter

More on how Cullors’ eerie ritual, her belief in ancient spirits, and how the BLM movement are tied to Satanic witchcraft from The New American:

Of course, Christians, pointing to Ephesians 6:12 and its reference to spiritual warfare, have been making this argument since the fruit of BLM became more clear: destruction, hate, looting, burning, Marxism, division, riots, and more. But until recently, the spiritual nature of the struggle was simply inferred and deduced from the Bible and the news. Now, the proof is available to all.

In a recorded conversation with Cullors, BLM Los Angeles founder and California State University Professor of “African Studies” Melina Abdulla reveals more than she thought she should have. “Maybe I’m sharing too much, but we’ve become very intimate with the spirits that we call on regularly, right.” she explained. “Like, each of them seems to have a different presence and personality, you know. I laugh a lot with Wakisha, you know. And I didn’t meet her in her body, right, I met her through this work.”

Cullors echoes the sentiments of Abdulla. “It’s a very important practice, um, hashtags are for us, are way more than a hashtag, it is, um, literally almost resurrecting a spirit so they can work through us to get the work that we need to get done,” said Cullors, one of the three founders of BLM. “I started to feel personally connected and responsible and accountable to them, both from a deeply political place, but also from a deeply spiritual place.”

“Always, you know, in my tradition you offer things that that your loved one who passed away would want, you know, whether it’s like honey or tobacco, things like that,” the trained Marxist and BLM co-founder continued. “And that’s so important, not just for us to be in direct relationship to our people who’ve passed, but also for them to know we’ve remembered them. Um, I believe so many of them work through us.”

Cullors also admits that the very first thing BLM leaders do when they hear of a “murder” is to pray to the spirits and “pour libation.” Again, she emphasized, this is not just about “racial and social justice.” “At its core, it’s a spiritual movement,” she continued. “You can’t pretend like that work is just organizing work. That’s, you know, that’s some serious stuff.”

Replying to Cullors’ video on YouTube, one commenter noted, “This is occultism.”

Another user replied, “nothing short of Witchcraft, African Ritual witchcraft. Aje Iyami Witches (aka mothers aka ancestors aka other names as well).”

Yet another Youtube commenter broke down how Cullors’ ritual is tied directly to witchcraft:

The founders of BLM are tricking people into a religion called Ifa. Iyami is an Ifa term for witch. Look up the conversation between Patrisse Cullors and Melina Abdullah in a video called “A Prayer for the Runner by Patrisse Cullors.” They offer libation to the dead (pouring out of a liquid offering as a religious ritual), they chant the names of the dead (“say her name!” over and over). They openly admit this is a spiritual movement, they are conjuring the dead and working with spirits. BLM is lead by witches, folks. It’s a literal cult.