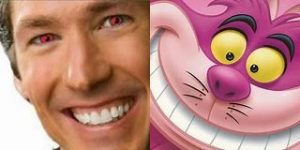 Joel Osteen — a fake pastor and pretend Christian — has, however, been spotted marching along with these hooligans in the streets of Houston, TX, where his multi-million dollar enterprise is headquartered. Almost exactly a year ago, he was spotted marching with Lady Gaga at a gay pride march. I guess since pride festivals have been canceled, this is second best for him. At least he’s wearing a mask.

Geoffrey Grider | NTEB – Laodicean Christian entertainers like Joel Osteen and Paula White took part in Blackout Tuesday, started by Black Lives Matter, that advocates for the tearing down of the fabric of our society by violent protest.

False teacher and Laodicean heretic Joel Osteen, miffed that the race riots seemed to have cancelled out the LGBTQ Pride Marches, decided to march instead with Black Lives Matter and ANTIFA for BlackOut Tuesday in Houston. He had plenty of company when his Laodicean buddies like John Hagee, Paula White Tony Evans and others stepped in to join him. If you ever wanted to see a picture of the lukewarm and useless Laodicean Church of the last days, brother, this is it.

Joel Osteen can do this because when you don’t stand for anything, you find that you can associate with a very broad and very diverse group of people. These marches are the very symbol of lawlessness in America, and have left tens of millions of dollars worth of damage and over 12 people dead so far. Yet these Laodicean frauds find themselves right at home with these criminals. How come no one of marching in the memory of David Dorn? He was a black police officer shot to death by thugs from Black Lives Matter. He celebrated BlackOut Tuesday by being dead, and no one in the press, in the church or in the marches cares one way or the other about him. His black life didn’t matter at all.

FROM REFORMATION CHARLOTTE: In the midst of outright chaos across the country in the wake of George Floyd’s death at the hands of a Minneapolis police officer, anarchy has broken out in cities all over the country. Stores are being looted. Buildings are being burnt to the ground. Cops are being murdered. And complete and total destruction is the end goal of far-left activists like Black Lives Matter and ANTIFA who, for the most part, are running the show in these city streets.

Despite the fact that there are a few peaceful protesters, it is undeniable that these protests are not peaceful. And in the midst of the complete and total act of defiance against law and order, anyone in these streets marching with these people should be seen as participants. Their very presence is an act of approval of what is taking place — even if you speak against it.

From a Christian perspective, it is normally best to disassociate from chaotic rebellion against government–especially when the cause has devolved from a righteous movement to an unrighteous power grab with an end goal of the destruction of Western civilization. But, Joel Osteen is not a Christian — so what should we expect?

Joel Osteen — a fake pastor and pretend Christian — has, however, been spotted marching along with these hooligans in the streets of Houston, TX, where his multi-million dollar enterprise is headquartered. Almost exactly a year ago, he was spotted marching with Lady Gaga at a gay pride march. I guess since pride festivals have been canceled, this is second best for him. At least he’s wearing a mask. READ MORE