I am not going to post the video of the Racists idiocy. I am sure YouTube will have them prominently displayed. What I will post is this blasphemous Witch’s comments about Jesus and wanting white people to die below.

This spawn of Satan should NOT be conducting anything about racism. She is a racist and wants White people to die! 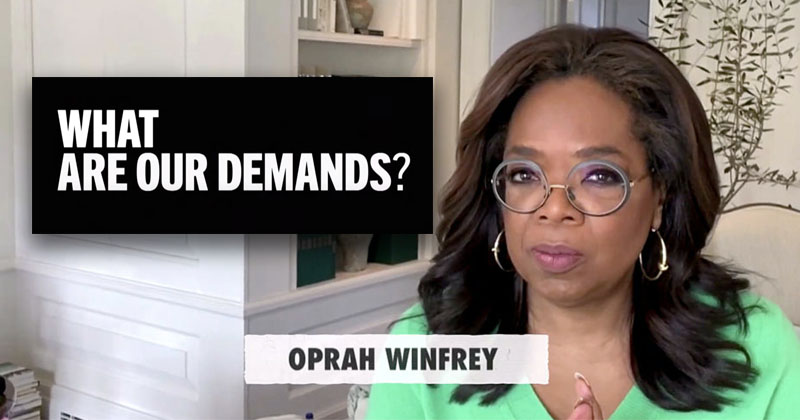 The event, called “Where Do We Go From Here?”, which aired Tuesday and will continue Wednesday, features over a dozen black social justice and far-left political figures, including failed Georgia gubernatorial candidate Stacey Abrams and Atlanta Mayor Keisha Bottoms.

“I’ve been having private conversations with friends and thought leaders about what’s next and where we go from here,” Winfrey said last week in a statement. “I thought it would be both of interest and service to bring their ideas, concerns and comments into a national spotlight.”

In the promo, Oprah outlines questions she will pose to the guests, including “What matters now?”, “What do we want?” and “What are our demands?”

Demands? After weeks of rioting, looting, and destruction, this sounds more like a hostage situation than an honest “conversation” about racism.

“Systemic racism and the current state of America will be key topics of a discussion that aims to provide ‘important dialogue and helpful resources in this challenging time as we mourn the murder of George Floyd and ask ourselves how can we come together to create meaningful change,’ according to OWN [ Oprah Winfrey Network] President Tina Perry,” the L.A. Times reported Tuesday.

Given the presence of multiple Democrat politicians and radical social justice figures, the event will likely promote divisive far-left issues like “white privilege,” Medicare For All, Green New Deal, overthrowing capitalism, and defunding the police nationwide.

More will be posted as it becomes available.

Oprah is NOT a Christian as she claims. We can clearly see that in the videos that follow! Oprah Winfrey is double-minded. Says she will not run, but then considers. Gives speech that indicates she will, says no again. Then her friend Gayle King says no she is not, but has been poking and prodding her all the while!

James 1:5 “If any of you lack wisdom, let him ask of God, that giveth to all men liberally, and upbraideth not; and it shall be given him. 6 But let him ask in faith, nothing wavering. For he that wavereth is like a wave of the sea driven with the wind and tossed. 7 For let not that man think that he shall receive any thing of the Lord. 8 A double minded (wo) man is unstable in all his (her) ways.”

Jesse is correct that the True God of the Bible and Heaven will NOT tell her to run! However, as shown above, she does NOT hear from God. She takes marching orders from the many gods in her false religions! I think she WILL try and run!