So many of them are really anti-Christ’s and Wolves in Sheep’s clothing you just don’t know.

“A time will come when instead of shepherds feeding the sheep, the church will have clowns entertaining the goats.”– C.H. Spurgeon 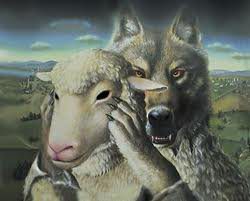 If they are preaching feel good massages, i.e. the Social Gospel, always talk of Prosperity and Money, never mention the Cross of Jesus, won’t mention Sin, Repentance or Hell, then you can be 99.9% sure they are a sell out and are in Satan’s Camp!

If they are guilty of the above, then they surely won’t preach against the Domestic Terrorist Democrats, Black Lives Matter or Antifa!

Also see the Original – Secret FEMA Plan To Use Pastors as Pacifiers in Preparation For Martial Law  and Communist/Socialist/Progressive Clergy “Reclaim” Jesus from Americans?

2nd Peter 2:1-3 “But there were false prophets also among the people, even as there shall be false teachers among you, who privily shall bring in damnable heresies, even denying the Lord that bought them, and bring upon themselves swift destruction. 2 And many shall follow their pernicious ways; by reason of whom the way of truth shall be evil spoken of. 3 And through covetousness shall they with feigned words make merchandise of you: whose judgment now of a long time lingereth not, and their damnation slumbereth not.”

Clergy Response Teams Are Being Activated! Can You Trust Your Pastor?

Dave Hodges – The stories are everywhere on the net; The Clergy Response Teams are being activated and that can mean only one thing, someone inside of FEMA is preparing for the purge of conservatives, particularly conservative Christians after the Democrats (ie Bolshevik communists) seize control of the government. Here is some relevant history that every American needs to be aware of which explores the important answers to this question.

Who is Next? Has your pastor condemned the Islamic practice of beheading Christians? Does your pastor fear God or does he fear Chuck Schumer and Nancy Pelosi and her promised persecution of anyone who speaks out against radical Islamic inspired terrorism and the elements of a Red Dawn invasion force who have coalesced on our border with many more coming? Has your preacher spoken out on behalf of the 70 million babies who have been butchered by Planned Parenthood. Who speaks for the babies? Who speaks for Christians? Who speaks for the citizens of a nation that are under judgement by God for their reprehensible sins?

Being a Christian Is Not for the Faint of Heart

Maybe it is the fate of the modern Christian to die a martyr’s death. Most of the disciples of Jesus were martyred for their uncompromising views towards corrupt civilian authority, except for John, who died of extreme old age and Judas, who committed suicide after betraying Jesus. Many of Jesus’ followers met an untimely end. For example, Peter was crucified, head downward, during the persecution of Nero. James, was thrown from a pinnacle of the Temple, and then beaten to death with a club. Thomas, the doubter, was run through the body with a lance at Coromandel, in the East Indies. Yet, today, most of our tax-exempt churches have embraced the suicidal course of Judas as they have made a deal with the devil by espousing government doctrine even when it violates the word of God.

In opposition to the early founders of the church and in opposition to the teachings of Jesus Christ, today’s church bends over in the face of evil. It acquiesces to the evil and drags its followers to the gates of hell by demanding compliance to the illegitimate authority and decidedly non Christian forces which are subjugating this country. Today’s pastors are doing so under the guise and bastardization of Romans 13. Yes, that’s right, obey the corrupt government that allows the Clinton crime family to steal billions as they have unleashed untold suffering upon the world through the illegitimate Covid-19 lockdowns, while this mafia tells us that God demands that we obey these criminals in the complete bastardization of Romans 13.
Should You Leave Your Church?

The truth be known, you really do not need the church, remember, wherever two or more are gathered in His name, the Lord is present. With an estimated 100,000 Pastors who belong to the Clergy Response Team, it can be safely said that it would be better to lose your church, and avoid being led astray by a government-serving Clergy Response Team pastor, than to lose your soul for all of eternity.

There are other reasons to leave your church beside the fact that most support the importation of an unknown number of terrorists to our country. According to the Pope, Allah and God are equals because the government says so and Romans 13 commands you to obey. However, the words I just wrote puts me in violation of the new interpretation of Romans 13. I am a sinner if I speak out about the forces who have perpetrated the rise of the Satanic New World Order which is now in place. The modern interpretation of Romans 13 is pure blasphemy. This scripture has been morphed into a doctrine espousing the “Divine Right of Kings” in which God has somehow chosen a king to ruthlessly rule over a people and it is incumbent upon the people to accept their “God-given fate”, The flock are commanded to “…submit himself to the governing authorities, for there is no authority except that which God has established.” This false interpretation is nothing but a divine coronation of a ruthless, self-serving government and Christians are expected to capitulate and honor the same kind of thievery, lawlessness and murder which inspired Jesus to expel the money changers from the Temple. Yet, much of the church remains silent on the evil that has been visited upon our country. Firebombing, looting, murder and victimization innocent people permeates our land and yet, many of the pastors are marching with these communist criminals in the streets of America (eg Joel Osteen).

Ask yourself, what kind of God would fail to command his clergy to not speak out and to condemn the actions of the criminal money changers on Wall Street, or the Antifa thugs that occupied Seattle? Those that are inspired only by the love of money as they continue their heinous assaults upon humanity in the form of unlabeled poisonous GMO’s, the theft of solvent home mortgages by the mega banks, and the secret detentions and the murder of American citizens under the NDAA, supporting the doctrine of endless war in which millions die? What kind of God would order his followers to remain silent as the bankster controlled government plans to commence a world war starting with Venezuela in order to support the preservation of the depopulation agenda of the globalists? In actuality, no God of the Bible would ever command his followers to both enable and to serve the evil which permeates our government. Wait a minute, you say that Trump will drain the swamp. That swamp would take a generation of longer to drain. Is Hillary in jail? She is low-hanging fruit and she still walks free victimizing the world. Trump has done nothing about Hillary. What has been done about the Bidens’ crisis with Burisma in Ukraine? Nobody from the Deep State ever goes to jail.

Trump is nearly powerless without our help and instead of helping him, we listen to pastors and priests who praise our corrupt leaders. Trump can only hope to slow it down and by himself he cannot stop the complete obedience from a corrupt Deep State as they have taken a big step towards accepting the Mark of the Beast (i.e. the National ID Card that will soon be a part of every wallet). This is a very dangerous precedent, and this could potentially imperil the salvation of millions if Christians allow this false doctrine of Romans 13 to further expand across our nation’s churches. WHERE IS YOUR PASTOR ON THIS ISSUE?
Conclusion

You may not be able to answer this question, however, your pastor may be someone who is helping the government gain information about you and your family. Is your pastor working for the enemy of all Christians as a member of the Clergy Response Team? In part two of this series we will explore the answer to this important question and the information that will be exposed is stunning in its content.