Antifa is pulling a page from the Islamist’s Terror book, and are now promoting Beheadings!

The Bible says that we Christians, and ALL those of other Religions who oppose the Anti-Christ, WILL be BEHEADED! Revelation 20:4 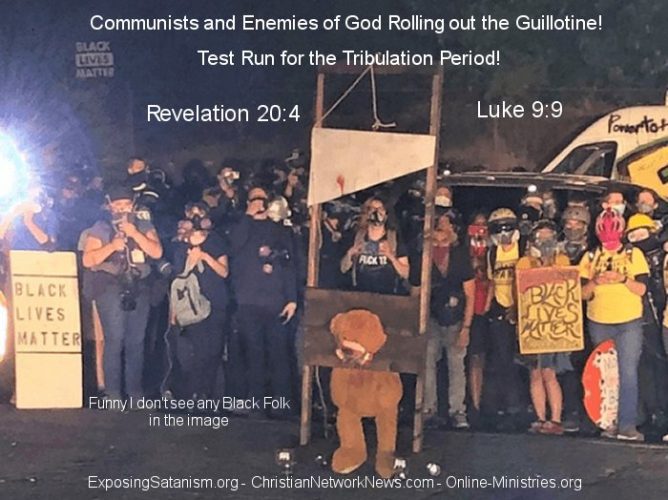 The Portland Police Bureau issued an official statement describing “rocks, bottles and dangerous items” that were thrown at police, alongside blinding lasers wielded by left-wing rioters trying to cause permanent eye damage to law enforcement. Remember these are the people every Democrat in America describes as “mostly peaceful.” Source

Via the PPB statement:

Many participants in the march carried hardened shields, helmets, armor, gas masks, and wore all black clothing. At least one participant targeted the Portland Police Air Support Unit airplane with a green laser. This is extremely dangerous and could cause disorientation for the pilot, in addition to permanent eye damage. Individuals in the crowd threw rocks, eggs, and glass bottles in the direction of the officers… Someone rolled a mock guillotine with a stuffed bear into the street (photo). The bear and multiple U.S. flags were burned. Paint balloons were launched at officers, as well as green lasers.

It is interesting that on the Satanic Ritual Calendar,  St. Bartholomew’s Day (Great Sabbat and Fire festival) is on the 24th of August.These Satanists could have been celebrating a couple days early!

The Catholics are involved! Imagine my shock about that!

The St. Bartholomew’s Day massacre (French: Massacre de la Saint-Barthélemy) in 1572 was a targeted group of assassinations and a wave of Catholic mob violence, directed against the Huguenots (French Calvinist Protestants) during the French Wars of Religion. Traditionally believed to have been instigated by Queen Catherine de’ Medici, the mother of King Charles IX, the massacre took place a few days after the wedding day (18 August) of the king’s sister Margaret to the Protestant Henry III of Navarre (the future Henry IV of France). Many of the most wealthy and prominent Huguenots had gathered in largely Catholic Paris to attend the wedding.

The massacre began in the night of 23–24 August 1572 (the eve of the feast of Bartholomew the Apostle), two days after the attempted assassination of Admiral Gaspard de Coligny, the military and political leader of the Huguenots. King Charles IX ordered the killing of a group of Huguenot leaders, including Coligny, and the slaughter spread throughout Paris. Lasting several weeks, the massacre expanded outward to other urban centres and the countryside. Modern estimates for the number of dead across France vary widely, from 5,000 to 30,000.

What do we see the Communist Democrats, Antifa and BLM doing? They are expanding to the Suburbs!

The massacre also marked a turning point in the French Wars of Religion. The Huguenot political movement was crippled by the loss of many of its prominent aristocratic leaders, as well as many re-conversions by the rank and file. Those who remained were increasingly radicalized. Though by no means unique, it “was the worst of the century’s religious massacres”. Throughout Europe, it “printed on Protestant minds the indelible conviction that Catholicism was a bloody and treacherous religion”. Source

How did the Apostle Bartholomew die?

Like most of the apostles, Bartholomew was probably martyred—but there are several traditions about how exactly he died. The most popular and prolific tradition is that he was flayed and then beheaded, which is why most art portraying him shows him holding or wearing his skin in some way, or else associates him with flaying knives.  Source