If you are praying to dead people, You are NOT in contact with a lost loved one or someone who died hundreds of years ago.

What you are in contact with, and praying to, are fallen angels, demons and even Satan himself! 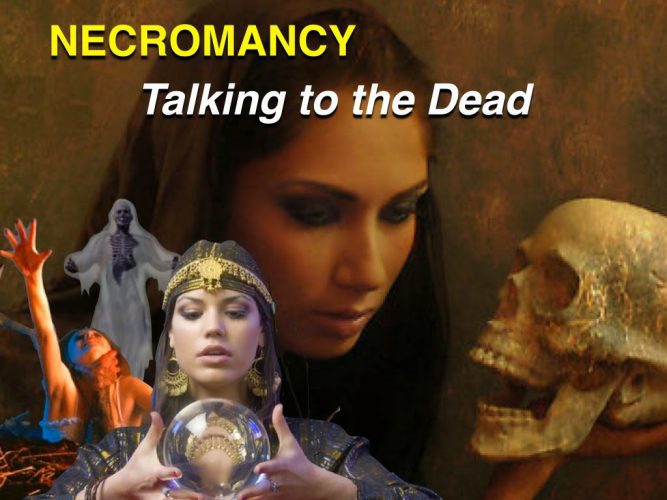 When a person dies, their Soul and Spirit are in one of two places, Heaven or Hell. What does Scripture say about it?

The well-known parable of the rich man and Lazarus appears, in the Gospel of Luke. (Luke 16:19–31) Jesus tells of the relationship, in life and in death, between an unnamed rich man and a poor beggar, named Lazarus.

In the account, the rich man is in Hell and can see Lazarus (not the same one who Jesus called out of the tomb) in Abraham’s bosom. Lazarus had been a servant while he lived. The rich man asks Abraham to send Lazarus, to dip his finger in water and touch his tongue because he is aflame. He also asked Abraham, if he would send Lazarus to his house to warn his yet living relatives about hell, “lest they also come into this place of torment.”

“Abraham’s Bosom” was a holding place for Old Testament saints who had lived righteously and were waiting for the Resurrection. This holding place is not to be confused with the Catholic Purgatory. This is where a person’s Soul and Spirit were held waiting for that glorious day when Jesus would come to redeem them, once the sin debt had been paid in full. Ephesians 4:7-9

Now, since the day Jesus died on the Cross and rose again, when a saved person, a Born Again believer dies, his or her soul and spirit go immediately to be with the Lord. (See 2nd Corinthians 5:8) That shell of a body that was left behind is waiting for that day when when the trumpet will sound, and the soul and spirit will be reunited with the Glorified body, PRAISE God! 1st Corinthians 15:50-58

Dictionary Definition: The practice of supposedly communicating with the spirits of the dead in order to predict the future. Black magic; sorcery. Magic qualities.

Got Questions – Necromancy is defined as the conjuring of the spirits of the dead for purposes of magically revealing the future or influencing the course of events. In the Bible, necromancy is also called “divination,” “sorcery” and “spiritism” and is forbidden many times in Scripture (Leviticus 19:26; Deuteronomy 18:10; Galatians 5:19-20; Acts 19:19) as an abomination to God. It is something that the Lord speaks very strongly against and is to be avoided as much as any evil. The reason for this is twofold.

First, necromancy is going to involve demons and opens the one who practices it to demonic attack. Satan and his demons seek to destroy us, not to impart to us truth or wisdom. We are told that our “enemy the devil prowls around like a roaring lion looking for someone to devour” (1st Peter 5:8). Second, necromancy does not rely on the Lord for information, the Lord who promises to freely give wisdom to all who ask for it (James 1:5). This is especially telling because the Lord always wants to lead us to truth and life, but demons always want to lead us to lies and serious damage.

The idea that dead people’s spirits can be contacted for information is false. Those who attempt such contact inevitably contact demonic spirits, not the spirits of dead loved ones. Those who die go immediately to heaven or hell—heaven if they believed in Jesus as Savior, and hell if they did not. There is no contact between the dead and the living. Therefore, seeking the dead is unnecessary and very dangerous.

What does the Bible say about praying to – speaking to – talking to the dead?

Got Questions – Praying to the dead is strictly forbidden in the Bible. Deuteronomy 18:11 tells us that anyone who “consults with the dead” is “detestable to the Lord.” The story of Saul consulting a medium to bring up the spirit of the dead Samuel resulted in his death “because he was unfaithful to the LORD; he did not keep the word of the LORD and even consulted a medium for guidance” (1st Samuel 28:1-25; 1st Chronicles 10:13-14). Clearly, God has declared that such things are not to be done.

Consider the characteristics of God. God is omnipresent—everywhere at once—and is capable of hearing every prayer in the world (Psalm 139:7-12). A human being, on the other hand, does not possess this attribute. Also, God is the only one with the power to answer prayer. God is omnipotent—all powerful (Revelation 19:6). Certainly this is an attribute a human being—dead or alive—does not possess. Finally, God is omniscient—He knows everything (Psalm 147:4-5). Even before we pray, God knows our genuine needs and knows them better than we do. Not only does He know our needs, but He answers our prayers according to His perfect will.

So, in order for a dead person to receive prayers, the dead individual has to hear the prayer, possess the power to answer it, and know how to answer it in a way that is best for the individual praying. Only God hears and answers prayer because of His perfect essence and because of what some theologians call His “immanence.” Immanence is the quality of God that causes Him to be directly involved with the affairs of mankind (1st Timothy 6:14-15); this includes answering prayer.

Even after a person dies, God is still involved with that person and his destination. Hebrews 9:27 says so: “…Man is destined to die once, and after that to face judgment.” If a person dies in Christ, he goes to heaven to be present with the Lord (2nd Corinthians 5:1-9, especially verse 8); if a person dies in his sin, he goes to hell, and eventually everyone in hell will be thrown into the lake of fire (Revelation 20:14-15).

God has provided His Son, Jesus Christ, to be the mediator between man and God (1st Timothy 2:5). With Jesus Christ as our mediator, we can go through Jesus to God. Why would we want to go through a sinful dead individual, especially when doing so risks the wrath of God?

What does the Bible say about channeling?

Got Questions – Channeling is the practice of relaying messages from some type of spiritual guide; usually, channeling is done while in a trance-like state. The Bible is clear that channeling and attempting to contact the dead are wrong. Seeking advice from mediums, necromancers, and fortune-tellers is strictly forbidden. Leviticus 19:31 states, “Do not turn to mediums or seek out spiritists, for you will be defiled by them.” Leviticus 20:6 says, “I will set my face against the person who turns to mediums and spiritists to prostitute himself by following them, and I will cut him off from his people.” Deuteronomy 18:12 says that consulting mediums or channeling the dead is “detestable.” Clearly, God sees these practices as sinful and completely without benefit.

Saul, a powerful king of Israel, finally reached the end of his tragic fall away from God when he involved himself in channeling. Saul chose to seek answers from a medium when God didn’t provide him the answers he wanted. In 1st Samuel 28:6–20, Saul asks a psychic to summon the spirit of the prophet Samuel. His grave error is mentioned later in 1st Chronicles 10:13–14, which emphasizes that Saul’s involvement in witchcraft was wrong: “He [Saul] was unfaithful to the Lord, he did not keep the word of the Lord, and even consulted a medium for guidance, and did not inquire of the Lord.”

As Christians, we ought to seek God’s answers to our questions. Praying to or “channeling” any other being is idolatry. Praying to any dead person, including the apostles, Mary, and so forth, is not so very different than holding a séance and asking a dead relative to help us. Most so-called mediums are actually frauds who use memory tricks, planted accomplices, and special effects to fool people. Those that are not frauds are cooperating with dangerous spiritual beings. Satan’s henchmen are adept at appearing as helpful spirits (2nd Corinthians 11:14), making it easy for them to confuse and corrupt people who open themselves up through channeling.