While every tactic has failed to topple President Trump, the Communist Democrats have had NO CHOICE but to call on their false god, the fallen angel Lucifer!

By Jon Watkins and Cynthia Pawl

In a cleverly veiled logo, that says “Death to America”, they incorporated the goat head of their false god to garner more favor with him.

Sacrificing Babies through Abortion is not enough for this blood thirsty devil. Activating Satanic Anarchists to Burn, Loot and Murder in a few cities is not enough. Lucifer is demanding the whole of America—and his servants—the God Hating Communist Democrats—are all too happy to oblige!

The new DNC logo, meanwhile, which claims to say “D20” (as in Democrats ’20) places a map of the United States inside the zero, appearing to read “D 2 America” or “Death to America.”

Death to America, of course, is exactly what Democrats and Leftists really want. It’s what Barack Obama and Joe Biden fought to achieve during their eight years of power, during which Obama worked to systematically destroy the very fabric of this nation while compromising national security and putting treasonous, anti-American globalists in positions of power throughout the Pentagon.

Obama is a sleeper cell traitor to America, yet he remains the darling of Democrats and left-wing voters who think Obama was the “savior” of this nation. (They are oblivious to reality.) Source

Sleepy Joe Biden is merely a stooge, an empty suit filled with demons, because they do NOT have a viable candidate that can pass a vetting test. So, they display a possessed fool, with half a brain, out in front, who is like an old battleship that is about to sink, to take the rest of the attack so they can stay afloat.

Old sleazy, sleepy Joe is also of Lucifer. He is a Racist and has been a champion of abortionists, the LGBTQPXYZ community, and is a sexual pervert himself! BTW, the aforementioned are merely pawns of Lucifer, aka, Baphomet!

As they are servants of Baphomet/Baal/The Great Satan, we should not be surprised that their mission is to destroy everything that is good, in other words EVERYTHING that is GOD’s.  CHANGE is their goal.  Changing everything, making EVIL to be called good and GOOD to be called EVIL.  Turning this world upside down.  Isaiah 5:20-21

They want you to believe that there is no GOD.  But you better believe they KNOW there is a GOD in heaven.  They believe in gods alright.  They never do anything without consulting their stars.  The seat of their gods.  They never take on any project without sacrificing to them and they worship them and honor them naming everything they do after them.  They reject the ONE TRUE God of all and worship the creation instead of the creator.  They want you to do the same.  Even more than that, they want you to worship SATAN/ Lucifer/THE REBEL and the father of LIES!

Now to be fair, the Republicans also use(d) an Inverted Pentagram that is symbolic of the Goats Head, aka Baphomet!

Symbolic meaning of the Republican and Democrat logos

Note the Pre and Post 2000 logos! WHO took the helm of the Republicans in 2000? Why none other than fake Christian George W. Bush, who loved to give the Satanic Salute! 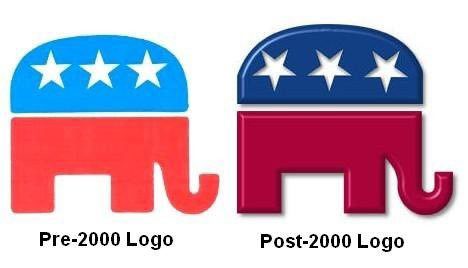 Folks, They Hate President Trump because he is NOT one of them. While he is NOT perfect, is NOT Born Again in my opinion, still it is my belief that GOD has put him in office for a reason.

Some of you are going to get very upset, but I stand by the following article I wrote in 2016. I still see NO EVIDENCE that he has repented and accepted Jesus as Lord and Savior.  I do believe he is VERY CLOSE to doing so. If the right person with the power of the Holy Spirit witnesses to him, he might get his name written in the Lambs Book of Life!

Seeing that Donald Trump, is and always has been numbered among the elite, it is quite possible that he was placed in office as the controlled opposition.  It could all be just another part of their plan to bring down America and destroy our nation.  They could just be acting out their outrage and creating the great struggle that has caused such a HUGE divide in what was once a relatively sane and peaceful nation.  There was a time when American felt secure, remote from all the insanity of the world outside our borders.  You have to admit it took a major upset of some kind to bring us down.  This was likely one part of their scheme along with the racial divide they have worked so hard to create.

I believe Donald Trump was put in office by GOD to expose the truth, to root out those putting on a false facade. Why do you think so many Big Republicans that have been in there for years suddenly stepped aside? They wanted to slip away quietly keeping out of the spotlight so the Communist Democrats don’t spill the beans on them. The ones that are left have made a pact with the Democrats and Lucifer in my opinion. They are acting out a play to keep both sides from learning the truth until it is to late! That time is almost here!

Regardless of how he got in office, God can use anything.  Even a DONKEY!

As we saw in the story of Baalam’s Ass/Donkey in the bible.  You should read the whole thing.

Numbers 22:27-29  “And when the ass saw the angel of the Lord, she fell down under Balaam: and Balaam’s anger was kindled, and he smote the ass with a staff. 28 And the Lord opened the mouth of the ass, and she said unto Balaam, What have I done unto thee, that thou hast smitten me these three times? 29 And Balaam said unto the ass, Because thou hast mocked me: I would there were a sword in mine hand, for now would I kill thee.”

There may not even be an election.  Hold on to your hats folks!  There is a rough ride ahead.  What ever happens in the next few months, we know that the powers that be are working very hard to bring America down.  Once America falls the rest of the world will fall in line with the One World Government.  That will be the government of the ANTICHRIST.

After all, SATAN IS A DEMOCRAT!

We have no reason to FEAR.  One thing we know for certain is that GOD is in control.  He will have the ultimate WORD!