DNC Chair Lucifer Child: Party will Exclude Pro-Life Candidates. Apropos for this First day of May! 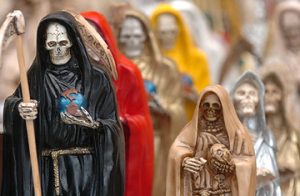 Breitbart excerpt: “Every Democrat, like every American, should support a woman’s right to make her own choices about her body and her health,” Perez said, as the HuffPost reported. “That is not negotiable and should not change city by city or state by state.”

Perez’s comments came after the DNC decided to support Heath Mello in the Omaha, Nebraska, mayoral race. Mello, it was discovered, had previously voted in the state legislature consistent with his personal pro-life views…. Read it all here.

Generations have combined and are now transforming the doomed Democratic Party! The party of the damned has successfully lured in many Millennial’s and Generation Z fools. They have merged the old blood with the new blood. Like Vampires the old bats are trying to hang on by sucking the vigor and life out of the new. It is working, as we see millions in a zombie like state, holding pre-made signs, parroting mantras, never being able to think or talk for themselves!

This is who the leaders of the Democratic Party embrace

Most people who have had the blinders removed from their eyes, were already aware of where Perez’s allegiance lay. However when that Lucifer’s child Tom Perez announced that pro-lifers were not welcome in HIS party, well that just put the sauce on the goose so to speak. We knew that Democrats were wicked to the core and in bed with Planned Murderhood and Satan, but now there is one among the top of their ranks that is actually EVIL enough to openly admit it. Unlike Perez, Ole Debbie Schultz and Dirty Donna Brazile, two very Silly Women were not brave enough to take their masks off. They are like Freemasons who hide behind the “do gooder” facade and really worship Lucifer!

Tom Perez is a Jesuit, a Catholic, cohort of Pedophile/Spirit Cooker John Podesta, who was Crooked Hillary’s campaign manager and partner in crime. These people are aligned with Lucifer and will stop at nothing to regain power or destroy the world if they can’t have their way!

Not only do wicked Democrats hate babies made in the image of God, they hate life in general. They are responsible for the death panels written into Obama Care which denies treatment to someone who is deemed to be no longer useful to society: Terminally ill mom denied treatment coverage — but gets suicide drug approved.

Remember in 2012 the scum at the DNC Convention booed God?

Did Democrats really boo God? Not quite. It’s worse than that.

Thousands of bloggers are reporting this morning that delegates at the Democratic convention in Charlotte booed when God was reintroduced into their party’s platform. That’s not entirely accurate. But the true story does not reflect any better on the Democratic Party.

This Breitbart report has the story right, I think. (note: the article at Breitbart is EMPTY due to the fallout between them and Ben Shapiro) The boos from the floor were aimed at Los Angeles Mayor Antonio Villaraigosa, who was running the convention at the time, and asked for three separate voice votes on the amendment that restored a mention of God. On the 3rd vote, Villaigosa ruled that the “Ayes” had won—by a two-thirds majority.

That ruling from the chair was an obvious abuse of power. It was impossible to say, simply from the volume of voices, whether the “Ayes” outnumbered the “Nays.” To assert that the “Ayes” predominated by a 2-to-1 margin was simply absurd. Quite understandably, many delegates objected to the ruling. So, their boos were aimed at Villaraigosa, not at God.

But it’s not quite that simple. This vote didn’t occur in a vacuum. In drafting the original platform, Democratic leaders had removed references to God (and to Jerusalem as the capital of Israel). They didn’t merely forget to mention God; in updating previous party platforms, they made a conscious decision to remove Him. When that decision was brought to the attention of ordinary American voters, outside the orbit of the Democratic Party apparatchiks, it was unpopular. It didn’t play in Peoria. Belatedly, the Democratic leaders realized that they should put God back in the picture. So, an amendment to the platform was place on the convention’s agenda.

And here’s where things get interesting: That amendment was controversial! Quite a few delegates opposed the mention of God. Some, no doubt, were primarily concerned about the mention of Jerusalem. Party leaders might have simplified matters by introducing two separate amendments: one to restore a mention of God, the other to name Jerusalem as Israel’s capital. But that tactic would not have suited the purposes of the party strategists. They didn’t want an open debate on God (or on Jerusalem) during the convention. They didn’t want to give American voters the opportunity to see just how radical the Democratic party has become. They wanted the amendment approved quickly.
Villaraigosa did his part, pronouncing the amendments victorious at a time when any sentient observer realized that their passage was in doubt. He might have called for a ballot vote, but that could have proved embarrassing. The Breitbart account captures the moment:

And Villaraigosa was lying, in any case–there is no way that the voice vote had passed. Opponents stood up and protested, waving and shouting. The fix was in. The Democratic leadership had to ram a mention of God and a mention of Jerusalem through, violating their own rules, to avoid the fallout within their own ranks.

Today we don’t know whether or not a majority of participants at the Democratic convention objected to mentioning God in the party’s platform. The party leadership didn’t want us to know. Source

Do you also remember that a homosexual loving Methodist preacher called on the god of many names at the 2016 convention?

Democrats embrace perversion and debauchery as evidenced in their acceptance and even promotion of that LGBTQ2 den of devils, as well as those women infected with the disease and mental illness called Feminism.

There are three major issues that reveal where you stand with GOD. 1) Sexual Perversion 2) Right to Life and 3) The State of Israel. People need to wake up and realize that when they cast their votes, they are making a declaration. Whether you are fully aware of what the Party stands for or not, makes no difference to GOD. It is your responsibility to be aware! If you cast your vote with the democratic party, you are declaring to GOD that you don’t care about His Laws and you don’t want HIM involved in your government.

Clearly Democrats are ungodly and wicked. At the same time if you are a die-hard Republican, thinking they can do nothing wrong or that they are going to save the world, then you are in for a rude awakening!  Coming soon  “And he did that which was evil in the sight of the LORD”

Hounds of Hell give up hope on striking a deal with Trump – Congressional Democrats see no hope of compromise with the president and look to obstruct any progress on his agenda.

Thousands expected to hit the streets for May Day protests

May Day: Anti-Trump Illegal Aliens Vow ‘Biggest Workers Strike in over a Decade’