Luke 17:2 “It were better for him that a millstone were hanged about his neck, and he cast into the sea, than that he should offend one of these little ones.”

There is an epidemic in our school system that no one wants to talk about or address. YOU may be party to the grooming, preparing and breaking down of the Immune system of children so that they catch the disease that is running rampant in Hellywood, the Corporate World, the Media, and sadly the Church. Maybe not directly, but by your silence!

That disease is Sexual Perversion. It is what got Sodom and Gomorrah destroyed and what  WILL lead to the destruction of America, if a great move of God does not take place once again! 2nd Chronicles 7:14-15

Have you ever wondered why kids grow up to be deviates? It’s because the people teaching them are deviates. And that includes Mom’s and Dad’s who hand that perversion down to their Children. I know that is the case for me!  Now I know that most of you will read no further because I indicated YOU AS part of the problem. So let me do what Steve Quayle does in interviews and give you the bottom line now!

do not draw a line in the sand and refuse to move that line, YOU are just as guilty as the deviates, the crooks and criminals in ALL facets of society. You can’t look the other way and NOT get involved! You MUST say something and stand for TRUTH and what is RIGHT no matter the consequences. YOU WILL lose friends and family, but to hell with them. THEY ARE THE PROBLEM! Quit trying to appease and be friends with those destine for Hell!

The Church will hate you for taking a stand because Devils run the Church!

John 16:2-3 “They shall put you out of the synagogues: yea, the time cometh, that whosoever killeth you will think that he doeth God service. 3 And these things will they do unto you, because they have not known the Father, nor me.”

Shake the dust from your feet,  get the hell away from them, and Pray for them like this!

Matthew 10:14-15 “And whosoever shall not receive you, nor hear your words, when ye depart out of that house or city, shake off the dust of your feet.15 Verily I say unto you, It shall be more tolerable for the land of Sodom and Gomorrah in the day of judgment, than for that city” (or persons).

I remember when I was in grade school, the 6th grade to be exact. (1966 a time when sex, drugs and rock and roll took hold) Our math teacher was a Queer, a Pedophile and the other teachers knew it. I also remember he was accused of taking a couple of girls into the boys bathroom and showing them his genitals. He was also the same SOB that gave me the paddle nearly every day because I did not conform to the indoctrination that was already in progress in the 60’s. I did not know that then, but looking back I can see what was taking place. 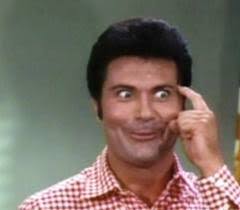 Early grade school, as I remember it, was just old ladies with rulers and when you acted up, you got a good whack with that ruler. That was in the first grade! They were prim and proper as you see in the old movies. Ahhh, but not after I graduated the 6th grade, like ole Jethro Bodine, things sure did change. Some of you know who Jethro is and for those who don’t, get up to speed here.

That is another area of indoctrination. TV! What was on TV back then is a far cry from what we see today. Today’s “entertainment” would have been considered pornography in the 60’s. Look how far down the sewer pipe we have gone, and until 20 years ago, I was just as guilty of that furthering that decent as are the majority today. How? By condoning it and not speaking out and drawing a line in the sand……. but I digress!

Then in high school, some of the female teachers liked to talk about, and flash their stuff. I remember the math teacher used to wear short skirts and then sit on top of the desk with her legs spread slightly. Between her and my queer 6th grade math teacher, it is no wonder I hated math in grade school and learned NOTHING in high school because I was focused on her flashing!

My English teacher, who was a knock out BTW, would always tell us of her Cheer leading days and the times she forgot to wear her tights and did cartwheels. You figure it out! Again, no wonder English was a bad subject for me. Oh and after she left, another one of those Homosexuals took over! That cost me my Diploma and caused a restraining order to be placed on me in my senior year, but again I digress!!!

That was between 40 and 50 years ago and now we see what happens when “What one generation allows in moderation, the next will practice it in excess” 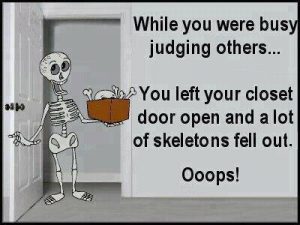 Everyone of us has Skeletons in our closet. No one is exempt. That is why people do not speak out and say anything for fear of their Iniquity being revealed. I am ashamed of the things I have done in the past and I can’t change that. I have asked most of the people I have done evil to forgive me, and more important ask the Lord to forgive me. I turned from my wicked ways. People may not forgive and forget it, but the Lord does and that is all the really matters!

And don’t give me that who are you to judge others crap. I am not a judge. I am a Fruit inspector! Here is what the Bible says about it: Judging Others

Now we have teachers openly having relations with students and going to jail for it. If that is not bad enough, they are teaching kids in grade school how to have Homosexual and Lesbian sex.

Read this at Zero Hedge: How Times Have Changed

The New York Post reports that parents of the Mater Lakes Academy, a school for grades six through 12 in Hialeah, became outraged after a dance teacher reportedly threw a party for a former student after school on Wednesday that included favors in the shape of phallic symbols.

“In the videos, we see how they were preparing for the surprise party. And as the boy walked in, they surprised him with a hat that had a penis attached to the top and a string to be able to pull it so it can get erected,” said an outraged mother, who did not reveal her identity to WSVN.

She added that she was angry because she never taught her daughter those things and that her daughter had been disturbed by the party.

“She couldn’t sleep last night,” she said. “She woke up crying. It hurts that she’s being taught this at the school where I trust she’s gonna be taken care of.”

Mater Lakes Academy officials confirmed that they fired the dance teacher who hosted the party. The school declined to release her identity. Read the rest at Breitbart.

Why won’t they release her name? Because they are the enablers and cover up for each other just as the deviates in Hellywood and Washington DC do! The perverts, deviates and criminals teaching your kids and grandkids and running the country, are the same ones YOU went to school with! Think about it!

And it’s the same reason Why Millennial’s are ditching “Religion” for witchcraft and astrology. It’s what is being taught and allowed! Religion offers nothing but the same practices and rituals as Witchcraft, so it is no wonder the falling away is occurring, Only getting the True Gospel of Jesus Christ and returning to Biblical foundations will cure the Sexual Perversion Disease and the Disease of False Religion! If you are not saved, that is Born Again, and have your faith exclusively, totally and completely in Jesus Christ, you are in bondage to something or someone, and Satan will have dominion over you!

Jeremiah 6:16 “Thus saith the LORD, Stand ye in the ways, and see, and ask for the old paths, where is the good way, and walk therein, and ye shall find rest for your souls. But they said, We will not walk therein. 17 Also I set watchmen over you, saying, Hearken to the sound of the trumpet. But they said, We will not hearken. 18 Therefore hear, ye nations, and know, O congregation, what is among them. 19 Hear, O earth: behold, I will bring evil upon this people, even the fruit of their thoughts, because they have not hearkened unto my words, nor to my law, but rejected it.”

You would think with all of the news of  teachers getting caught and going to jail over the years, others would stop! No, because it is an addiction just like alcohol or drugs being

The deception and cover up continues:

Watch: An Open Secret. The Pedophiles are still working and abusing!

Depravity, Frivolity, and Dissent: Are We Watching the End of an Empire?